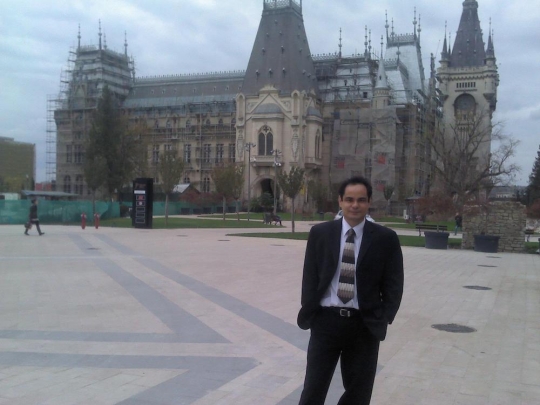 My name is Aldous Mina, I am a former US Peace Corps volunteer in Romania, and have worked in capacity building and market development.I am now engaged in economic development, foreign direct investments, and market entry in Central and Eastern Europe.

I was posted in the city of Iasi, Romania in 2008 to work with various NGO’s, Economic Development Agencies, EU and non-EU representative institutions, local and national government, chamber of commerce, foreign affairs agencies, universities and cultural outfits. I was under a US foreign diplomacy mission in the country.

The logistical aspect of the move was the toughest. I would say, preparing months in advance would make things a lot easier on someone looking to go overseas to either work and live. I believe doing research on proximity to grocery stores, post office, local transport, medical facilities, airline pre-requisites, etc would make the move a little more bearable. It is like starting all over again in a way, with the bare minimum, and being able to operate in the country at an optimum level.

The agency that I was with facilitated the housing arrangements, so that made a big difference. But as I speak to other expats, I’ve learned that most of them hired a rental agency to comb through the local market and provide them with various options from pricing, location of the property, and even the year the building was built. Some also have utilized online search engines to look up temporary housing, house sharing, roommates etc.

I was living in one of the largest cities in Romania, I’ve met expats who are mostly from Europe. Romania, being an emerging market, most professional expats who were living in my community were a part of an economic development institution or mission. Some also came to work temporarily for their companies to provide training to the local staff.

With this said, I am starting to see people from Asia, Africa, and the Middle East returning to Romania to work after graduating from Romanian universities or simply because Romanian businesses recruited them to work in labor-related industries.

The locals are always the best, both friendship-wise and as local market experts. They often invite me to come to local events, family gatherings and other social activities. They also helped me get acclimated and familiarized with the local culture. I often get corrected on my Romanian grammar, which has been very helpful in learning my fourth language. The locals are just as curious about me as I am with them, so having a long meaningful conversation is always expected when I float around in the city enjoying my new community.

I like that is provides me with a totally different life experience than that of big US cities. I lived in Washington DC, for a while, and while I loved the DC life, I often saw myself wanting to decompress and take things slowly. Being in an emerging country like Romania gives me both the rural and urban living experiences, but less of the violence and racial friction compared to America.

Living in a developing country is a mixed bag of experiences. You will meet highly educated and successful people, with the flip side of it, which is abject poverty and illiteracy. I have never been a fan of people dividing themselves because of social status, though that is often what I see living in Romania. Furthermore, because Romania is a developing country, you often deal with unpredictable situations, such as requirements on visa applications, housing issues, local transport etc.

Growing up in America, I have been exposed to virtually every culture there is on this planet. With this said, I moved to Romania thinking I wouldn’t have major issues in adjusting to the local culture, and as it turned out, I was in for a ride. Perhaps because when I came to Romania, they were just transitioning into a more Westernized society after decades of communism. The mindset and local mentality was fairly tricky to navigate. In the states, I got used to predictability and ease of operating under any and every condition. The opposite proved to be true for me in Romania and many parts of Eastern Europe.

I am the type of person who enjoys trying anything, food wise, at least once. So, let me put it this way, in Romania you will never only try food in one serving. Some of the most delicious food and healthy food I’ve eaten was in this South East European country. Romanians value healthy and natural food, so you often see their diet to be a mixture of fresh fruits, vegetables and homemade bread. Furthermore, an awesome soup that I often crave, called “ciorba de burta” is made out of tripe, egg yolk, vinegar, and beef broth, which is best served when the temperature is on the chilly side.

What advice would you give to anyone following in your footsteps

Patience, persistence, flexibility are words that I have come to embrace living in a developing country. Any person who is able to have a broader perspective in life would succeed anywhere on this planet, within any profession and living in any community. I would highly recommend to anyone to make it a point to experience life abroad at least once.

We now live in a very interesting time in human history. Never before have we had social media to provide us with a broader interpretation of our needs and wants in life. Living overseas would challenge you to look within and learn what you are really made of.

When I penned Faceconomics, a concept in economic development, that I infused with the use of social media, living overseas, working with various expats and their experiences, I never thought that new experiences and even industries would emerge just because foreigners are living in a foreign land. We are all expats if you really think about it, no one on this planet originated in their own land, not even the native Americans whose lineage is from Asia; they walked the land bridge aeons ago.

Continue my Faceconomics campaign in economic development by living and working overseas. I hope one day that expat living, knowledge transfer, amazing life experiences, investment opportunities and job creation will make this world a better place for everyone. Eradication of health issues, a more vibrant educational system, interconnected/smart communities, diminishing poverty, non-existent war and availability of water for all would be great causes to engage in, in the fourth industrial revolution.

You can keep up to date with Aldous' adventures on Facebook.