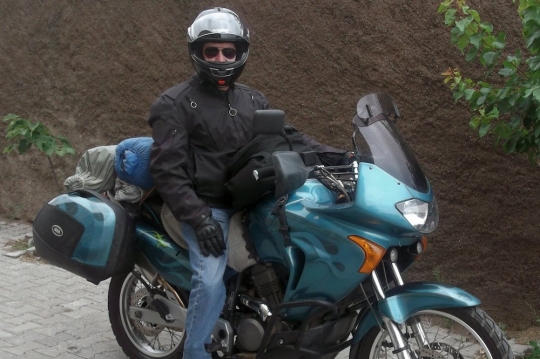 I am Harry Miller, a 63-year-old American originally from Colorado.

Initially, I moved to Elazig, Turkey, in September of 2010.Elazig is located in the eastern central part of the country about a 5-hour drive from the Syrian/Iraqi border. I moved to Turkey to accept an English language teaching position at a private school. After two years I accepted a teaching position at the local state university which lasted three years. I then moved to Bursa which is a large city on the western side of the country about three hours south of Istanbul by ferryboat. I presently work at the fourth largest university in the country.

There were not many challenges per se. I weeded through my worldly possessions. I gave away a bunch, donated a bunch and put the rest in a storage unit. Got a passport, bought an airline ticket and left. Fairly simple.

The school put me up in the local downtown hotel initially. I walked around looking for places to rent. Found a cheap apartment fairly quickly. The owner spoke marginal English, my first friend. I stayed there for only four months until I took over the apartment of another teacher who was moving. I inherited their furniture, linens and kitchen goods.

I was the first western foreigner in Elazig to live there. After about three years another American was hired at a language school but left after less than two years. Periodically there were a few foreigners that would come through. Sometimes in conjunction with the university or as tourists. I joined up with couchsurfing.com and being the only foreigner in the area, I was the person they contacted. Over the years, I had several wonderful guests all with unique stories.

For the majority of the locals, I was the first and only American they had ever talked to. The stereotypes they had of Americans were based entirely on the horrible “Action-Adventure” movies that are pirated and copied en masse. They assumed all Americans drank alcohol incessantly, were overweight, gun-shooting, car-crashing hedonists. I think I was a bit of a surprise for many. I immediately made friends with several people I still know today. I gained weight the first month from all the food and dinners I was given. The genuine curiosity, friendliness, and hospitality were wonderful. I was taken to so many coffee shops just so my new friends could practice their English.

Now that I am living in a big city, I miss living in Elazig. The apartment I spent three years in was a 20-minute walk to the university through a forest. The language school I started with two local English teachers was a 10-minute walk. My landlord always gave me food his wife made and I had a garden surrounding my apartment. We spent several cool evenings under the trees drinking tea. From my windows, I could pick sweet and sour cherries, apricots, plums, walnuts, and pomegranates.

Here in Bursa, it is crowded, noisy, lousy traffic, hot and humid. However, the money is much better and my situation is more prestigious. The overall redeeming thing about me living and teaching here in Turkey is that my summers are free and long. To date, I have ridden my motorcycle over 35,000km to all corners of the country. I camp along the way visiting historical sites, out of the way villages and some of the most beautiful scenery. To the best of my knowlege, I am the only foreigner (American) motorcycle rider in the country for what it’s worth.

The political situation can be frustrating. The Turks are a culture that has been ruled by so many empires, sultans, dictators and corrupt governments. The locals tend to shrug their shoulders and keep on with their lives as best they can. Religon is a strong part of the culture and the old traditions are strong which can be good but also can be a strangle hold on the younger generation who want more.

Living in Elazig was a lesson in patience when dealing with the government. Since I was the first foreigner, every visit to a government office was a adventure. In part because the bureaucrats had no idea what to do and each year the government changed the rules and requirements. The big city has many more foreigners but the red tape persists.

The drivers here are are a whole story in itself. The first year riding in the country was the most dangerous for me. I was thinking and acting as I would in the US, the Turks have a whole different set of driving rules and reactions. I think I’m a better motoryclist in part because of the persitant dangers riding here present on a daily basis.

There is a very different interaction between men and women. I learned never to offer my hand to shake unless she offers hers first. Because of my age, the younger people tend to be polite and respectful, but they tend to avoid me, married people have their lives in their homes I am not invited into because I am single. Men my age congregate in tea houses watching endless football games on TV, endless card games and cigarette smoking. They typically become very sedentary. I have no social life to speak of and spend a great deal of time by myself.

Turkish food is not what you see on the food channel shows. Everyday food consisits of a lot of bread, rice, potatoes, pastas. Meat, tomatoes, peppers, onions are a big part as well. Typically most food is prepared on top of the stove. Most meat is grilled and there is very little baking. It’s good food, but I get really tired of it. Most resturants serve the same foods. Only when you go to the upscale, modern parts of the city can you see other types and varieties of foods.

To eat anything out of the ordinary, you almost always have to go to tourist areas, the Europeans and Russians come to the resort areas by the thousands, or to Istanbul. I actually had some really good Chinese food there. Most Turks at the mention of Chinese food bring up eating dogs and insects, yet another sterotype I’ve tried to dispel.

No guts, no glory. I did not want a job that followed the usual pattern. Many (young) English teachers are more interested in filling their passports with lots of entry/exit stamps as souvenirs, I came here to start a new life and it has been better than I anticipated.

Being an old fart, my priorities are different than someone younger. Right now I am saving as much money as possible. I would like to buy another piece of property and build another home, but who knows?