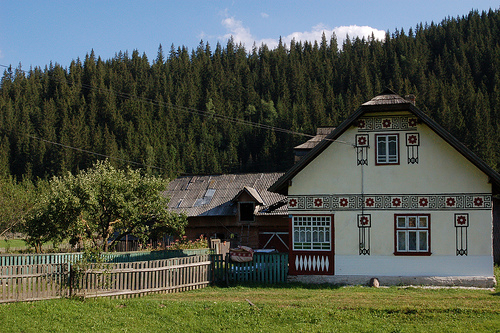 Romania serves as the meeting place of three main regions: Eastern Europe, Central Europe and the Balkans. However, it is not part of any of these regions, but has its own unique culture. Romanian culture has a deep historical legacy and much of it began with the Dacians, the ancient inhabitants of the region, and the Romans who later conquered the land.

Romanians today still have deep roots in their culture and traditions.There are traditions for every significant life event, such as weddings and baptisms, and religious festivals. Here are some cultural customs that are unique to Romania.

Weddings are an important celebration in Romanian society, and they feature some customs that might come as a surprise to newcomers. One such Romanian custom is kidnapping the bride. This is done by a group of guests, usually male, who set out to kidnap the bride at some point during the ceremony. There’s also a ransom involved, which could be either vodka or some other gift. The mock kidnappers conduct the negotiations with the groom over the phone and once the groom and his godfather pay the ransom, the bride is safely returned. The celebrations continue in full swing following the kidnapping event, which, contrary to its name, is actually a fun-filled custom that everyone looks forward to, including the bride.

The fir tree is an important part of Romanian traditions. At weddings, it is used to symbolize youth and dignity. On the night before the weddings, friends of the bride and groom take along six young firs and head to the godparents’ home. They either tie the firs to the yard gate or nail them there, and raise a toast to the bride and groom. The same ritual is done at the bride’s house. These firs are meant to remain in place until the couple’s first wedding anniversary. Each spouse chooses which fir represents them and based on how the firs change as time passes, their love for each other is determined. It is also supposed to indicate which spouse will die first, depending on which fir is the first to wither away.

This is another Romanian wedding tradition, practiced especially in some villages. According to this custom, the wedding party must pass near three fountains. If this is not possible, they must pass three crossroads, as this is believed to ensure a happy marriage. Once they reach the third fountain or crossroad, the bride splashes water on the wedding guests using a sprig of basil leaves. This is supposed to bestow blessings on the young unmarried guests. It is also believed to be a blessing of health and good fortune for everyone present.

This is an unusual New Year’s Eve tradition, the origin of which may be traced back to the 1930s when Romani travelling people came down from the mountains bringing bears on leashes with them. They visited homes and for a small tip, they would have the bear cubs walk on the backs of the villagers, in order to relieve them of back pain. The ritual came to be celebrated as the bear dance over the years and is believed to ward off evil spirits. A young man plays the role of the bear and wears a bearskin over his head and shoulders. There’s also someone who plays the role of bear leader, who orders the bear to dance. A band plays various tunes to which the ‘bear’ dances. At the end of the ritual, the bear dies and is revived, symbolizing the passing of the old year and ushering in of the new one.

This is another quirky New Year tradition where farmers in Romania can be seen talking to their animals. In the process many of them do get pushed away by the animals, but the one who manages to successfully communicate with his animals is believed to enjoy good fortune for the entire year. But there’s also a contrary view, which says that the farmers who succeed may be the unlucky ones. This is based on the superstition that those who hear their animals talk back, are struck with bad luck!

Those are a few of the cultural customs you may encounter in Romania. Have you lived there? Share your experiences in the comments.