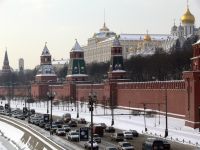 As the title and central action of the 1980 romance film Moscow Does Not Believe in Tears attest, the Russian capital has an aura of grim determinedness to it that seems to transcend historical eras. It is decidedly not for everyone: for those whose ideal urban experience is something like the bustling neon playgrounds of Tokyo or Kowloon, life in Moscow will require some adjustment. However, for those who are not complete creatures of convenience, and who value the intangibles of urban life as much as material amenities, Moscow can provide an excellent change of pace. Certainly many of the world’s highest earners seem to think so, as Forbes notes that Moscow is home to more billionaires than any other city in the world.

Moscow is laid out very much in the style of continental capitals like Berlin or Prague, i.e. it is comprised of concentric rings that decrease in functional importance the further they are removed from the urban core. Those residences closer to the core tend to be the more prestigious ones, yet similarity to the layout of American cities differs in that the immediate suburban regions are not particularly affluent.The outlying areas of Moscow, like Troitsky Administrative Okrug and Novomoskovy Administrative Okrug, are mainly assemblages of high-rise panel building ‘settlements’ indistinguishable from any others to be found in cities throughout the former Soviet Bloc.

Speaking of okrugs: these are the administrative divisions or districts that Moscow is divided into (there are six of them in all, with 125 constituent neighborhoods in total). The Red Square, St. Basil’s Cathedral and the presidential residency of the Kremlin are at the beating heart of Moscow, with the most important thoroughfares radiating outwards from the Boulevard Ring. Some districts, like Kitai-Gorod resting near Red Square, are mostly given over to business and do not even have any resident voters (making municipal elections a non-issue here).

Venture a little outside of the center and you will arrive at the Garden Ring, which claims some of the most popular residential neighborhoods in Moscow (to wit: Patriarch’s Ponds, Tverskaya, Chystye Prudy, and Arbat-Kropotkinskaya). All of these neighborhoods are in close proximity to the more modern Tretye Koltso [third ring] which contains Moscow’s only modernized highway.

The Patriarshiye Ponds [Patriarch’s Ponds] neighborhood is a bit misnamed, as there is only one actual pond there at present, but this minor inaccuracy shouldn’t hold back prospective residents from what is already a very popular neighborhood with expatriates. Thanks to its closeness to the Tverskaya Street business district, it is one of the go-to areas for wealthy Muscovites from within and throughout Russia. Once home to Russian literary titan Mikhail Bulgakov (who set the action of his seminal novel The Master and Margarita in this neighborhood), the neighborhood’s prestigious status is nothing new, and thus professional expatriates in the neighborhood can enjoy the opportunity to add to that prestige. Not everything about the neighborhood is fascinatingly picturesque, though: the Patriarch Apartments, crowned by a replica of the Constructivist artist Vladimir Tatlin’s famous Monument to the Third International, are one point of aesthetic contention among Moscow residents.

All in all, Patriarshiye Ponds is one of the most appropriate places for high earners who have already noticed that many relators’ property listings for “Moscow” are actually leading them to areas that, though comfortable, may be 25 miles outside of the city. One of these areas with high prestige, though not as conveniently located as Patriarshiye Ponds, is the Rublevka (or Rublyovka) neighborhood, which commands some of the highest real estate prices the world has to offer. If living outside of the city is not a tremendous problem, though, this neighborhood is noted not just for the high status of your potential neighbors there, but for its being “eco-friendly” in an environment that cannot always boast of this.

Back to Moscow proper, the Khamovikni district is another south-central district of the city where high-quality penthouses, manor houses and generally world-class urban residences can be found, ranging from the sublime to the outrageous. The best residences can be found particularly near Ostozhenka, and along the so-called ‘Golden Mile’. The nearby musea and cathedrals provide all sorts of opportunities for daily absorption of high Russian culture, and even the local metro station is decked out in chandeliers and marble (though you’ll find this isn’t exactly an anomaly within the city). Some of the more interesting relics of Moscow’s 1920s Constructivist phase, like the Kauchuk Factory Club, can also be found here bravely holding off demolition with the help of local preservation societies, and possibly some wealthy supporters. The Kauchuk Club is in fact still operative as a nightclub that you may want to explore if residing here.

Before you pack your things…an update on international affairs

As to possible ‘travel warnings’ applicable to expatriate professionals in Moscow, current U.S. residents may want to tread lightly in whatever neighborhood they reside in, and restrain whatever urges they may have to project boisterous Americanism. The embarrassing case of Ryan Fogle, a junior spy recently caught by the FSB whilst trying to recruit a Russian official with expertise in the hot spot of the north Caucasus, is emblematic of the Putin regime’s current need to posit itself as morally superior to the U.S. This does not augur too well for Russo-American relations in the near future, especially while the two powers take sharply divergent views on crises like the Syrian civil war. While you are likely to meet enough Russians in Moscow who do not unquestioningly accept the ‘official line’ presented by the more state-friendly segment of the media, you will also encounter a few Muscovites who do believe, for example, that protests of any stripe are secretly coordinated by U.S. sleeper cells in the country.