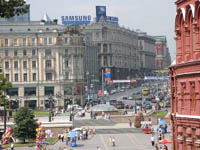 The entrance to the metro is generally just an underpass with a large “M” sign above it. The Moscow metro is quite extensive and the tickets are very cheap and can be purchased at the metro stations. Look for a ticket booth with the word ‘Kacca’ on it – you can buy multiple tickets (maximum of 60) for a number of journeys.

There is an emergency column at the centre of each metro station in case you require any assistance. The metro is very efficient and is probably your most economical option but rush hours are particularly brutal, unless you are used to taking the London tube or “the train” in NYC!Public transport in Moscow is affordable, popular and convenient. Unfortunately, this means that it is also very crowded and since there is limited seating space, it is likely that you will have to spend your journey packed in with the other passengers like sardines or as the Russians would say there’s no room for an apple to fall! Here’s a guide on how to make the most of the public transport system in Moscow.

The Moscow metro is second only to the Tokyo metro in terms of daily ridership. During peak times, the frequency of the metro trains is greater with a train arriving every two and a half minutes. The interval between trains increases and by night, you may have to wait for up to 15 minutes for a train.

The Trolleybus and Bus

There is an extensive bus network that radiates outwards from each metro station to ferry passengers to the surrounding residential zones. Each large street is served by a minimum of one bus route and function from 6:00 a.m. to 1:00 a.m. You can buy a ticket directly from the driver or you can buy it at a lower rate at the booths that are located at the bus stops and the metro stations. These booths also provide multi-ride cards which would further reduce the cost of each trip. If your commute requires you to make several transfers from the metro to a trolleybus and then to a bus (or tram), you should buy a “90 minute” ticket. With this ticket, you can make one entrance into the underground system and after that you can make an unlimited number of transfers on surface transport such as buses or trams within the 90 minute travel window. Alternatively, you could buy a unified ticket which can be used on the Metro, monorail and above-ground public transport.

Moscow had an extensive tram system in the early 1900s but with the introduction of the metro and trolleybuses, the tram network was greatly reduced. However, the tram service is still essential in some districts that require it in order to get to the nearest Metro station. The Moscow tramway network has 50 tramway routes that are divided into two sub-networks. The system provides vital cross links between metro lines. Like the Metro, the trams function from 5:30 a.m. to 1:00 a.m.

The marshrutka is a “routed taxi”, similar to Dollar Vans, that falls between private modes of transport and conventional buses. These taxicabs do not employ a taximeter and instead rides are paid per zone. The average marshrutka fare in Moscow is 35 roubles per person. Unlike the regular buses, marshrutkas travel at a faster speed and so they are a good option if you are late for a meeting. The noise insulation in most of these vehicles is quite poor, so make sure that you raise your voice when telling the driver your destination. You will also have to inform him when you wish to alight.

Gypsy cabs or “Chastniki” are an alternative to official and private taxis. You simply stand by the road and stick out your hand and wait for someone to stop! These “cabs” do not have any signs on them and the drivers are just regular people looking to make a buck. You will have to tell the driver where you want to go and then give him a quote – you may have to bargain for a few minutes before both of you can agree on a price. It is better to avoid this mode of transport if you are travelling at night or if the area is not very safe.