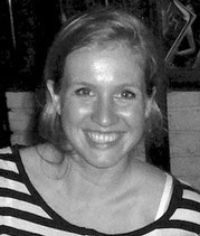 My name is Elske Swets. I am 30 years old, happily married and mother of a three-month-old daughter. I was born and raised in the north of The Netherlands and also studied there. I have a Master’s degree in Dutch Language and Literature from the Rijks Universiteit Groningen. After our studies my husband and I moved to Amsterdam, a great city, where we stayed until we decided to move to Singapore three years ago. After working as a marketing and communications manager for a couple of years, I am now a freelance marketing and communications consultant, working for both Dutch and Singaporean clients in various industries.Where, when and why did you move abroad?

My husband and I moved to Singapore three years ago, in June 2010. We were both looking for a new challenge and even though we thoroughly enjoyed life in Amsterdam, The Netherlands, we wanted to experience life in another city and another culture, preferably in Asia. We started looking for jobs in both Singapore and Hong Kong, because these cities appealed to us and because English is the main language in both cities, which would make our job hunt easier. We started our search and soon we both found an interesting job in Singapore and a couple of months later we moved!

We had to leave our beautiful apartment in Amsterdam behind and had to find renters for it. As we had no idea yet of housing in Singapore, so we decided to leave all our furniture and most of our other belongings behind, meaning we arrived in Singapore with nothing but two large suitcases with some clothes. The most difficult part of the move was, of course, to leave all of our great friends and family members behind. The flight from Amsterdam to Singapore takes almost thirteen hours, so we knew we wouldn’t be able to see them as often as we used to.

Friends of us were already living in Singapore and they offered us that we could stay at their place for the first couple of days. During those days we went house hunting with a French real estate agent. She was very helpful and was able to show us some nice options within our budget. We wanted to live near to an MRT station, because my husband would travel to work by MRT, and found a very nice apartment close to Lavender MRT, which is pretty close to the city center and also walking distance from a very nice neighborhood called Kampong Glam. We could easily walk to the shops and restaurants in this area after work, which was perfect for us! During our first two years in Singapore we’ve lived at this place. After that we moved to another area called Holland Village.

In the area we currently live, Holland Village, are a lot of expats. It is pretty close to international schools, like the German European School Singapore and the Hollandse School, and clubs like the British Club and the Hollandse Club. In Holland Village are quite a lot of landed houses, which means there are relatively more families living in this area compared to other, more urban parts of Singapore, where most people live in HDB flats or condominiums. Expats are generally not allowed to purchase an HDB flat (and most of them can’t be rented), which is why expats tend to stay in condo’s or landed houses.

Some of our neighbors are local Singaporeans. We greet each other in the hallways and lift, but other than that most people are pretty private. I also meet a lot of locals during work; about half of my colleagues are locals. Singaporeans are used to foreigners living in their country and even though there are some complaints that there are currently too many foreigners living in Singapore, Singaporeans are usually friendly and open to – and respect other cultures. I think that’s what they are used to since Chinese, Malay and Indian citizens have already been living and working together in Singapore for many years.

A lot! First of all, Singapore is a very safe city. There is hardly any crime. Secondly, the weather. It is always nice and warm in Singapore and the climate stays pretty much the same the entire year. Nothing like the cold and rainy autumns and winters in The Netherlands! Furthermore life in Singapore is very convenient; Singapore is a very service-oriented country. Taxis are cheap, so is eating out (no more cooking!), and most condos have a swimming pool, so after work you can take a plunge in your own pool! There aren’t many Dutchies who can do that…

I miss my family and friends back home. Especially now that we have a baby girl it is really a shame that our family only sees her a couple of times a year. Of course there’s Skype, but that’s of course not the same… Another downside of Singapore is that there are hardly any part-time jobs. In The Netherlands it is quite common for parents to work part-time, but here it’s definitely not. This means it’s all or nothing job-wise: you either work long hours and only see your kids in the evenings and weekends, or you don’t work at all.

Just do it! Living and working abroad is definitely an amazing experience and I think Singapore is one of the best places to live as an expat. It is one of the few foreign countries where the travelling spouses can also find a job and it’s a very safe and convenient place to live. Do make sure that your salary is up to the Singaporean standards, because the cost of living in Singapore is very high. Groceries and housing are for example at least twice as expensive as they are in The Netherlands and, in case you have kids, internationals school fees are very high.

That’s a very difficult question. Initially we thought we would only stay in Singapore for one or two years, but it has already been three years now and we still have no plans of leaving Singapore. We do sometimes long back to life in Europe, so I think eventually we will return to The Netherlands or maybe another European country. And when another interesting job opportunity elsewhere in the world comes by, that might also be an option. Since my husband and I both left our jobs in The Netherlands behind, moving back would mean that we would have to start all over again and in the current economic times in Europe that might be a challenge.