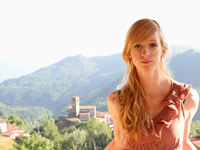 My name is Jessica and I am a twenty six year old freelance writer and photographer living in Antwerp. I am originally from the South Island of New Zealand, which is quite literally the located further than any other country from Belgium. In New Zealand I lived next to the Fiordland National Park, location of many of the Lord of the Rings sets, and enjoyed being so close to such an extraordinary landscape. I moved here with my daughter when she was two years old, and despite a short period spent in Germany, have been calling Antwerp home ever since.

I moved to Antwerp in the summer of 2006, and it’s sometimes hard to believe I’ve now been here for seven years.I moved to live closer to my mother who had married a Belgian man she’d met while living in Turkey. I’d always wanted to travel a lot and with new Zealand being so isolated trips abroad are more difficult to plan and finance. I wanted my daughter to grow up with a second language and have the experience of living in another culture. Because I was younger than 21 at the time I was eligible for citizenship because of my mother, and that was also part of my motivation to move.

Traveling with my daughter who was two at the time was undoubtedly the biggest challenge of the move. Thirty hours of flying, and another four hours of driving after we arrived in Paris was easily one of the most harrowing experiences of my life. Packing our lives into three suitcases also was something of a challenge. Not wanting to disrupt my daughters habits more than necessary the majority of luggage space was allocated to her books and toys and leaving behind most of my possessions was harder than I would have liked to admit. Arriving in Belgium itself presented no real challenges. Our permanent residency permits were organised during our first week here without any issue, and we had our ID cards only a few weeks later.

When we arrived we initially lived with my mother. Living in an apartment building for the first time was something of an adaptation to make. When we moved out finding a place was easier than I had worried might would be. Looking online I found most websites were also translated into English and all the real estate agents were friendly, spoke fluent English and were extremely helpful when giving viewings of the apartments. I called a few apartments I’d viewed online first and was able to usually able to make appointments to see them the same day I called. The agents helped with the process of signing a contract, and it was much simpler than I had expected.

The amount of expats living in Antwerp and surrounding cities is something that still surprises me. Antwerp is an exceptionally international city and even without going to expat sites or groups it’s been very easy to meet other expats. Just within the immediate area I’m living in alone we have neighbors from Turkey, England, Morocco and Italy. While there aren’t many other New Zealanders living here a lot of other expat nationalities here have large communities of their own, and the British expat community organises a lot of events and have their own theatre group which puts on regular performances at De Roma in the city.

In our immediate neighbourhood I feel I have a good relationship with many of the local store owners, and it really gives a feeling of belonging to the community to have the local florist, butcher or baker remember your name and usual orders. Initially my impression of the locals was that they were blunt and overbearing, but I now find myself appreciating their direct honesty and remarkable fluency in so many languages. When a Belgian says they only speak “a little” English or Spanish you’re generally safe in assuming they will be able to engage in a conversation on almost any topic. On the other hand, while I have some truly lovely Belgian friends I’ve found most Belgians to be closed off to developing closer friendships and I get the feeling that you have to know the locals for a very long time before they will consider calling you a friend or inviting you to their house.

On arriving here I liked the efforts made by the city to welcome expats. A mandatory integration course was somewhat tedious, but gave me a thorough outline of the essential aspects of living in Antwerp, and free language classes made my first year here much easier than it would otherwise have been. I love how international the city is, and how accessible it is for bikes. I like the school system and the options for children who have strengths in different areas, and of course the high standard of universities here and their affordability is really fantastic. I like the amount of events organised by the city, and look forward to the Zomer Van Antwerpen program each year, and the medieval re-enactments they stage at the park near my house.

The things I dislike about my expat life can mostly be put down to home sickness. I miss the familiarity of the things I grew up with, from Christmases in the summer to the food found in the super market. Coming from a country with a small population and a lot of wide open spaces I also often dislike the lack of space in the cities and the crowds whenever you go anywhere. One difficulty I’ve found while living here has been the sometimes frustratingly complicated and excessive bureaucracy. Simple processes such as changing addresses to live with a partner have taken months and required a lot of forms, visitations and numerous appointments at the District House.

I’d advise anyone planning to move to Belgium for any significant amount of time to take advantage of the language classes offered by the city. While people here make it easy to make do with English being able to speak the language makes it much nicer to live here. Antwerp and Brussels have been listed amongst the most traffic congested in the world, and road works frequently cause further delays and detours, so getting a bike and making use of the much better maintained bike paths, or investing in a pass for the train and tram can make life a lot easier too.

When I initially moved here I considered Belgium a temporary move while I decided where I’d really like to live, but seven years on it is beginning to feel as much like home as New Zealand did. My daughter is fluent in Dutch and considers herself a Belgian rather than a Kiwi, having spent the majority of her life her. I have recently met the loveliest Belgian man, so my plans, at least for the foreseeable future, will be to remain in this country which has become my second home, to continue improving my Dutch and perhaps at some point learn French as well.