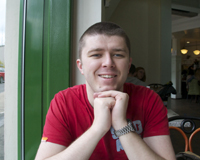 My name is Stuart and I’m from Scotland, in the United Kingdom. I grew up on the west coast in a town called Troon and studied Marketing at the University of Strathclyde. I’ve been working in the financial services industry for the last six years on various different technology projects.

I moved from Scotland to Singapore in April 2013 after having worked in Edinburgh for the previous three years.Before moving to Singapore I was actually contemplating a move to London. However, in May 2012 I visited Malaysia for the second time and my wife and I decided that we’d rather move to Southeast Asia. I love the warm climate and the food and they were big draws for moving away from the UK.

The biggest challenge was packing our lives up into two suitcases each. We decided not to ship anything from Scotland to Singapore – mostly due to the fact that we didn’t know what size of apartment we’d eventually get.

Before we arrived we researched propertyguru.com.sg extensively – and a few other property websites. However, we found out pretty quickly that the sites are somewhat out of date and contain either stock photos or computer renderings of buildings.

When we arrived one of our friends put us in touch with a real estate agent who was exceptionally helpful and not only got us a place to live, but also gave us excellent advice on commissions (and expensive deposits) that you don’t really get in the UK.

A few, as there is an international school near to where we stay. However, the local population far outweighs the expat community where I am living.

The first few times I went to local food court I got really funny looks when I asked for chilli with my food. Westerners don’t ask for chilli very often, apparently! There was a few surprises like that where you take the locals by surprise.

In my office, there are very few expats and most of my time is spent working with locals whom I get on with very well. Even they reacted a bit funny with my chilli requests though.

The weather; the food; the cheap and efficient public transport; and being able to visit many parts of Southeast Asia quickly and cheaply. It’s an eye opener.

I am also healthier than I was as a result of being able to go running in the (permanent) morning heat.

Working hours are slightly longer and are elongated by having to factor in European/American time zone for conference calls.

There are also two ATM networks in Singapore that aren’t interoperable. Local banks have their own (POSB, UOB, OCBC, and DBS) and international banks have another (HSBC, Citibank, Maybank, ANZ).

There is also a distinct lack of queuing on the underground at peak times. As a Brit, I love an orderly queue.

There is also no good wine in Singapore!

Singapore has been a very easy place to move to. It may even be one of the easiest places to move to in the world as I never experienced any hiccups on the way.

Sort out domestic affairs in your home country first and the my advice would be to simply go for it.

It has one of the best decisions of my life.

My plan is to explore Asia. I’m very fortunate to have had the opportunity to live in another country and I don’t intend to let it pass me by. I am heading to Vietnam in a few months and who knows where after that.

At some point I may try to learn Mandarin, but I think Singlish would be easier!