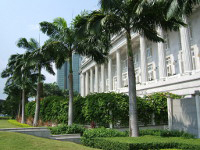 Expats are usually faced with the daunting task of adjusting to a foreign country with different laws and varied cultural traditions. It does take a while to adapt to an unfamiliar environment, and here is where expats clubs and associations play an important role. They serve as a support network and provide a place for people to connect with their communities, thereby taking care of the social, cultural, recreational and professional needs of their members.

Singapore is a modern and culturally diverse place, which allows expats to settle in quite easily. It also has many expat clubs that serve as a home away from home and greatly aid in the transition period that many people go through when they move to a new land. Here are the top 5 expat clubs in Singapore.American Association of Singapore (AAS)
10 Claymore Hill, Singapore 229573

The oldest American organization in Singapore, the American Association of Singapore, was founded in 1917 in order to generate community support for Americans away from home. Many American community organizations in Singapore came into being due to the efforts of the AAS. Some of these include the American Club, Singapore American School, American Women’s Association and American Chamber of Commerce. The AAS remains dedicated to enriching the experience of all expats living in Singapore, and about 40 percent of its members are non-American. Membership is open to people of all nationalities and this cultural diversity is also reflected in their staff and the activities they organize.

Established in 1956 and originally named the British European Association, the British Association of Singapore (BAS) quickly became a source of support to new residents and the local community. The association was instrumental in setting up the Gleneagles Hospital, the Tanglin club and the British club, which are all considered landmarks of modern-day Singapore. The club is a place for families and friends to mingle and participate in activities such as weekend tours and pub nights. There are a host of regular activities that take place, as well as some special events.

Started as a registered society in 1917 in the Colony of Singapore, the association formally became ANZA in 1948 and received official registration in 1961. With over 7000 members from different countries such as Australia, New Zealand, the United Kingdom, USA, Canada, Germany, South Africa and Singapore, the club functions as a meeting point for networking, socializing and recreation. Some of its activities include sports groups for children and adults and cultural tours around Singapore. Members can also volunteer at different charitable institutions such as Green Gecko, which works to empower street children and the Riverkids Foundation, which provides support to children living in slums in Phnom Penh.

The Singapore Cricket Club is a prominent social and sports club, located in the central business district. Founded in 1852, its first clubhouse was built in the 1860s, followed by another one in 1877. A third building was added in 1884 and today it serves as the core of the clubhouse. All of the clubhouses are located on the Padang. The club has above 3000 members and apart from cricket, soccer, field hockey and rugby are also played on its facilities on the Padang. It also provides facilities for other sports such as tennis, squash, snooker and billiards. Many international cricket, soccer and rugby events also take place at the club, including the Singapore Cricket Club International Rugby Sevens tournament.

The Hollandse Club or Dutch Club, established in 1908, has members belonging to more than 40 nationalities. The club is well known for its swimming pool and tennis courts. It also has a Chillout Room, especially popular among its younger members, which has facilities for playing pool and table tennis. Other facilities include a gym, multipurpose court, library, playground, restaurants and bars. Annual events include the Orange Ball held in April in celebration of Queen’s Day, an important Dutch national holiday. There’s also the May Fair and September Fair, where members can sample various Dutch delicacies.