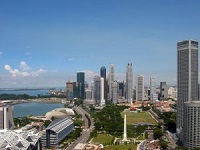 Singapore is ranked as the second-best expat destination in the world, with Switzerland being the best. This is not surprising, as Singapore provides expats with financial stability, high chances for career progression, and an excellent quality of life. Life in Singapore is sure to be an fun, rewarding adventure, but in order to help you adjust to your new environment, here are five things you should know before you make your move:

Most expats are warned about the culture shock they will face when moving to a new country, and are prepared for it, but there is often nothing that can truly prepare you for the extreme change in climate. British and American expats who are used to a continental or temperate climate find it tough to adjust to the heat and humidity of a tropical climate.Since Singapore lies almost directly on the equator, it does not have the usual distinction between 4 seasons, but instead has a tropical climate almost throughout the year. Although it can rain at almost any time in the year, there are two monsoon seasons, which last from June to September and from December to March. November is generally the wettest month, while April is the warmest month. The humidity levels are very high, and generally cross 90 per cent, which can cause a great deal of discomfort. The best way to deal with the high humidity levels is to wear loose-fitting clothes made of natural fibres. Singapore is 85 miles or 137 kilometres from the equator, and so the UV intensity is very high. It is important to use sunscreen religiously, as it is possible to get sunburnt even on overcast days.

While Singapore has scores of supermarkets and large grocery stores, their wet markets remain extremely popular, as they have a wide variety of produce coupled with very low prices. A wet market does not deal in durable goods such as clothes and electronics, but rather it exclusively sells fresh meat, vegetables, fruits and spices. Wet markets in Singapore open very early in the morning – generally at around 4 a.m. – and close by noon. In order to get the freshest produce, you would need to shop early in the morning. Tekka Market is Singapore’s largest and most culturally rich wet market with 284 stalls. In addition to the regular produce, you can also buy exotic produce such as jalapeno chillies and shark fins here. Unlike most wet markets that close at noon, Tekka is open right until late afternoon. The Chinatown wet market sells live crabs, lobsters, cockles and other shellfish, but it is most well-known for its exotic meats such as eels, turtles and even live frogs.

Singapore is a rather small country, and its population has been growing exponentially, which has led to a dire shortage in housing. This has forced the rates of property up, which has resulted in sky-high prices for public housing. To deal with the issues of overpopulation, most of the housing in Singapore is in high-rise buildings. The rent for an apartment in the heart of downtown Orchard Road can cost as much as 2,500 USD for a 1,100 sq ft apartment.

Singapore has a variety of “vice” taxes, and one of these is a very high tax on alcohol. While this allows the Singapore government to rein in the consumption of alcohol and increase their revenue, it means that drinking is a very expensive activity, especially if you are an expat from a country where alcohol is a large part of life. Alcoholic beverages and drinks are most expensive at bars and nightclubs, where a single beer can cost you upwards of 15 USD. Since this can put a serious crimp in your social life, it would be best to take advantage of Happy Hour promotions where you get a free drink along with every drink you buy. Female patrons can take advantage of ladies’ nights (Wednesday), where most bars offer free drinks for women. The cheapest place for a beer would be at a hawker centre, where a large bottle of a locally-brewed beer would cost approximately 5.20 USD.

Chewing gum is banned in Singapore, and it is a law that is strictly enforced. When the ban first came into effect in 1992, it covered every type of chewing gum. However, in 2004, the law was revised so that people can now purchase chewing gum of therapeutic value, such as dental health gum, as long as it is sold by a dentist or pharmacist, and the names of the buyers are recorded. Importing chewing gum is also prohibited, and chewing gum cannot be bought or sold in Singapore. Spitting gum on the streets can bring you a fine of 500 USD. The main reason for this ban is because vandals would stick wads of chewing gum to the sensors of the doors of MRT trains, which would prevent the doors from closing, thus causing a disruption in services. While most people may not have an issue with this ban, people who are used to chewing gum on a daily basis may find it difficult to deal with the sudden change.