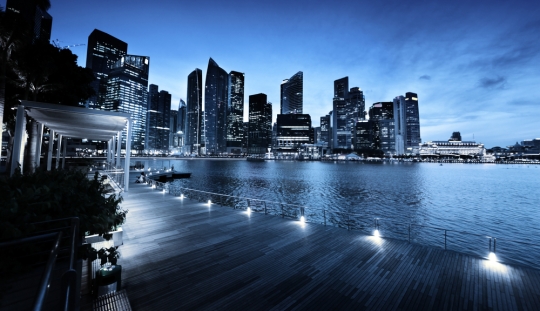 It may be clichéd to say that Singapore is where east meets west, but the cliché has been true for centuries. The Lion City was a strategic trading post when sailing ships raced to bring silks, teas and spices back to Europe. In recent years, the city-state became an economic titan, with billions of dollars of financial trades buzzing through the veins of this small-but-mighty nation.Depending on which survey you read, Singapore has even eclipsed Hong Kong as the top destination for money-motivated expats. Although the cost of living is high, the salaries on offer have been astronomical for expats with the right CV. However, this seems to be changing.

Part of the reason for Singapore’s success is its unique way of adopting cultures and traditions, weaving them into the fabric of the nation’s identity. You can stumble through as a monoglot English speaker, but prepare to be surrounded by Malay, Cantonese, Hindi and a raft of languages spoken by temporary residents.

This has made Singapore a strategic crossroads for business. Not only is there a multilingual, highly-skilled local workforce, historical links with the UK and the west, but the nation sits in a time zone that helps trade across Asia. Starting work in the morning, you’ll find Tokyo still at her desk, while by lunchtime Mumbai will logging on. In fact, the trading links extend much further, to Australia, Europe and Stateside too.

Expats have flocked to the bright lights of the boomtown city, but the appeal may be dimming as the financial incentives diminish. Globally there is a form of ‘price adjustment’ taking place, with the bucket loads of cash once offered to highly-skilled expats shrinking to more modest amounts.

The Emirates and Saudi Arabia, for example, are altering visa rules to encourage businesses to hire local talent, making it less appealing to bring in overseas experts. Thus, contracts are getting shorter and companies are offering less in remuneration.

In Singapore this effect has been labelled a ‘salary crash’. According to HSBC, expat salaries fell 15 percent in 2017 alone, accelerating a trend that has been evident for a number of years.

While Singapore used to be fourth in the world for offering the most generous expat remuneration packages, these adjustments knock it down to number 10. This leaves the Lion City whimpering behind Switzerland, India, China and long-time rival Hong Kong. These figures represent average salaries across expats working in roles across all sectors, representing an average decrease in income from USD$138,641 to USD$117,904 in one year.

Putting these numbers into context, the typical expat salary for middle managers is now USD$235,500, compared with USD$265,500 in Hong Kong. This puts Singapore at a five-year low for expat take-home pay.

This isn’t as awful as it first sounds, as the city-state is famous for its low rate of taxation, making the cost of living cheaper than many other business hubs in the region. For businesses, the total cost of remuneration for expat employees has come down even more. This is largely due to currency fluctuations.

Despite international school fees creeping up, other savings have helped balance the books. ECA International, a global HR consultancy, advise big business on managing expat staff. Lee Quane, Asia director for ECA, explained that most of these savings have been made in the property employers rent on their workers’ behalf. He says that the “overall cost of benefits packages has fallen in USD terms by 10 per cent over a five-year period due to expatriate accommodation rental prices declining.”

Japan, on the other hand, has seen the cost of employing expats rise by about 12 percent thanks to the yen’s rise against the dollar.

The rise and fall of international mega-economics have created a slightly muddled picture for expats. Although the cost of living has gone down, the salaries paid out have dropped even further and employers are saving an estimated USD$12,000 compared to last year.

At the macro scale, individual expats are struggling to make ends meet. Singapore Business Review (SBR) published an article referring to “crazy poor expats” and the dire straits some are suddenly finding themselves in.

Although the cost of accommodation has fallen in the Singaporean market, this has resulted in a cutting of the accommodation support paid to expats. British-born Kieran Hughes told SBR that he has seen his take-home salary slashed whilst working as a project manager at an audio-visual company, earning under USD$3,000 a month. To live comfortably, expats recommend an income closer to USD$4,000 a month.

Hughes is able to pay rent on a tiny dwelling and cover the basics, but describes his lifestyle as “barely living”. Even income from back home is not helping, “I have a three-bedroom house in the UK with a big garden front and back and I rent it out for approx. $1,000 dollars a month,” he told SBR. “Here in Singapore, you can barely get a bedroom in a shared apartment for that kind of price.”

Another factor that may be driving down the expat salary is the increase in talent coming into Singapore from other Asian nations. Rapid business growth in India and China means these countries are exporting talent in a new wave of expats. Singapore herself is adding talented, multilingual graduates to the workforce, many of whom are now climbing up the business ranks. Without the need to beat salaries in expensive western countries, it is conceivable that this could have a chilling effect on salaries overall.

There’s a great many factors at play in this picture, and nobody can point to the one that is having the biggest effect on expat salaries. If the trend continues, salaries will fall even further, potentially to levels that make Singapore a less attractive prospect for many.

Whilst many opportunities are still on the table for expats, they don’t necessarily come with the giant pay packets they once did. The global expat squeeze is gathering pace and Singapore is starting to feel the purse strings tighten.