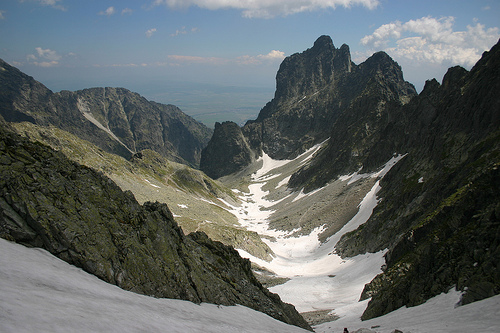 A small country in Central Europe, the region now known as Slovakia was once part of the Czech Republic. Since its independence in 1993, this country has become popular among tourists and expats. In terms of economy and development, Slovakia is doing exceptionally well, and when it comes to natural and cultural heritage, it is incredibly rich and diverse. This combination is a draw for people from around the world who are looking for a good quality of life in a new country.Here are the five main reasons we think you may want to move to Slovakia.

For such a small country, Slovakia has a surprising amount of variety in its food. Especially if you love meat and dairy, you’ll have a great time exploring the local cuisine, which varies from one region to the next. The local meats and cheeses are delicious, and there are also several traditional sweets that are worth trying, even though some of them are difficult to find commercially. You’ll also get a chance to try foods from Slovakia’s neighbors – the Czech Republic, Austria, Hungary, Ukraine, and Poland – and local foods that have been influenced by the food traditions of these countries.

Slovak beverages deserve their own separate mention. First of all, there’s Kofola, sometimes unfairly described as the local version of Coca-Cola. However, approaching it with that idea in your head is almost certainly a path to hating it. Kofola is a unique and different beverage from the more familiar international colas, and there are plenty of expats who love it, as well as tourists who take a few bottles home. There are other local non-alcoholic beverages to explore too. But the most exciting are the wines, beers, and spirits. You will of course find plenty of amazing Czech beer in Slovakia, but the local beers are great too, even if they’re not as well known. Slovak wine too is relatively unknown outside the country, but is often of great quality. There are also the Slovak brandies, vodkas, liqueurs, and other spirits, including a variety of homemade alcoholic drinks.

The cost of living

Unlike most other developed, economically robust European countries, Slovakia is quite cheap to live in. The country is arguably not as cheap as it used to be, but it’s still possible to maintain a decent day-to-day standard of living, explore the local food, drink, and culture, indulge in a bit of travel across the country, and yet not use up all your earnings.

The Slovak landscape and countryside

Slovakia is landlocked, so it has no beaches; however it more than makes up for that with its gorgeous mountains. The landscape is almost entirely mountainous, with many hiking and skiing regions, a number of national parks, and several lakes and rivers with stunning popular locations. The mostly temperate climate makes travel quite painless and convenient, especially since most of the popular locations are well connected by train. Even apart from the country’s natural beauty, there is plenty to see – castles, churches, and other historic structures.

The country’s location within Europe

Slovakia doesn’t really need points for its neighbors – it has more than enough to recommend it for itself. However, it’s worth mentioning that while you’re based here, you’ll have the opportunity to visit all the neighboring countries easily, cheaply, and quickly. No matter where in Slovakia you live, you’ll almost certainly be able to manage short trips to the Czech Republic, Austria, Hungary, Ukraine, and Poland, as well as other European countries that are a bit further away. Many of Europe’s greatest cities are near enough for a comfortable weekend trip.

If you’re looking for a new country to call home, Slovakia is definitely an option worth considering. However, just for the sake of balance, here’s one reason it may not be a great choice: the pollution. A recent report on air pollution in Europe placed Slovakia near the bottom of the list in terms of its air quality, ahead of only Poland and Bulgaria. Of course air quality varies from one location to the next – the air up in the mountains is usually great, and the air in the cities is usually the worst. However, most expats tend to be located in the cities, and if you have small children, the pollution might be one reason you should stay away from Slovakia.