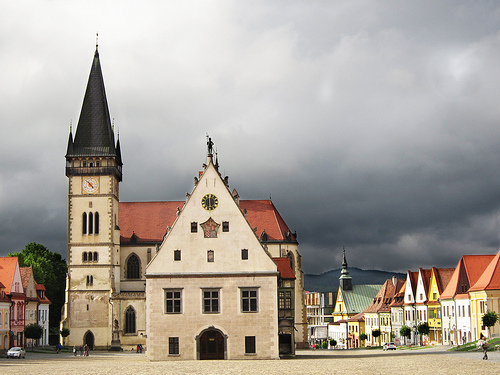 Slovakia is perhaps a bit unusual when it comes to religion. Although there’s plenty of variation from one country to the next, on the whole many European countries are quite secular in nature. In Slovakia however, a sizable part of the population still describe themselves as belonging to a religious group, and although this does not mean everyone is an active participant, it still makes it one of the more religious European nations.The contrast is particularly dramatic when Slovakia is compared to its neighbor, the Czech Republic, whose population is described as among the least religious in the world. What makes the contrast especially interesting is of course the fact that the two aren’t simply neighbors but were one country until relatively recently; in 1993, Czechoslovakia dissolved to form the Czech Republic and Slovakia.

The main religion in Slovakia is Christianity, mainly Roman Catholicism, with others belonging to the Greek Catholic Church, the Eastern Orthodox Church, and a few more churches. Other religions in the country include Islam and Judaism, but these make up less than 1% of the population. Atheists and other non-religious people also form a sizeable group.

Christianity in Slovakia goes back almost to the beginnings of the religion. Since those beginnings, it has grown tremendously to become the main religion in the region. Roman Catholicism eventually became the main religion in Slovakia, but there have always been a substantial number of people belonging to various Protestant and other Christian groups. By the beginning of the Communist era, around two thirds of the population was Roman Catholic, and the Protestants were a large minority. The communist government of course discouraged and actively opposed religious faith and activities, with lots of persecution, including takeovers of institutions and imprisonment of priests.

Today of course the situation is vastly different. Although the communist government wasn’t as successful as it hoped to be in decreasing the influence and appeal of religion, the number of believers is considerably smaller today than it was in the 1940s. However, people can freely practice their religion today, and Slovakia has a greater number of self-professed Christians of various sects than most other European countries. Most villages still have their own churches, and although attendance may not always be high, it is enough to sustain the community.

Roman Catholics make up 62% of the population in Slovakia, followed by people belonging to the Evangelical Church of the Augsburg Confession in Slovakia (Evanjelická cirkev augsburského vyznania na Slovensku or ECAV in Slovak), who make up only 5.9% of the population. The Slovak Greek Catholic Church is next, followed by a few other Christian sects including the Jehovah’s Witnesses and the Evangelical Methodists. Although these numbers are high, most Christians do not actually go to church regularly. It is estimated that only a third of the members of any church actually participate in church services on a regular basis. The rest visit church only on special occasions, such as religious feasts, weddings, and funerals.

Slovakia has a small Muslim population of less than half a percent. It is estimated that there are only 5,000 Muslims in the country, and most of them live in the capital, Bratislava. Most Muslims are also not natives – many are refugees, migrant workers, and students. There are very few (and small) Muslim communities outside Bratislava, and it is difficult to find mosques outside the capital too.

The Jewish community in Slovakia is even smaller than the Muslim community – there are only around 2,000 Jews in country today. Slovakia once had a substantial Jewish population, but many left after World War II, and more continued to leave during the succeeding decades, especially under communism. Many synagogues remain, but most of them are shut and/or in ruins, and religious services are conducted in only a handful of them.

Atheists, Agnostics and Other Religions

The atheist, agnostic, and irreligious community in Slovakia isn’t as large as it is in the Czech Republic, but it’s still a fairly substantial 13.4%. However, the numbers aren’t entirely clear, and many claim the government either actively or subtly discriminates against this community. By some estimates, all non-religious groups together account for at least 30% of the entire population.

There are also a miniscule number of Buddhists and Hindus in Slovakia.