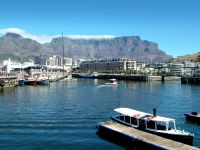 South Africa, ranking 25th in total landmass among world nations, is at the very least a spacious country. Though the best of the nation’s landscape is along the coastline, rather than in the brushy flatland that typifies the interior, there is ample room within both the interior and the crescent of verdant coastal land to host several cities with working opportunities for expatriates.

At least two major cities, Johannesburg and Pretoria, are located in the inland Gauteng province, which is easily the richest in South Africa due to these cities’ inclusion. Johannesburg is not one of the three capital cities of the nation (these being Bloemfontein, Pretoria and Cape Town), yet is the largest city in the world not to be situated on a major body of water. Since the city annexed apartheid-era enclave of Soweto, it has expanded to a population of nearly 11 million.The usual picture postcard view of the city refers to the lightning that constantly illuminates it, though this is hardly the only noteworthy aspect of life here (and its status as the world’s “lightning capital” remains hotly contested).

Johannesburg is the only African city to be listed in MasterCard’s list of 50 global cities for doing business, which means work here will involve networking with the best and brightest from the whole African continent, and other continents as well. The city represents the communications hub of South Africa, making it an obvious choice for either journalistic employees or digital communications experts.

All this aside, many find the crime rate in Johannesburg not at all to their liking, and even the bravest souls still prefer a more naturally photogenic living environment. Cape Town is perhaps the most notable alternative to ‘Jo’Burg’, particularly in the natural scenery that the area has come to be known for. All the beachfront amenities you might expect can be found along the False Bay coast, and the high chances of encountering some friendly wildlife around Boulders Beach (e.g. penguins) make the area perhaps one of the best in the country for families with young children.

Table Mountain, which is deemed an important enough part of the local environment represented in the Cape Town flag, is ideal for hiking and for cableway journeys. The already enviable location of Cape Town is complemented by the city’s recognition as a cutting-edge leader of urban design: this has most recently been confirmed with the International Council of Societies of Industrial Design naming Cape Town the “World Design Capital” for 2014. Alayne Reesberg, the Chief Executive Officer of Cape Town Design appointed by the city, is currently charged with the ambitious task of keeping the city competitive with past winners such as Seoul, Torino and Helsinki. The city’s prestige in this area makes it a city of great interest for architects, urban planners and others in the development and real estate businesses.

Speaking of which – some unequivocally luxurious real estate is also to be found here in exclusive enclaves like Upper Constantia and The Glen in Camps Bay: many of the properties listed for sale are being sold by the prestigious Sotheby’s International Realty, and are either of the “price available upon request” variety or in the tens of millions of dollars. If your earnings allow for this kind of expenditure, then these are the SA neighborhoods in which you will most likely want to settle. Just a quick browse through the realtors’ listings for such homes will dispel the notion that South Africa is a wall-to-wall dystopia of the kind used for the backdrop in the film District 9 (filmed on location in Johannesburg).

Sotheby’s currently only has one property for sale in Pretoria (which, when compared to the prices commanded by the Upper Constantia rates, is practically a bargain at $1 million USD). That is not to say that Pretoria has nothing to offer to well-heeled expatriates. One attraction to Pretoria is the degree to which it is serviced by ultra-modern rail transport, including the luxury ‘safari’ line Rovos Rail and the Blue Train connecting Cape Town with Johannesburg. Those who find the shinkansen [bullet trains] of modern Japan to be a pampered ride will find them simply pedestrian when compared to the Blue Train’s amenities, which include full butler service.

As to the city itself, it is a visually interesting one with distinct architectural styles melting into one another, and a healthy amount of urban greenery resulting from the generous planting of Jacaranda trees. The business districts in Pretoria are divided between the suburbs and the city center, and though the city is well-known as a governmental or administrative capital, it is a potential workplace for career diplomats as well as executives or experienced consultants with knowledge of manufacturing (particularly metals.)

Durban is another port city – in the north-eastern KwaZulu-Natal province this time – which has earned a reputation among tourists, and is close enough to Johannesburg to allow that city’s residents for relaxation-oriented getaways (and, alternately, for executives who do business in Johannesburg and don’t have a fixed schedule that requires long daily commutes to an office there). Though it’s maybe unfair to use Johannesburg again as a negative point of comparison, Durban provides far more “breathing room” for its residents – that is to say, a far lower population density and significantly less traffic.

Of course, the flipside to this is that the city will be less walkable, though this alone should not disqualify it from individuals interested in South African life. The annual Vuna Award, handed out to South African municipalities for their improvements in infrastructure, good governance and financial stability, has twice been conferred upon the city in recent memory, which should give prospective residents a good idea of the city’s amenities. More importantly, they should give one an idea of the local possibilities for employment in areas such as construction/ urban development.