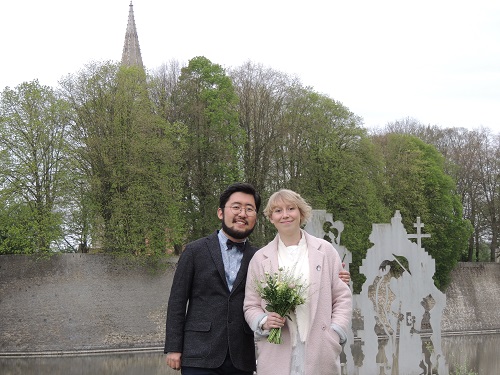 My name is Marie, I’m 24 years old from Belgium.I’m totally in love with travelling and I’m a designer and the blogger behind Be Marie Korea.

I moved abroad for the first time when I was 20 years old. While doing my bachelor degree in BSc Industrial Design in Belgium I was offered the opportunity to finish my final year in England. An opportunity I haven’t regretted a single second of my life.

After this year I wanted to continue my adventure abroad and did my MSc in Medical Product Design at the same university in the UK. The moment I found out I had won a scholarship to go to China for a summer school, I couldn’t have been more excited. This allowed me to travel to Korea and Japan.

On my trip to Korea, I stayed in a small guesthouse in the South of Korea which was owned by my “now” husband. As it was off season, he had enough time to show me around for the 5 days I was there. We had an instant click and continued our long distance relationship for almost 2 years. During those years I started my first job in London as a Design Engineer, so my free time became more and more scarce. Every opportunity we had we called or texted and even managed to spend our holidays together in England, Belgium, Thailand and Korea.

This period has probably been one of the biggest challenges of my life. It’s hard to explain, but to me it felt like I was incomplete, like everything didn’t matter when Evan wasn’t there next to me; or at least in the same country. Making that step, to quit everything, to leave everything behind and move to the other side of the world, to someone you haven’t spent that much time with was extremely challenging. Logically it didn’t make sense, but it felt right, which was quite a big internal battle I had to overcome.

The first months of my life in Korea were the most difficult. First of all I moved from London, a world city, to Gyeongju, a small country city with almost nothing to do. So adapting to this new life style and environment was almost impossible for me. The only job options I had here were teaching, which I liked, but it wasn’t my passion. I’m a designer, in heart and soul. Take that away from me and you’ll take away a part of my happiness. We only lived in Gyeongju for 5 months, as we decided together it would be better for me and us to live and work in the capital Seoul.

The second thing I struggled with was the food. My Belgian stomach was totally not prepared for this spiciness; on top of that I was a vegetarian. If you know a little about the Korean cuisine you will know it is very hard to find food that isn’t spicy and doesn’t have any meat in it. Especially in Gyeongju, a city with only a few foreigners and a couple of foreign food restaurants. I had stomach problems almost every single day! Even ended up in the hospital a couple of times as I couldn’t stop throwing up. Not the most pleasant experience in my life.

The last thing that was a bit of a barrier were my new parents in law. They tried, but I’m not Korean; and at that time I didn’t know the customs, the language, the social standards, etc. They really wanted me to behave like a Korean, which I understand as they didn’t have that much experience with foreigners, but I couldn’t meet their expectations and we couldn’t communicate. I felt really stressed as I was forced to eat meat, I had to eat the spicy food, I had to behave and respect them the way Koreans would… which didn’t really have a happy ending.

There were quite a few foreigners in Gyeongju, but it was really hard to find them and get in their friend group. In Gyeongju, most people stay there for a year to teach English and then move to a bigger city or back home. So people who were living there more long term weren’t really interested in expanding their friend group to the short term newbies; and I don’t blame them, it’s hard to constantly say goodbye as an expat.

Well, now I’m living in Seoul, which I’m absolutely loving. There are many foreigners, many events and a lot of foreign food restaurants. And most importantly my job, I’m working as a freelancer building websites, doing graphic design, managing SNS and running my own blog. Life in Seoul is so much easier, everything is so much easier. People speak English, they are open minded towards foreigners. It is so much easier to fit in here, to be welcome and wanted.

Expat life isn’t always easy, I guess the moments I’m longing for home is when I’m struggling with getting simple things done; like going to the doctor.

Going back home is also a bit of a hassle; I’m not a fan of long haul flights, they are very tiring and expensive. The internet is what I rely on for keeping contact with my family back home. I guess that’s also one of the main reasons I started my blog and Instagram, so my family can check what I’m up to whenever they want.

Korea is so different compared to England and Belgium, in every way; the food, the people, the language. But the biggest difference would be the mentality. The way people behave in society and towards each other. Keeping your face, something I still not really understand, is vital in Korean society. I feel like people are trying to over-prove their wealth and “normal life without problems”, like the perfect happy rich family.

After one year I will proudly say that I love Korean food and Korean meat; that I even crave for a spicy soup when I didn’t have it in a while. Korea has slowly conquered my taste palate. There aren’t many things now that I dislike, but I’m still a little wary of trying intestines and chicken/pig feet.

Try to learn the language and the culture before moving. Especially when moving to a smaller city, where making friends and doing daily things will be a challenge, be mentally prepared for this. Try to connect to people in that city to get advice on activities or meet ups.

I love living in Seoul, so hopefully we will live here at least a couple of years. So my plan for the future is to grow my blog to a full time job, I know it’s a big dream but I am convinced this is achievable.

You can keep up to date with Marie's adventures on her website, Be Marie Korea.