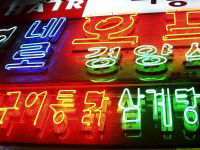 So you plan to pack up and move to Korea? Great! Just remember, everything might not go according to plan. I had planned to go for one year, and told everyone I’d be home soon. Seven years later, I finally left. I also met people who didn’t last a year, and returned home after 6 months, unable to adjust to life in the Land of the Morning Calm. Based on my own years of experience, here are 5 things every expat should know when they board a plane with a one-way ticket to Seoul.

1. Listen to the Voice of Experience – Maybe

If you apply for a job, talk to as many current and former employees as you can. If a whole chorus of current employees is speaking up about problems with working conditions, late payments or other serious issues – listen to them, and look for another position.But, be sensible. Try to separate what current employees tell you from how they feel about what they tell you. Confusing? Probably, but here’s why I mention it: I landed one of the best jobs I had after an ex-employee began warning other job-seekers away. He complained bitterly that the school was out in the middle of nowhere, and the apartments were too small. Although his tone painted an awful picture, when I thought about it, his criticisms didn’t seem too bad. I’m not a big-city girl, and the peace and quiet of the countryside would appeal to me. I didn’t care if the apartments were small; I’d been sharing a flat with other co-workers for a year, and wanted a place of my own. That position actually suited me perfectly, and is the reason I stayed so long.

Expats in Korea come and go with amazing frequency. After 4 months, you’ll still feel like you’ve just arrived…until you’re out for dinner one night and realize everyone else at your table is even newer than you. Suddenly, you discover you’re the voice of experience. On one hand, this turnover allows you to meet a lot of new people. The shared expat experience means you make friends with people you might normally not have contact with. The downside is that you’ll feel like you’re constantly saying goodbye. Do your best to maintain friendships with loved ones back home, and try to build friendships with positive people who plan to stick around as long as you.

3. Learn at Least a Little Language

I know that learning a language takes an immense amount of time and energy. It isn’t something you can just add to a to-do list. The Korean alphabet and grammar are completely different from what you’re used to, but don’t worry. No one expects you to become fluent, but learning the basics will help. Here’s the quick’n’dirty guide to mastering the basics:
Step 1: Shop in local markets. Sure, Korea has big box stores that look a lot like stores at home. You can get everything you need with no trouble…and you’ll never have to speak to anyone. Instead, try to get what you can at smaller shops, where you’ll have to interact with people who might not speak much English. If nothing else, you’ll pick up numbers, and the words for daily necessities.
Step 2: Learn to read. The Korean writing system might look complicated, but it’s surprisingly easy to learn. You’ll be able to sound out words in just a few hours. After that, reading signs and labels is a breeze. Korean also borrows a lot of words from English, so even if your Korean vocabulary is still small, when you start reading, you’ll recognize more words than you think! (‘Big Sale’ was always nice to see.)

By the weekend, you’ll probably be exhausted. On top of what you put into your work, navigating another culture takes a lot of energy. Everyday tasks you could perform at home without a second thought now require deliberate attention as you figure out how things are done in Korea. It might not seem like much, but you might find yourself on Friday night thinking, “Why am I so tired??” Instead of spending the weekend sprawled out on your sofa, get out of town. Trains in Korea are incredibly efficient and inexpensive. Throw your toothbrush and a pair of pajamas in a backpack, and head somewhere new. There is almost always some kind of festival going on. (The Lantern Festival in Jinju, the Paper Festival in Jeonju and the Mud Festival in Boreang were my favourites.) It might seem like a weekend trip is too much bother for your exhausted self, but believe me, the break from routine is well worth the effort.

5. Some Things Will Never Make Sense – and That’s Okay

Don’t get caught in the trap of thinking your way is the right way. For a while, Korean busses drove me crazy. I hated that they drove so fast, jumped queues at stop lights, and peeled away from the curb before passengers even sat down. One day, I met a Korean who had recently returned from a year in Canada. I asked him if there was anything he didn’t like about it, and was surprised when he immediately said, “the busses!” He hated that they drove so slowly, waited behind long lines of cars at stop lights, and wasted precious time while passengers found their seats. Take the time to see things from a local’s perspective, you might still disagree, but you’ll have a better understanding of why things happen the way they do.