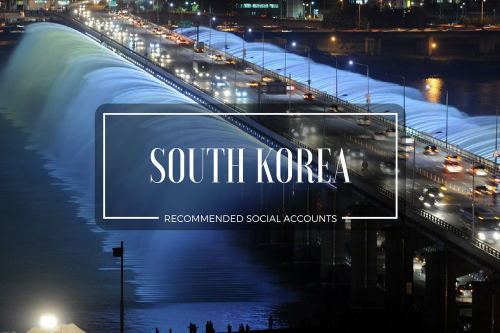 At Expat Focus, we like to be on the lookout for resources around the web that could help prospective expats adjust to their new countries. Today, we’re taking a look at South Korea and some of the social media accounts you should be following if you’re thinking of moving there.Linda Goes East
Facebook Page | Twitter | Instagram

Linda is a passionate traveler living in South Korea, who is half German, half American and has visited 20+ countries. Her beautiful social media accounts and blog will inspire travel lust and not a small amount of envy – as well as sharing her story of love that brought her halfway around the world to become an expat.

Founded in Seoul in 2000 by foreign women who are married to Korean men, this Facebook Page and Group consists of multicultural members representing various nationalities and ethnicities, simply forming a supportive alliance of spouses settling into a new culture. ISKA claims to represent a truly multicultural, multiethnic, and multiracial demographic in South Korea – they are also really friendly and helpful for new and settled expats alike.

The Expat Squad are a collective of bloggers who are based in different parts of the globe with a common goal: to share life and travel experiences to people who want to visit or live in a specific country. The authors are composed of Filipinos living in South Korea, Japan, Czech Republic, Germany, France, and Saudi Arabia. The South Korean author is currently in South Korea for her Doctoral studies.

Known as a foodie hub of Asia, the creators of Mango Plate realized the lack of a medium that connects foreigners and expats to the Korean food scene. They simply want to help bridge that gap and help people become familiar with the ever-changing food scene in Korea. With a definite penchant for fun, an often updated blog and an extensive palate, this is definitely a handy account to keep in pocket.

Hannah is a British girl living and working in Seoul, South Korea, sharing many tidbits about expat life in the Korean capital, places to visit, things to do and foods to eat. She has a serious case of wanderlust, and also shares her adventures along the way. Alongside her travel diaries and recommendations, she also writes about life as a foreigner – posts like “Expat guilt and how I’m trying to beat it.”

A non-profit organisation funded by the Korean government, Cultural Exchange & Volunteer in Korea is an open group for everyone who would like to participate in various volunteer activities, group traveling, or cultural & language exchanges. For all the expats in Korea, they offer various programs giving a chance to experience Korean culture profoundly. They also share interesting festivals that will be of interest to travellers.

With 82,000 fans and followers, this site claims to be Korea’s No.1 English-language daily and shares breaking news, in-depth stories about politics, national news, economy, showbiz and more. With frequent updates and highly engaged followers, it is a fantastic resource for English speaking expats who like to keep abreast of national and local events.

Calling herself a newbie travel blogger/expat (though writing well-crafted blog posts that bely her inexperience), Cil is a Filipina aspiring to be an environmental scientist. Studying by day, and travelling wherever possible, her insightful updates and thoughtful blogposts are really interesting – especially for expats thinking to enrol in education abroad

After being away from her Canadian home for two years – having lived abroad in South Korea teaching English with the EPIK Program (English Program in Korea) – Samantha is still sharing the lessons she learned and the tips she picked up. With a passionate zeitgeist for life and adoring the possibilities of slowly exploring Asia whilst living in South Korea, she is one to watch.

We’re always on the lookout for more accounts to feature – if you write about living in South Korea on social media, leave us a link in the comments and we’ll take a look!