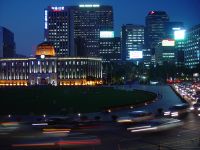 Upon the late 2011 death of North Korean despot Kim Jong-Il, and the ascendancy of his son Kim Jong-Eun to the leadership of the so-called “hermit kingdom”, commentators throughout the free world began to speak hopefully of the possible reforms and fresh outlook that the “Great Successor” (and world’s youngest head of state) might bring to that unhappy land. Early signs indicated that the newest member of the Kim dynasty would have a friendlier view towards the West: he was allegedly educated in Switzerland, had a passion for such non-despotic activities as playing basketball (even inviting former Chicago Bulls star Dennis Rodman to the country in recent weeks), and broke with state broadcasting conventions by allowing Disney characters to be shown on national television.

Unfortunately, it was the more skeptical observers, who warned that the boy-king’s deceptively goofy and naïve public image did not herald any real change for the country, who would be proven right. Beginning in March of this year, Kim almost casually declared a “state of war” with South Korea (though any major troop movements have yet to be seen), and renewed his forefathers’ threats to turn the United States into a sea of fire.Perhaps more seriously, Kim also terminated the only instance of cross-border collaboration between North and South Korea by banning South Korean workers from the Kaesong industrial complex.

However, not long after this series of events, the U.S. leadership seemed to call Kim’s bluff, recognizing in his actions a classic Kim Dynasty strategy of threatening immanent war in order to secure material and financial aid. An unintended consequence of the Boston marathon bombings was that their timing forced the U.S. administration to focus on here-and-now terrorist threats, and to conveniently ignore the bluster from Pyongyang. It is understandable, though, if the citizens of Seoul continue to see Kim’s threats as gravely earnest: the metropolitan area of 24 million residents is well within firing range of North Korean artillery batteries, and not that far from the world’s most heavily militarized border.

The complexities of the Western-ROK alliance

For expats considering relocation to Seoul or elsewhere in South Korea, it is very illuminating, and highly recommended, to read a couple of well-researched books on the North Korean situation: not because it provides more graphic detail of how the North views the West, but rather for a broader understanding of how the South views the West. Many foreign observers have pointed out that the national pride of South Korean citizens is every bit as strong as what the North Korean state media projects, even if it is less openly hostile to the rest of the world. For example, B.R. Myers, in his book The Cleanest Race, points to the fact that South Koreans “celebrate their liberation from Japan every year with nary a mention of their liberators.” He adds that, even though “Korean nationalists do not seriously believe they were never aided by foreigners”, they are still likely to think that “because that aid was motivated by self-interest, it is not historically meaningful, nor does it warrant grateful acknowledgement.”

Realizations like this may be a tough pill to swallow. Yet they suggest that friendships and business partnerships with the locals in Seoul should be based on something other than the long-standing defense collaborations with South Korea and other Western nations. Even now, with the threats from the North reaching a fever pitch again, it is not a great idea to even jokingly suggest that the armed collaboration between the ROK and Western allies is something that should earn you more respect or better treatment from your hosts.

So the present North Korean standoff shows how complicated even a supposedly clear-cut incident can be for Western-ROK relations. Perhaps the biggest news story to come out of the Korean peninsula before this latest scare – last year’s unexpected success of goofy “Gangnam Style” entertainer Psy – is just as indicative of the difficulties that Westerners (particularly U.S. nationals) face when trying to forge lasting bonds with South Koreans: even the apparently innocent hit-meister had a checkered past replete with anti-American protests and song lyrics.

North Korea: not the only regional rival

Expats in Seoul should certainly do all they can to keep updated on the situation with North Korea, but should also keep in mind that this is not the only sensitive spot where South Korean pride is concerned: a resurgent nationalistic sentiment in nearby Japan, for example, is fueling a distrust of that nation in an ROK that effectively banned all Japanese cultural media until the 1990s. Coupled with the situation in North Korea, Japanese prime minister Shinzo Abe’s wish to convert the Japanese jieitai [Self-Defense Forces] into a proper army has been a trigger for much anxiety in South Korea, as has Osaka mayor Touru Hashimoto’s suggestion that the hotly contested Liancourt Rocks be jointly controlled by South Korea and Japan (strangely enough, North Korea sides with South Korea on this one issue).

Expatriates who either hail from Japan, or have a long history of doing business there, should be prepared as always to hear some passionately intense monologues from the locals about the historical wrongs of that country. Ideally, though, they should learn the skill of artfully changing the subject or gracefully refusing to offer opinions on the tense relations between these two rivals. Yes, this applies even during the group bonding / drinking sessions with your co-workers in which normal rules of etiquette can usually be abandoned.