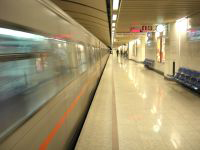 Most new expats arriving in South Korea will do so via Incheon International, a sprawling complex of futuristic terminals and expansive runways. Incheon International is about as technologically advanced as an airport can get, a theme repeated across the country from classrooms to supermarkets.

When this modern, user-friendly Korea is an expat’s first introduction to the country, it’s easy to believe everything else will be a snap. Signs are posted in a variety of languages, everyone speaks English, both Dunkin Donuts and a Baskin Robbins are right at hand and even the train system is a breeze. Newly minted expats depart from the airport feeling generally confident. It’s only when they’re on the ground, forced to make life work in a new land and language that things get a little more interesting.Reality sinks in…

As a new expat, I was lucky. I went straight from Incheon International to a two-week teaching orientation. For the first several weeks I was fed, watered, educated and carted about. My only concerns were making friends and keeping up. The day I was finally deposited at my apartment was the first I was truly forced to fend for myself. That’s when the integration process really began.

Integration didn’t take a few weeks or even a few months. After more than two years I still had a long way to go. Ask someone who has been in the country for a decade and they’ll tell you the same. Foreigners in Korea are forever considered as such. Even if you marry a Korean, speak the language beautifully and can whip up a plate of bulgogi that rivals your 90-year-old Korean mother-in-law’s, you will remain a foreigner.

Koreans are also taught they come from “pure, homogenous” stock. Granted, this message is intended to help keep citizens committed to reunification, but it has also served to create a slightly divisive “us and them” mindset, at least from a foreigner perspective.
Additionally, as a result of their numerous hardships and hard-won accomplishments, South Koreans are a proud people. They have endured more than their share of pain and adversity, having been invaded and colonized countless times. Outside forces have tried time and again to strip this peninsula of its traditions, customs, beliefs and sense of national identity – but it hasn’t worked. Rather, it’s created a fierce sense of loyalty and patriotism, and perhaps has left older citizens with a lingering distrust of foreigners.

However, during my time in Korea I had a largely positive integration experience. I mastered the transportation system, learned enough Korean to meet my needs, made plenty of friends (both expat and Korean), saw nearly every corner of the country and sampled countless local delicacies. I came nowhere near feeling like a true member of the greater Korean community, but was genuinely happy. Many things, like deciphering the two number systems and discovering all the best karaoke rooms, were a snap. As time went on though, I found more and more things I couldn’t so easily do (like find expat-sized jeans) – and couldn’t so easily swallow.

From personal experience, ease of social integration in South Korea varies greatly between individuals. Indicators like age, gender, sexual orientation/identity, appearance, education and language ability all play a key role in finding community and social success. Prior experience living abroad and genuine interest in Asian cultures will of course play a big role. However, it’s impossible to leave race and ethnicity off the list.

Though visitors may be greeted at Incheon International by an impressively multicultural crowd, this is not representative of much of the country. As foreigner populations are concentrated in large cities, most native Koreans have little meaningful exposure to non-Koreans – which allows racial misconceptions and fears to persist.

During my tenure in Korea, I saw racism in the classroom, on the street and in the media. Though these observances do not by any means define my time in the country, which was truly wonderful, seeing comedians dressed in black face and native Kenyans referred to as “primitive” in big budget advertisements was troubling.

Korea from a different angle

However, Korea is indeed changing and evolving toward greater acceptance and equality. With each new generation comes a greater opportunity for families and individuals of all cultural backgrounds to find a welcoming, comfortable home in the ROK.

Aside from these, most Korean expats encounter the same issues expats anywhere will experience: homesickness, isolation, culture shock and frustration. However, when I asked expat friends, both recent additions and long-time residents, they didn’t want to focus on the negatives. The frustrations and difficulties did work their way into the conversation, but many people preferred to talk about the joys of Korean life.

They talked about their love of the food, the people, the culture, the temples, the language and the friends they’d made. They talked about how comfortable life was, and how they enjoyed a standard of living difficult to find in their home countries. They talked about the sense of adventure expat life provided. They agreed social integration was a challenge, but one to be met head on. They agreed Korea has far to go in terms of wider cultural acceptance, but that progress is happening. Mostly, they agreed they would miss Korea.

Regardless of the various trials and tribulations of social integration, I, too, have become fiercely loyal to that tiny country around the world. I might not have felt I belonged while I was in Korea, but I am quick to defend it and love talking about my time there. I maintain connections and friendships in Korea. I keep my pantry stocked with kimchi and doenjang. I love it when people notice the colorful Korean socks I regularly sport. Like the fellow expats I spoke with, I generally only want to tell people about the goodness of Korea and its people. I am critical of it because I grew to truly love it, and when you love something you always want to see it at its best.

I love Korea. I loved my time in Korea. I have nothing but hope for its future and can’t wait to see it at its best.