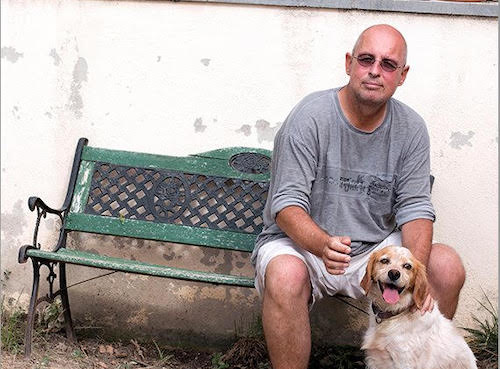 My name’s Brett Hetherington and I’m a European (Australian/British) journalist, teacher and author (most recently of Slow Travels in Unsung Spain) living in Catalonia, Spain with my partner/wife Paula and our teenage son Hugo.

Our first move was to Japan in 1999 (where Hugo was born) and three years later we moved to England.After two years there we moved to live in inland Catalonia in the Barcelona region and have been there since 2006.

Plenty! Languages were a big one because we all had to deal with Catalan as well as Spanish. Hugo was only five when we came, so he picked it up quickly with the help of some great teachers at his Catalan primary school. I’ve become functionally fluent in Spanish and generally understand Catalan okay, though I don’t speak it.

Luckily, a teacher my wife was replacing was leaving his apartment in the town where we wanted to live, Vilafranca del Penedes. I communicated directly with the landlord (in a mixture of his poor English and my even worse Spanish). Later, we bought our own place in a small nearby town, almost a decade ago now.

Very few here, but 20 minutes away on the coast around Sitges (where we used to work) there is a strong expat community.

Friendly, and some acquainatiances, but few real friends, I would say. Most small-town, rural Catalan people call themselves “closed.” They mean that they’re not open to having many new social relationships outside their already established ones.

The vineyards and open spaces of nature around. It’s a great balance too when you mainly work in the big city of Barcelona.

Well, I think of myself as an immigrant more than an expat because I don’t see who we are as any different to others who came here from somewhere else for a better life. I do intensely dislike the bureaucracy and arbitary kinds of decision-making in Southern Europe. The low salaries that never rise are making life harder every year too.

This has been our home for a long time now, but if I compare it with where I lived most of my life, I’d say I miss the more spontaneous way people socialise and talk to strangers, as well as the multi-cultural population being a part of the mainstream.

The food is wonderful: seasonal, fresh, still not too expensive in general. It’s a big reason to live here. The range of vegetables is always limited to Mediterranean ones though, unless you want to pay big money for “ethnic” ingredients.

That’s the only downside, because the seafood and usual high quality in well-priced “menus del dia” is great. There’s fantastic, cheap wine in this area too.

Do it! But be prepared to live in a low-wage economy unless you are very lucky. On the other hand, Spain/Catalonia is a great place to bring up kids, in my opinion.

Stay until we can’t afford it anymore and if Brexit doesn’t make life impossible or any more costly.

You can find Brett's book, Slow Travels in Unsung Spain, on Amazon.