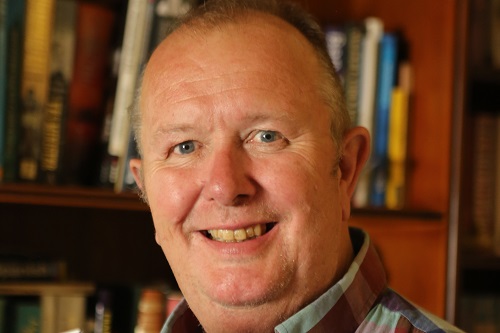 Hi, my name is Dave Proctor. During my working life, I worked as an accountant (boring), policeman (mainly CID), legal advisor (I hated this job), wine buyer/sales (hic) and then, lastly, as a sports photographer.

Since moving to Spain, I have taken up writing, and to my absolute surprise, I have had a modicum of success, including having my first book The Reluctant Allotmenteer published.

I have also written approximately 15 plays, which are published through a theatrical script agent, and am actively involved in the local Amdram scene.

You can have a look at my website: www.spanisheye.es.

In 2014, I was diagnosed with cancer, and after the full round of chemotherapy, radiotherapy and an operation, I was left in a position where I could not physically continue with my work as a photographer.

We re-appraised our life and decided to investigate moving abroad. We moved to the Valencia region in November 2016.

At the time (pre-Brexit), that was the relatively easy bit.

Initially, we spent hours and hours looking online. Weeks were spent staring at the properties on Kyero, Streetview, etc. During the run up, I do not think we watched television. We decided on the La Safor region. We visited the area and fell in love with it.

We then returned for a week’s holiday and, after an exhausting week of house-hunting, we put in an offer on our current house (which was literally the last one we saw, with an agent, before we were due to fly back to the UK).

Funnily enough, we had not seen this house on Kyero and it was not on our list, but as soon as we entered the village and saw the house, we instinctively knew this was the one for us.

We live in a small village and, whilst there are a few expats locally, there is no community as such. The nearest city, Gandia, does not have many expats living there and is mainly overlooked by the British tourist market.

Initially, the locals were somewhat reserved, but over the four and a half years we have lived here, we have made numerous friends in the village, though some of them are not locals. So, we now have Spanish, Argentinian, Venezuelan, Puerto Rican, Italian and Canadian friends.

A little anecdote to show how the locals are. When we first moved in, the old man across the road, Juan, would not even acknowledge us. We persisted with saying ‘hola’ to him. After a year or so, we got our first wave back, even though it was almost as if he were embarrassed. Then, after a couple of years, one day there was a knock at the door, and there was Juan with a great big carrier bag full of fruit for us. We have been friends ever since.

It really is an idyllic existence. We are in a valley surrounded by orange groves and mountains but can be on the beach within 10 minutes. The village really does have every facility you could imagine. It has a population of under 450 people, and yet we have a concert hall, music school, all the essential shops and services, and a municipal swimming pool. The local people are friendly and welcoming, the food is generally fresh and of high quality, and the cost of living has enabled us to enjoy life without worrying.

Nothing whatsoever. We love it here.

The lifestyle in Spain is far more relaxed, which to a Brit came as a bit of a shock when we first got here.

This was emphasised when we first visited our accountant/gestor. We were ten minutes late, as we had trouble finding a parking place. We, of course, apologised for being late, to which Pablo replied, ‘You are in Spain now; we are always late.’

The Spanish really do make time for their families and friends and have a far more tolerant attitude, together with an incredible joie de vivre.

I should also mention lunch. It came as a pleasant shock that you can get a decent lunch for under €10 and that that meal could take anywhere up to four or five hours.

The housing market is completely different here, and sometimes what can seem to be an idyllic property can turn into a nightmare.

An anecdote about this is some friends bought a place on a hillside urbanisation. It is a quiet development with large villas but no facilities. The female friend did not drive and soon was bored silly. After a short time, she returned back to the UK, leaving her partner.

I also know of people who have bought properties near the beaches, only to realise that the seaside areas are virtually ghost towns out of the main holiday seasons.

I would advise anyone to rent a property for the first few months (there are even rent-to-buy properties available) to really determine what you want from a property.

I would also encourage anyone who wants to really enjoy this country to try to learn Spanish. Whilst this may not be essential, I find it really helps and enables you to integrate with the locals.

We do not have any grand plans for the future. We are extremely happy here.

I am happy writing, and my wife has taken up art. We have our dogs, our friends and a great lifestyle.

Why plan for anything else?