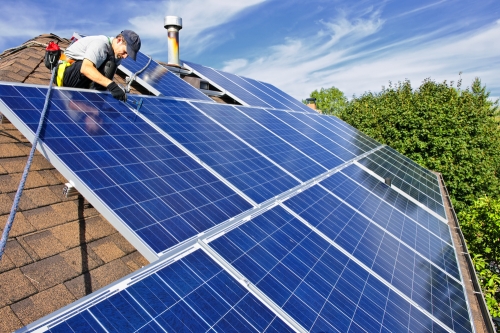 Following the Spanish government’s move a couple of years ago to crack down on households generating their own solar power, switching to the renewable energy has generally been seen as not being viable for the average individual.The infamous royal decree 900/2015, which came into effect in October 2015, effectively raised the costs of running your own solar setup. The new law laid out two types of charges for grid-connected solar-power users: the first is a fixed charge for the amount of contracted power from the electricity distribution company, since such users are still connected to the conventional grid. The second is a variable charge that is based on how much solar electricity you generate, commonly and pejoratively dubbed the ‘sun tax’. On top of this, you’ll have to pay for whatever electricity you draw from the conventional grid.

This essentially means that as a solar user, you have to pay for all the electricity you use, no matter whether it comes from a power utility such as Endesa or from your own solar system, which you have paid for and set up in your home. Naturally, the legislation drew a lot of severe backlash from homeowners in Spain, but for now, it still stands.

One of the basic ideas behind installing solar panels, batteries and so on is that you can, over time, recoup the initial costs by saving money on electricity since you don’t pay for what you generate, only what you pull from the grid. Since the Spanish law imposes additional charges on what you generate, it seems at first glance that home solar systems are an unwise investment most in the country. However, it’s not quite that simple.

Different types of consumers are affected in different ways. Under the ‘sun tax’ law, there are two types of solar-power users, who we’ll call Type 1 and Type 2.

Type 1: Consumers with installed solar power generation capacity of up to 100 kW. The government refers to this type of use as ‘self-consumption’.

Type 2: Consumers with installed solar capacity of over 100 kW and who are registered as power producers. The government refers to this type of use as ‘self-consumption with production’.

If either Type 1 and Type 2 users generate more power than they need at any point, the surplus will be siphoned off into the grid. However, while Type 1 users are not paid anything for this surplus electricity, Type 2 users are. In many places, such as some US states, the concept of ‘net metering’ ensures that solar-power users get paid for the surplus energy they give to the grid by adjusting the cost of that against their electricity bill. In Spain, such an option is practically non-existent, since firstly, only households with more than 100 kW – a rather large capacity for home usage – can sell power to the grid, and secondly, those who can (Type 2 users) have to register as a power production business, which involves added costs and charges.

So far, the outlook for solar power in Spain at the individual level looks pretty bleak. But there are some exceptions to the rules.

For instance, grid connected users with installed solar capacity of 10 kW or less are exempt from paying the variable charges on their generation (the ‘sun tax’), although they do have to pay for the contracted power from the utility. Also, users in the Canary Islands, Ceuta, Melilla, Ibiza and Formentera are exempt from the variable charges too, while users in Mallorca and Menorca get a 50 percent exemption.

Of course, if you decide to go completely off-grid, then you don’t have to pay for either contracted power – since you will have none – or the solar power you generate, no matter how much it is.

The question then is, is solar power a viable option for you, as an expat in Spain?

If you need an installation of more than 10 kW, then it’s not really feasible. However, ask yourself if you really need more than 10 kW of solar capacity. According to a study from 2011, the average Spanish household’s annual power consumption is about 10,500 kWh. And Endesa, who offer solar installations, cite an example of a home in Malaga with a consumption of a little over 11,000 kWh. 10,000 kWh to 12,000 kWh a year is therefore a reasonable estimate to make for many homes.

A brief note on the units used here: Watts and kilowatts (kW) are used to refer to the generating capacity of the solar system, or the maximum power that will be delivered to your house based on your contract with the power utility. Watt-hours or kilowatt-hours (kWh) represent the energy used or generated over time. So, if you have a power plant that has the capacity to generate, say, 1,000 kW, and you run it for an hour, you will have generated 1,000 kWh.

If your annual consumption is 11,000 kWh, that translates to about 30 kWh a day. If we assume that you get enough sunlight to run your solar system at full generation capacity for six hours a day on average, you need a setup of about 5 kW to meet your electricity needs. The reality of planning and managing a home solar system is more complicated than that, but it’s a good place to start. We’ll come back to the details later.

For the average home then, 10 kW or less should be plenty. This would mean you don’t have to pay the variable ‘sun tax’ charges. This also applies to those who happen to need more than 10 kW but live in regions not on the mainland, such as the Canary Islands.

Another option is to go off the grid entirely. This means that you don’t have a power line from a utility to fall back on when your solar panels can’t generate enough electricity to keep your home running, such as at night, or during a particularly cloudy day. The solution, as you may already know, is to install capacity greater than what you need during the day and store the surplus by charging a bank of batteries. This stored power can then be used at night, or whenever there’s a shortfall. Off-grid consumers often also have a back-up electricity generator which is powered by diesel or some other fuel for emergencies.

To Solar Or Not To Solar?

On the whole, there’s no definitive answer to the question of whether solar power will work for you or not. You will have to take stock of the advantages, the costs and constraints and decide whether, given your particular situation, solar is the way to go.

To help you with your decision, we’re going to lay out what exactly you need to take into account for your calculations.

Next, you have to check whether you have the space to set up a home solar system. Naturally, if you’re living in an apartment building in Barcelona, putting up rooftop solar panels is not really an option! However, if you live in an individual house of your own, or if you rent and your landlord is amenable to you installing panels on the roof or in the garden, it should be more possible to go ahead. Measure out the useable space on your roof, or in your garden or yard, and make a note of it.

You will then need to figure out what sort of solar-power generating capacity you need to install. Look at your annual power consumption, divide it by 365 to get your average daily use, and divide that number by the number of expected sunlight hours. Here’s where your consumption pattern analysis bears fruit.

You will also have to figure out how much sunlight you actually get. This means factoring in how many hours of direct sunlight hit your roof (or wherever you plan to install solar panels) every day on average, and how this varies from season to season. The direction your panels face also matters – commercial solar farms often have mechanisms in place to automatically tilt the panels to follow the sun’s path. Unfortunately, this isn’t feasible for home use, so you’ll have to make do with what you’ve got. A south-facing roof is best, but SunCalc is a useful tool if you want to get an idea of the sun’s trajectory in your area.

The capacity you need will dictate how many solar panels you have to get. A common size is 1.7m by 1m for 250 W panels, though these can vary widely. You will have to check if the amount of useable space you have, whether you are planning a roof-mounted or a ground-mounted system, will be enough to handle the number of panels you need. Also, avoid underestimating your capacity needs, as it can be rather cumbersome to upgrade a system after it’s been installed.

The next step is to determine and compare the costs involved. You should already have records of your current power usage and electricity bills as a baseline. Moving to solar power means you will incur a one-time set up cost. You will need to pay for panels, installation, cabling, support structures and so on. There are also variable costs over time to consider, which include the fixed charge you pay for the power contracted from a utility (unless you decide to go off-grid), electricity usage charges for power you draw to supplement your solar system and maintenance costs for the solar installation.

In some municipalities and regions in Spain, switching solar power entitles you to a discount on the property tax (Impuesto sobre Bienes Inmuebles, or IBI) for three years following the installation, which can help offset some of the costs.

The main expense will be in the form of solar panels, support structures and wiring or cabling. If you plan to have a battery bank, that will be an additional expense, and you will need to obtain an inverter too. The cost of panels will vary based on their generating capacity and the quality of the silicon used. There are two common types of solar panels available: monocrystalline and polycrystalline. Monocrystalline panels are made using silicon of higher purity and are more efficient at converting sunlight into electricity, plus they also wear out less over time. Polycrystalline panels, on the other hand, are cheaper.

While choosing the panels, check for the efficiency rating, as well as the warranty period and expected lifetime. Don’t forget to ask what how the efficiency will vary over time as the panels wear out.

You can get a consolidated quote from a solar power installation company. Needless to say, you should shop around and contact as many service providers as possible to get a good deal. Solar Sky is one such provider, and as previously mentioned, Endesa also now offers home solar installations. The company will generally offer to survey your home and submit a plan tailored to your requirements.

Ultimately, it all boils down to whether you can recoup your initial investment through savings on the power bill or not. After all your calculations, if you think you can break even over the long term, say seven to ten years, and then start actually saving money, then by all means, make the switch to solar. For what it’s worth, Endesa’s solar power website claims savings of nearly €20,000 over 25 years for a hypothetical household consuming 11,116 kWh a year.

And of course, as well as the fiscal considerations, you can rest easy knowing you’re doing your bit for the environment too.