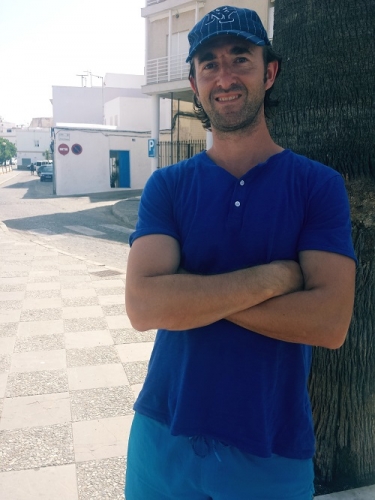 Barry, you're a British expat currently living in Spain. Tell us a bit about yourself and what prompted you to move abroad.

The main reason I came to Seville was to pick up Spanish, learn the guitar, and continue my teaching English career. I got a whole lot more than that though. I quickly met a Spanish lady (who was my student, she was 21 and I was 25) and she pinned me down and made me stay here. I tried to escape several times, but I guess love won in the end. We are married now with two kids. I speak pretty good Spanish, still teach English, but I realised that I just wasn’t cut out for the guitar.What were some of the things that surprised you when you first moved abroad?

I guess the unbearable heat was like nothing I’d ever experienced. I lived in Bangkok for a while, and that wasn’t too bad, but the scorching sun in August here was suffocating.

I was also surprised by the eating patterns. Spaniards prefer a larger, longer lunch and a quick, lighter dinner, which they tend to eat late, anything from 8.30pm to 11.00pm. At first I couldn’t adjust to these alien ways. I used to have breakfast at 7am, lunch at 12pm, dinner about 4pm, and then eat nothing until the next morning. I was a bit daft though, and soon realised there was nothing wrong with eating later, especially as it doesn’t tend to be a massive meal.

My biggest shock was probably the influence of religion here. When I arrived I wasn’t Catholic, but my wife’s family were quite religious. I grew fond of their main festival Semana Santa, and became fascinated by it. After I proposed to my wife, I realised that if I actually wanted marry her it would have to be in a church, in which case I’d have to become Catholic. So I did a crash catechesis course and we were married within the year. That also meant I could participate in Semana Santa as well, which has been a real eye opener.

You've written recently about raising bilingual children – what are some of the challenges you've faced in this area?

It’s getting harder the older my kids get to be honest. At the start, before they started nursery and school it was easy, but as they live in a mainly Spanish environment they naturally speak Spanish over English.

My wife’s level is quite good, but she feels weird speaking English with them, but we are trying to incorporate it more at home (I am bribing her now). The TV is always on in English and we listen to a lot of music, but still my son is advancing way more in Spanish than English. I try to be patient with him and pretend I don’t understand him when he speaks in Spanish, which normally forces him to speak in English. I’m trying to avoid the ‘teacher’ approach of constant banging on about English as I just don’t want that environment at home, but as they grow older I’m not sure how I’m going to handle it. It’s something I’d like to read more about though. Any advice would be welcome.

How do the children react when they go back to the UK for visits? Do they view Spain or the UK as home?

They know that Spain is home, but my son does ask a lot about his Nanny and Granddad and also his cousins, but he also asks a lot about crocodiles and dinosaurs now. He knows that we need to get a plane to go to England, but doesn’t realise that you can’t just hop on one when you feel like it.

They love being in England. My parents’ house is like a giant toy store, so they turn into hypo kids and love playing with their cousins, as their ones here are much older. My daughter is only just coming up to 2, so she’s still not sure what’s going on. But after our last flight with her, where she screamed the plane down, I’m just glad that next time she’ll have her own seat.

What do you think could be done by people outside the family – for example schools, playgroups, and so on – that could help with teaching children multiple languages?

The level of English in Spain is definitely improving. These days I guess most people have a B1 (intermediate) level, and it’s creeping towards the B2 end. The level of English at school is quite bad though. The main problem is that the teachers don’t seem to do speaking activities with the students. It is hard with 30 kids in a class, so I can see why, but that’s the main reason a lot of Spanish kids have to go to language academies to improve their level.

I think the government should start with getting rid of dubbed Spanish films. In Portugal the films are in original version and their pronunciation and level of listening is much better. That would be a hard battle with the public though, especially the older generation.

A lot of playgroups and nurseries do have a bilingual aspect. Luckily the one our children go to has a native English teacher. The real answer would be to hire more native English speakers for the public schools. There’s only one Spanish guy I know, a friend of mine, who has perfect English pronunciation. The system is so complicated to get in a lot of teachers don’t bother though. I know I won’t.

Schooling is a huge consideration for many expats – how did you decide where to send your children to school?

We used to live in the centre of Seville, and just had to get out because of the noise, plus we couldn’t deal with living in a flat anymore. Now we live about 10k from the centre, and it’s easy to go back in on metro.

The schooling system is not much different from back home really. There is a catchment area around the school, you apply for 3 schools in March to start in September and if you’re lucky you get your first choice.

Where we live there are about 4 schools and we just chose the one we felt more comfortable with. The Head seemed like a decent bloke and we knew people in the area who had also sent their kids there. We were lucky getting him in as we didn’t have a whole load of points and there were just enough kids for number of places. Our daughter will get in automatically because our son is there. We are generally happy with the school. There are no other bilingual kids though, so I don’t know how that will affect them in later life.

Do you have any advice for people who want to move abroad with their families?

Definitely learn the language. This is the first battle. Your kids will pick it up at school over time, but if you want to survive through the day to day business of speaking with teachers, buying a property, and becoming accepted in the local environment, then you really need to get your level up.

Depending on your profession, I’d choose one of the bigger cities as there will be more work, but they will be more expensive. I chose Seville because it’s not far from the beach, has plenty of work opportunities and the weather is great, apart from the intense July and August months.

I was lucky in that my kids were born here, so they are accepted (even though you can tell from the way they look that they are half-British), but I’m not sure what it’s like for families coming over. Spain is becoming more and more cosmopolitan though and Spaniards are generally happy to welcome people, as long as you make an effort with their language and customs, and don’t steal their beautiful women, like I did!

Barry O'Leary has been an expat in Seville for nearly 10 years and when he's not teaching English, he blogs at A Novel Spain. His non-fiction travel literature book, Teaching English in a Foreign Land, sold over 2,500 copies.