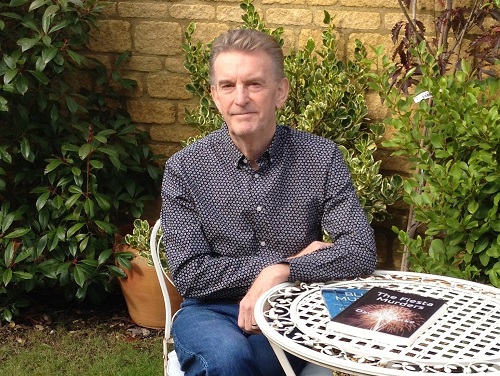 The Fiesta Murders is the latest novel by British author David E Burke.

It’s the second book in his popular Menorca detective series about an English detective who retires to the Spanish island of Menorca for a quiet life in the sun, only to be pressed back into service to solve a series of baffling murders. Like David’s first novel, Blue Murder, The Fiesta Murders is full of plot twists and turns, action, and fun. It also has a thrilling conclusion.

But where does the author get his ideas and inspiration for his expat sleuth’s island adventures?

David, who lived on Menorca and who still runs the travel guide in2menorca with his wife, says, ”There’s no doubt I draw on my own experiences as an expat for my hero Frank Harmer’s many misadventures. For instance, in The Fiesta Murders, when Frank finds a live Scorpion in the logs he has had delivered. That happened to me! I too was terrified, but unlike in my novel, next door’s cat did not come to the rescue.

“Although I did get the idea from seeing a cat catch and eat a live Scorpion behind a Menorcan bar. I thought I must have had one too many Sangrias that day!

“Then there’s the typical expat learning curve and the mistakes we all make on the journey – such as getting the language wrong, like the time I asked for some ‘Burro’ on my bread, much to the amusement of the waiter. Frank, although he is a brilliant detective, is always doing stuff like that. Or using English idioms that are not understood – like when he asks Inspector Juan what is driving him around the bend, and the confused the policeman answers, ‘My car!’

“Yes, there were many such incidences that helped me to flesh out the characters – some of them are even based on real people I’ve met (but don’t tell them that). As for the plots, well, they are pure invention. Menorca isn’t awash with crime, dead bodies and crazed killers. That’s where the imagination and writing skills come in.

“One of the many aspects I love about Menorca are the annual fiestas. Everyone goes, and the islanders have a great time. They are such colourful and lively affairs and have some very unusual features and unique events, which I thought would make an excellent setting for my new novel.

“The atmosphere is so rich that you feel anything can happen. It’s visually powerful too, and that inspired me greatly.

“In my new novel, someone is using the fiestas to commit a series of bizarre and brutal murders. Leaving hidden messages at the scene of each crime that give clues as to his motive and identity, he despatches his victims using a variety of innovative methods and ironic touches.

“Police consultant Frank and DI Juan Diego Rodriguez once again join forces in a race to find out the answers before the killer can strike again. But Frank senses there is something else going on here. It’s almost as if the killer is using the playbook from several well-known Hollywood serial killer movies to taunt or mislead the police.

“It all ends with a shocking twist and an exciting finale.”

He says, “I don’t think Frank Harmer is ready to relax in the sun just yet. I’m sure that there will be a few more baffling cases for the expat detective to solve.”

You can preview and order copies of The Fiesta Murders and Blue Murder on Amazon.

David E Burke BIO: Born in Wales, David E Burke is an accomplished writer who lives with his wife in the English Cotswolds. After a long career as an advertising copywriter, he decided to turn his hand to writing novels. The island of Menorca, where they lived and established the in2menorca magazine and guide, became the inspiration for his Menorca detective series. David and his wife still like travelling, and they visit Menorca as often as they can.