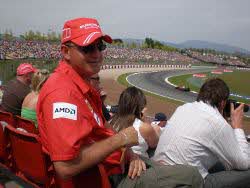 Justin is the owner of the popular expat website Eye on Spain.

Expat Focus: Justin, can you tell us a bit about your background and how Eye on Spain came into being?

Justin Aldridge: I was born and raised in Gibraltar and after completing my A-Levels at 18 I went on to do a Masters degree in Mechanical Engineering at Liverpool University. After university I worked within the automotive industry, including a stint with a Formula One team, working in design, production and finally in a commercial role. The Automotive industry was, and still is, struggling in the UK and with the collapse of companies such as MG Rover, it made a big impact on the company that I was working for and they decided to shut the plant down, effectively making me redundant. I was only 28 and my partner Susan had just given birth to our twin daughters.

The redundancy gave us a little bit of money to do something different, so we decided to try a new life in Spain. We came up with the idea of Eye on Spain through our own need. Back in 2004 we were buying a property off-plan and still being in England we kept wondering if they were actually building it. So I asked a friend of mine who lived in Marbella to go and take some photos for me. He’d later email us the photos and it was very exciting to see the progress (or sometimes lack of it) being made.At this point we thought that there must be so many more people in this same position, wondering what’s going on with their development. That’s how Eye on Spain was born, so that off-plan buyers could share progress information and photos on the website. Today it has grown in many ways and people continue to use the forums and photo sharing facilities for their completed communities in Spain.

Expat Focus: What does a typical day running the site involve?

Justin Aldridge: We worked incredibly hard at first to get the site established with the search engines and with the visitors. Those were 80 hour weeks, during a time when our twins were going through the “terrible twos”. They were tough times.

Today the site is quite hands-off really. I don’t get too involved in discussions on there and only intervene if things get nasty, which they can sometimes, and people ask me to sort it out.

Monday is my busiest day. I prepare the weekly newsletter which goes out on a Tuesday. It does take a bit of time sifting through the different articles that are sent to us every week. I always try and include a good balance of articles for each newsletter.

The rest of the week is much easier and is more part-time than full-time. I answer advertising enquiries when they come in, spend a bit of time networking socially online and do some planning. Every now and then I’ll create a new section or module for the site and I tend to work solidly on it for a week or two…then take it easy again.

Expat Focus: What were the main challenges you faced when you first moved to Spain? How did you overcome them?

Justin Aldridge: We had many challenges in the early days with the biggest one being the rate at which our small pot of money was vanishing.

We thought we had enough money to last us 12 months, but in reality it was more like 4 months. There were just so many unforeseen costs.

To top it all off we’d rented a house in a very bad location where we couldn’t even get a phone line! It was very difficult to run an Internet business without an Internet connection. I did what I could working form a smokey cyber cafe down the road but they didn’t seem to open very regularly. It was very tough and we did contemplate returning to the UK.

But we couldn’t as we didn’t have enough money to return!

We also couldn’t get our kids into the local nursery as it was full. We ended up sending them to a private one half an hour away, an additional cost that we could ill afford.

The website wasn’t making any money at this stage but I managed to get a contract to build a couple of websites for people which brought in a few Euros. We also moved from Manilva to Marbella (it was actually cheaper there!) and we managed to get a phone line with ADSL! That’s when we were really able to get the business going. But that first year particularly took everything out of us. We’d really regretted leaving our simple life in the UK.

Expat Focus: If you had to give one piece of advice to someone considering a move to Spain, what would it be?

Justin Aldridge: If you need to earn a living here, whatever you budget for the first year…double it! Moving to another country is not cheap and there will be many things that hit you unexpectedly and most of them will cost you. You need to make sure you come over with plenty of money, more so today as things are much tougher in Spain now and the cost of living has gone up. Plan well and plan for the unexpected.

Expat Focus: What does the future hold for yourself and Eye on Spain?

Justin Aldridge: I don’t like to look ahead more than one year as things change so quickly. This year I have some final updates and changes I want to make to the site. Thereafter maybe it’s time someone else took over! Still being an Engineer at heart I am always looking for new ideas and I have a few I want to explore further. Maybe this is the year that that will happen. I have learned a lot over the past 6 years running my own business and I would like to employ those new skills into a new venture. Watch this space.

Expat Focus: What do you do to relax when you're not working?

Justin Aldridge: I love spending time with my kids. They are seven now and we have a lot of fun together. I like to do things with them, teach them new things and for them to experience the sort of things I never could as a child as my family was very poor. I took them skiing recently, we went to see the Formula 1 testing in Jerez the other day and Susan and I took them on a tour of five countries in eight days in December. They loved it!

My passion is Formula 1 and I go to the gym three times a week. If I’m not working I’m at the gym, I’m with the kids or reading a book. We don’t watch much TV, there are so many more things to do than sit watching the box. I’d never have made a success of Eye on Spain if I’d spent my free time watching TV.