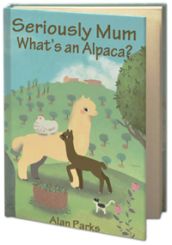 Expat Focus talks to Alan Parks about his memoir "Seriously Mum, What's an Alpaca?" a frank and charming story of a brave couple who risk everything when they move to Spain to breed alpacas.

Alan, please tell us a little about yourself.

My name is Alan Parks, and I originally come from the south coast of the UK, where I used live in a town called Peacehaven, just outside Brighton. I moved, with my partner Lorna to rural Andalucia, Spain, close to the city of Cordoba in 2008 after Lorna became ill with Sarcoidosis.What do you like/dislike about expat life?

We love our life here in Spain. Obviously some things are hard. Lorna has three grand children that have arrived since we moved here, so that is difficult living so far away. I don’t actually like the whole ‘expat’ thing. One of the main criteria when looking for a house was not to be too close to expat hubs as we wanted to immerse ourselves in ‘real’ Spanish life.

You recently published "Seriously Mum, Whats an Alpaca?", what is the book about?

After living here for a few years, and telling all our stories over and over, someone said to me “You should write a book” So that’s what I did. The book is about our move to Spain and our new life here. Obviously there is the added story to our expat story which is the alpacas. In our first couple of years of alpaca ownership, we had a few problems, so I also wanted to help people learn about these animals.

What type of audience do you feel your book would appeal to?

I think my book appeals to quite a wide audience. Expats (especially in Spain) can relate to our experiences. People who own animals also have had similar experiences to us and finally, people who might want to make a dramatic change in their life, seem to enjoy the book.

What inspired you to write about alpacas?

I wrote about alpacas because although there are growing numbers of alpaca owners the world over, there are still lots of people who don’t even know what an alpaca is.

How did you come up with the title?

The title originated from Lorna’s daughter who exclaimed “What’s an Alpaca?” when we told her our plans. It was originally called Bloody Hell, Whats an Alpaca? But I had some problems with websites in the US, so had to change it.

What was the hardest part of writing your book?

I had never written anything before, except for a few blog posts. So I wrote about 50 pages, then gave it to Lorna to read. She liked it, so we sent it out to a few trusted friends for some feedback. They all liked it, so I went ahead and wrote the rest. The hardest thing is trying to write a story that is entertaining to the reader, and not just “We did this, and then we did that!”

What tips do you have for aspiring expat writers?

Have a go! Until you start writing and give it to some people to read you will never know. Don’t keep it shut in a drawer, let the world see it.

Well, at the end of last year I finished the sequel to my book, which I called Seriously Mum, Where’s that Donkey? I am also putting the finishing touches on a book of rescue dog stories called Take Me Home, Por Favor, which will raise money for rescue centres here in Spain. Also, this week, I have released a box set of travel memoirs on Amazon, with two other writers from Spain (Victoria Twead and Joe Cawley) and two from elsewhere (Tony Slater from Australia and Savannah Grace from the Netherlands, both expats).

What book are you reading now?

I don’t have much time for reading at the moment, so I delved back in to The Da Vinci Code last week.

Hopefully later in the year we will have some alpaca babies (called cria), we also hope to move to property more suited to the alpacas, although we need to sell this place first. I may also be able to write and publish book 3 in the Seriously Mum series.

Where can people buy your book?

You can buy "Seriously Mum, What's an Alpaca?” from Amazon in both paperback and for the kindle.

“Seriously Mum, Where’s that Donkey?” is Alan Parks’ follow-up book and continues the story of Alan and Lorna’s induction into Andalucian life and fills in some of the blanks.

If you would be interested in finding out more about Lorna and I, you can find me on Facebook or on Twitter @AlpacaBook You can check out my blog What's an alpaca. We also have people visiting our farm for alpaca days out, BBQs and holidays.

Please do get in touch if you would like more information.