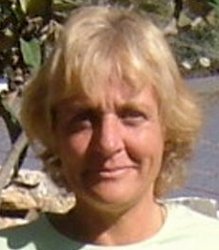 Victoria is one of the forums leaders of our Spain forum and author of the popular book Chickens, Mules and Two Old Fools. In this interview we get to know her a little better!

Expat Focus: Can you tell us a bit about your background before you became an expat?

Victoria Twead: I was born in Dorchester, Dorset, the middle child of three. My father was in the army, so we were posted to Germany where I spent the first five years of my life. I was sent to a German kindergarten and spoke only German. At the age of 5, we returned to Dorset and I was enrolled into a village school. I settled in well and promptly forgot all my German.

All three of us kids were sent to boarding school, which I thoroughly enjoyed. It was like acting out an Enid Blyton book; nature rambles, midnight feasts and adventures. On leaving school, I trained to be a teacher but did many jobs before deciding to teach. I was a hotel housekeeper, welded fireguards in a factory, looked after goats and seabirds in an animal sanctuary and became a housemother in a children’s home. However, all I really wanted to do was write.In 1977, I married and had children. I went back to teaching and taught English at a High School for 12 years. Then I left to start two businesses with my husband; a pine furniture factory and a stencil design business. When the children had grown and left home, my husband and I parted amicably, and I started teaching again. This time I went back as a supply teacher, a plan which was supposed to give me more time to write.

Then I met Joe, and together we flipped houses, buying derelict properties and doing them up. Hard work, but rewarding.

Expat Focus: What prompted you to move abroad?

Victoria Twead: That was entirely my fault. In 2004, Joe wanted to retire quietly, but I had this dream in my head of moving to Spain, doing up a property, and having time to write in a beautiful climate. It took a lot of intensive nagging before Joe finally came round to the idea.

Expat Focus: How did you choose the area to relocate to?

Victoria Twead: I wanted to live as far south as possible (for maximum sunshine), and in a province that was not too expensive, with airports nearby. We’d holidayed in Almería several times, so that was the obvious choice.

Expat Focus: What sort of property did you choose?

Victoria Twead: We chose a tiny village in the Alpujarra mountains, so small that even many local people haven’t heard of it. The house is very old, with the traditional metre thick walls made of mud and rocks. It had no kitchen or working bathroom and we spent four years getting it right. It would have taken longer, but our wonderful Spanish neighbours were always on hand to give us advice or lend us a trailer.

Expat Focus: What are the advantages and disadvantages of living in such a remote location?

– Inland property is much cheaper to buy.
– Council tax is miniscule compared with densely populated areas, or the UK.
– It’s easier to learn Spanish quickly by joining a village community and immersing yourselves in their culture.
– The peace and quiet, perfect for writing.
– The amazing mountain views and plenty of wildlife to watch.

– The half hour trip to buy food or building materials, although we’ve got used to relying on the delivery vans that sell bread, fish, fruit and veg. – No mains drainage and having to rely on our cesspit, although that’s sorted now. – The mountain weather which is unpredictable. Temperatures can change from 30C to minus 8C in a single day (in winter). – The fact that it’s 5 or more degrees colder than the nearest coastal resort. – The winding roads that sometimes become blocked by rockfalls.

Expat Focus: Are you employed?

Victoria Twead: We rely on our pension and the rental income from our UK property, but we are comfortable enough. However, we bought a plot of land in the village and had two houses built. The profit from selling these houses reduced our mortgage considerably. We were lucky; we just beat the Credit Crunch which hit Spain as hard as it hit the UK. I don’t think we’d risk a similar venture again.

Expat Focus: What is your relationship like with the locals?

Victoria Twead: Fabulous. Nobody could have been more welcoming than the villagers. It was a delightful, if rather steep learning curve, and our experiences were often hysterically funny. In such a tiny community you get to know each other very well. In the winter, there are only five permanent residents in the village, including us. Uncle Felix, a retired goatherd who shares his cottage with his beloved mule and two chickens. Ancient Marcia who runs a shop selling sweets, beer and cigarettes and nothing else. Geronimo, a gentle, football-mad kind of village policeman who enjoys his beer perhaps a little too much. And us. As you can imagine, masses of material for my book, ‘Chickens, Mules and Two Old Fools’.

Expat Focus: Has life as an expat brought any surprises?

Victoria Twead: Oh, yes! Nobody warned us that we’d become reluctant chicken farmers and end up owning probably the most dangerous cockerel in Spain. Nobody warned us that we’d knock over the village fountain or be expected to eat cold pigs trotters. Every day brings a new adventure, like the time we helped capture a vulture, had a jellyfish incident, or when poor Joe’s bottom was branded by accident. I’m an incurable list-maker (I used to be nicknamed Schindler in the UK) and kept daily diaries, all of which I drew upon to write the book. It’s quite true what they say; fact is stranger (and funnier) than fiction.

Expat Focus: What advice would you give to anyone following in your footsteps?

Victoria Twead: Pretty much what most people say:

– Learn the language. I’m ashamed we are not more fluent than we are after five and a half years, but we get by.
– Rent before you buy to make sure you’ve chosen the best location.
– Buy a Spanish car, don’t import from the UK. We brought our jeep over and have had endless expensive red-tape problems.
– Be adaptable – things are very different.

Victoria Twead: Now that my first book has been released and is doing rather well, I’d like to write the sequel. Joe wants to write as well, and neither of us can think of a better place to live and write than in our village, here in the mountains of Andalucía.

Expat Focus: Victoria, many thanks for your time and thank you for being a forum leader at Expat Focus!

"Perhaps if Joe and Vicky had known what relocating to a tiny village tucked in the Alpujarra mountains would really be like, they might have hesitated. Life is never dull as they embark on their Five Year Plan. At the end of five years they must decide – will they stay in Spain or return to the relative sanity of England? Vicky and Joe's story is packed with irreverent humour, animals, eccentric characters and sunshine. A truly hilarious page-turner!"