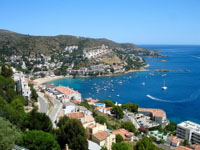 Spain is much more than the big cities of Barcelona, Madrid and Granada. It is also a country of mountain ranges, sandy beaches and forests. And away from the bustling city life and tourists hotspots, lies a quieter part of Spain consisting of little towns and villages that have remained mostly undiscovered. Here are 5 beautiful Spanish destinations that are a good way off the beaten track.

The city of Huesca lies in northeastern Spain in Aragon, and has been largely overlooked by tourists and travellers.Although it still has much of its architectural and historical heritage intact, it is witnessing increasing urbanization. It is among the least populated provincial capitals in the country. The population stood at 52,059 in 2009. Huesca is known for its yearly celebration of the festival of San Lorenzo. San Lorenzo or Saint Lawrence was a Huesca native who died a martyr in 268 AD. The anniversary of this significant event falls on August 10, but the celebrations begin a day before and continue till August 15. It is customary for the locals to dress in clothes of white and green during the celebrations. Zaragoza airport is the nearest airport, while trains from Barcelona and Madrid run to and from Huesca.

A historic town in Cantabria, Santillana del Mar is home to the Altamira caves. These caves located on the outskirts of the town are called the ‘Sistine Chapel of the Paleolithic Age’ because they were the first caves in which pre-historic drawings and rock paintings were discovered. Santillana’s main street, known as calle de Santo Domingo, leads to a historic quarter with cobbled streets and elegant buildings that were constructed between the 14th and 18th centuries. Santillana del Mar is often referred to as the ‘town of three lies’ as it is not a saint (santo) and neither is it flat (llana) nor by the sea (mar). But its name actually comes from Santa Juliana or Santa Illana whose remains lie in a church.

Situated in the province of Jaén, Cazorla had a population of just 7,984 in 2012. The origins of this little city date back to over 2000 years ago when the Romans founded it under the name, Carcacena. Cazorla retains its medieval appearance with stone houses, steep streets and springs. There are even a couple of castles each with a rich history. People usually visit Cazorla on their way to the Natural Park of Sierras de Cazorla, Segura y Las Villas Natural Park. It is an entry point to the park and serves as a base for visitors. Cazorla is known for producing high-quality olive oil and also for its annual fair held in mid-September.

A peaceful and quaint village, Maro is located outside Nerja and mainly known for the Nerja Caves, which can be found on the outskirts. Maro’s population amounts to just 800 inhabitants. A walk through the charming village streets with their ceramic street signs will give you glimpses of the surrounding countryside and also the sea. The whitewashed buildings are characteristic of the architecture of the region. Maro has many small beaches that haven’t yet been discovered. Although the village does not see much tourist activity, it still has some very good restaurants and tapas bars that also offer excellent views of the sea. Maro has an annual festival in October held in honor of the chestnut. Apart from music and dancing, the unique festivities also include consuming many kilos of chestnuts!

Cuenca in Castile-La Mancha is a hilltop town that sits precariously on a narrow rocky ridge that runs between the Huécar and the Júcar rivers. Some of its buildings, called Casas Colgadas or hanging houses, are situated on a tall ridge that is perched right over the Huécar gorge. Cuenca, which was declared a World Heritage site in 1996, has a thriving art scene. In fact, the Casas Colgadas now serve as the Spanish Museum of Abstract Art. The town is also known for its culinary specialties such as Ajo Arriero, made of cod, potato and garlic, and served with bread and Spanish Ribera red wine. Cuenca has a population of about 56,000 residents and is a two-hour drive from Madrid.