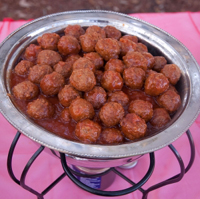 Swedish cuisine is laden with many regional differences. The northern region is known for its meat dishes, while the people of the south consume varieties of fresh vegetables. Traditional Swedish dishes are prepared through simple methods and use a lot of contrasting flavors. Food in Sweden is also inspired by several foreign influences over the years.

The smorgasbord has been a popular Swedish tradition every since the early 18th century. It is a collection of dishes that are supposed to be eaten in a special order on separate plates. Salmon dishes regularly feature in smorgasbords.Marinated herring is another mainstay of Swedish cuisine. Swedes love their sauces and make different varieties ranging from rich creamy sauces to sauces flavored with herbs like parsley and dill. Another popular ingredient in many dishes is wild berries. Lingonberry, which is somewhat similar to cranberries, often accompanies Swedish meatballs. Cloudberries, found in the marshy region of Lapland, have a sweet flavor and are eaten with ice cream.

Mornings in Sweden begin with frukost or breakfast, a buffet-style meal consisting of open sandwiches with a choice of toppings such as cheeses, cold cuts, ham, tomatoes, caviar and a sweet spread made from butter and whey called messmör. Sweetened Swedish breads like sirapslimpa and non-sweetened breads like surdeg are often seen on the breakfast table. Swedes are avid coffee drinkers and they like it freshly brewed and strong. Konditorei are small confectionary shops in Sweden, which also prepare and sell delicious coffee.

In the north, Pitepalt or potato dumplings with pork filling are often eaten during meals. Pytt i panna, is a much loved dish in the southern region, consisting of potatoes, meat and eggs. The small Baltic herring called strömming is an important accompaniment to meals in the east coast. All of these dishes are usually served with traditional rye bread. The ever-popular Swedish meatballs or köttbullar are made with ground beef or pork and served with potatoes, gravy and lingonberry jam.

A great place to visit for a light meal is a gatukök or street kitchen. These tiny eateries serve snacks like sausages and burgers. There are also special sausage stalls called korvstånd. Lunch is the main meal of the day in Sweden and many restaurants offer special lunchtime meals at discounted rates. Opt for the dagens rätt or set dish of the day, as this is a great way to try out husmanskost or home cooking. Lunch is eaten early, even as early as 11am; while dinner service starts at 6pm. Apart from Swedish restaurants, there are also those that serve international cuisines like Italian and Chinese.

Taking a Stockholm Food Tour is a great way to sample Sweden’s culinary traditions. It is a four hour guided tour that features uniquely Swedish foods. It starts at Hötorget, the site of the Hötorget Food Hall (Hötorgshallen) where visitors get a glimpse into the making of cloudberry jam. After some tasting of Swedish sweet treats, the tour heads to the world-renowned indoor food market of Östermalms Saluhall.

Coffee or kaffe is consumed in large amounts in Sweden. The act of drinking coffee is called fika and is done at home or in cafes as a common social tradition. Swedish coffee is on the stronger side, but not as strong as the espressos in Italy.

Among the alcoholic beverages, brännvin is the main Swedish specialty. It means ‘burnt wine’ and is made by distilling liquor from fermented grain or potatoes. Vodka is a type of brännvin, as it akvavit, which is seasoned with herbs. Akvavit that accompanies meals is called snaps and is drunk in a small shot glass. Snaps is ritually drunk at midsummers eve and Christmas celebrations. Sweden also makes some great beers and many new microbreweries have been set up in recent years. There’s even a seasonal beer made during Christmas time called julöl. It is a sweeter beer and is seasoned with typically Christmas spices. Wine production in Sweden is modest.

Strong alcoholic beverages are only available at government-owned shops called Systembolaget. These shops are designed like supermarkets and carry a wide range of alcoholic beverages. The drinks are taxed depending on the content of alcohol and as such some beverages like vodka can be quite expensive.