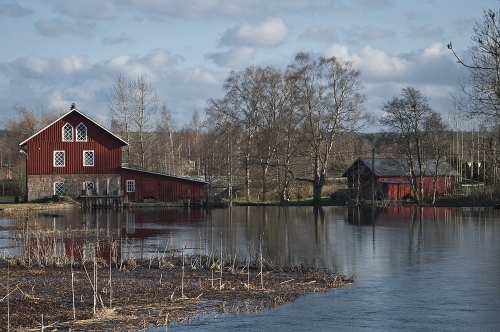 Sweden is becoming quite a popular destination for expats because of its living standards, economy, technology, nature, infrastructure and values. This country offers foreigners the possibility of a wholesome and well-balanced lifestyle. However, the cost of living in Stockholm (the capital) as well as some of the other major cities can be quite high. Expats often find Sweden more expensive than their home countries.

To cut down on expenses, many expats move away from the bigger cities and choose to live in the countryside, which is a lot more economical, especially in terms of accommodation. This also applies to a number of businesses who set up their bases in the rural areas to reduce their overhead costs.Several retired expats settled in Sweden also prefer to live in the scenic, slow-paced villages instead of the larger cities.

Rural Sweden is an attractive place to live and work, especially for those who are not looking for a very active nightlife. Many of the expats settle on properties that are just 30 minutes away from the coast and are quite close to the ski slopes too. Some of the most popular rural areas in Sweden include Skelleftea, Gavle, Norrtalje, Hofors, Lycksele, Boden and Dalsland.

There are no restrictions on purchase of property for foreign nationals in Sweden. Buying a house in the countryside is a lot cheaper compared to the cities. You can buy a 4-bedroom cottage with a 1-acre plot of land for about 375,000 Swedish Krona (approximately US $ 45,000 or € 40,000). Renting in the countryside is an option usually considered for short-term residences.

One thing to keep in mind is that there are no upscale stores, bars, restaurants, clubs and malls in the rural areas. However, all basic essentials are available at small local shops and pharmacies. Most people keep themselves busy with other outdoor activities like swimming, surfing, sailing, canoeing, fishing, hiking and trekking in the summer and skiing, skating and tobogganing in the winter. Everyone, including expats, in Sweden has the “right of access to nature”; this means that any individual can camp on private land without the owner’s permission.

Those who have school-age children should check for options before deciding to settle down in any village. There is at least one school in almost every county. However, the educational levels and facilities may vary. Opportunities for higher education are limited in these areas and most young adults have to move to the cities if they want to attend University.

Fortunately, medical facilities in Sweden are second to none, and this extends to the rural areas too. Healthcare is one of the most important factors that attracts older expats to the countryside. Every village has at least one proper hospital as well as several different doctors and specialists. County hospitals are known for providing both routine and specialist treatments. The national healthcare system throughout the country has been majorly subsidized by the government. All foreigners living in Sweden are entitled to the same medical facilities that the locals are, at fairly affordable prices.

The government has initiated a Rural Development Program in order to promote growth, entrepreneurship, employment and competitiveness. Most of the older expats settled in the countryside prefer to run their own farms, where they rear animals and grow their own produce. The younger expats often seek jobs or start their own companies. Industries that are currently growing in these areas include agriculture, horticulture, food and beverages, sporting activities and bed-and-breakfasts. Though unemployment is low in Sweden, finding a well-paying job in the countryside can be a challenge, especially for an expat.

The rural development program also promotes the Leader Approach, which allows people living in the countryside to take a lead in the development of their own region.

While Swedes are very helpful, even to foreigners, they can be described as introverts. They generally keep to themselves and don’t make friends very fast. Socializing can therefore be difficult for an expat, especially if you don’t speak the local language. It is therefore best to settle down in a county that has a sizable expat population.

Most of the counties are connected to the major cities and towns through a bus service. However, most of the expats settled in the countryside commute in their private cars.