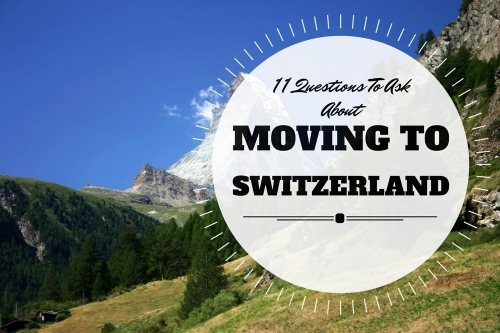 Switzerland, with its spectacular natural landscapes, cosmopolitan population, and high standard of living, is an expat magnet. A multilingual country with 26 cantons, Switzerland has four official languages: German, French, Romansch and Italian.

The country is also an attractive investment destination on account of its robust economy and favorable banking laws. Due to the stable economy, unemployment is low and lucrative jobs are easily available. Many expats work in the world-renowned banks and international businesses located in the Switzerland.Even though the cost of living is high, it continues to draw expats to its shores due to its high standard of healthcare, efficient public transport system and excellent private education.

Moving to another country can be an exciting, yet stressful time. There are pros and cons to the expat life, and almost every expat encounters challenges along the way. Doing proper research and taking into account every consideration can go a long way towards facilitating a smoother transition. This also means asking oneself the right questions. Here are 11 questions expats need to ask before moving to Switzerland.

Is this the right move?

For many, the answer to this question is only likely to fully emerge after they’ve already made the move. But it helps to hold it somewhere in your mind when moving forward with your decision to relocate to a different country.

Some may be moving to Switzerland for better career prospects, or on a new assignment from an existing employer. There are also many who choose the expat life because they want a change in their life situation. In such cases, it is important to remember that change will come mainly from deliberate effort, no matter where you move. A new country cannot bring you the happiness or rejuvenation you need if you are stuck in a rut currently.

Yes, the expat life is a drastic change and one that can be hugely rewarding and enriching; but it all begins with you and it takes work on your part to create the desired state of life. Many a time, stepping into a completely different situation sheds light on the parts that are controlled and those that are variable; but real change begins from within.

Do I require a work permit?

Switzerland has a dual system for allowing overseas nationals to work within the country. Citizens from the European Union (EU) are generally permitted to stay in Switzerland for three months while they seek employment. This can be extended to six months with a special short-term permit while they are actively seeking work and are registered at a regional employment center, and have a good chance of finding a job. The permit can also be extended for up to one year. On June 23, 2016, the United Kingdom voted to exit the EU. However, it will remain a member state for the two years during which negotiations are to take place. Citizens of non-EU member states will require a guaranteed work contract and a work visa before even entering the country.

Where in Switzerland will I be living?

There are many good reasons to move to Switzerland, ranging from the quality of healthcare to a low crime rate. But if you’re uncertain about where in Switzerland to live, here’s a quick guide on the top Swiss destinations for expats.

Berne
It often comes as surprise to newcomers that Berne is actually the capital of Switzerland. Berne connects the western Swiss plateaus with the eastern mountains, and lies close to the linguistic border of the French and German parts of the country. Berne is where the important political decisions are made. Well connected to the other major Swiss cities, Berne is the place to live for those who want to retire in Switzerland. Although it is the capital city, it is a much quieter than the other cities and everything is within walking distance. Also, a significant part of the population speaks English.

Zurich
Zurich is the economic epicenter of the country. It frequently features in polls of the best cities to live in, because of its high standard of living. Due to the presence of many multinational companies, job opportunities are available for foreigners. The city is also known for its many museums, art galleries and churches. The downside to living in Zurich is the high cost of living and the high demand for housing.

Lausanne
Switzerland is a great place for families, but Lausanne in particular is known to be child-friendly. Many expat families live in Sous-gare-Ouchy in Lausanne, which is well connected by train, bus and metro services, making it quite easy for those who need to commute to work. It has a pleasant atmosphere, accommodation is easy to find, the crime rate is low, and it is also home to two of Switzerland’s major supermarkets, Migros and Coop. Montchoisi is another residential area in Lausanne that has some beautiful apartments ideal for expat families. Many good schools are located nearby and the area also has a park, a pool, and efficient public transport that connect it to the nearby larger towns.

Geneva
Geneva has a considerable student population since it is home to the University of Geneva in Plaine de Plainpalais, located in the city center. It also has a thriving nightlife and has many trendy bars, clubs and restaurants. Flea markets abound in this area, and housing and food is lot more affordable here than in the rest of Geneva.

Interlaken
This is the place for those who are looking for adventure and excitement. Nicknamed the outdoor sports capital of Switzerland, there are a wide variety of outdoor activities available such as hiking, sailing, canoeing and snowboarding, whitewater rafting and even bungee jumping. While majority of the population in Interlaken speaks German, there are many locals who are fluent in English.

Basel
Basel is an important cultural center in Europe with all its heritage sites, museums and quaint old town. Overlooking the beautiful River Rhine, Basel is an important part of the country’s import and export services, since it is Switzerland’s only outlet to the ocean.

Will I find accommodation easily?

Switzerland has a high standard of living, but finding accommodation may be a challenging process. When it comes to accommodation, the country is mainly a landlord’s market. Demand exceeds supply considerably and hiring a registered relocation agent may be the easiest way to navigate the process. Reputed relocation agents usually have good contacts with the landlords, and can also provide useful advice such as how to draw up a favorable lease. Expats will find that housing standards are high and apartments are modern. Most have parking spaces and are well connected by public transport.

However, due to the competitive housing market and the high rates, it can take a while to secure good accommodation. Another drawback could be that Swiss apartment complexes usually have shared laundry facilities.

How will I commute?

As an expat in Switzerland, you will have the convenience of using one of the best public transport systems in the world. This system is made up of trains and buses that are punctual and modern. The costs are high, but there are discounts provided. The Swiss rail network is comprehensive. In the major cities like Zurich and Geneva, the trains are usually crowded during rush hours. There are intercity buses that connect the cities and tickets can be bought at the stations or online. Driving in Switzerland can be a pleasant experience as the roads are well maintained and road rules are strictly enforced.

While some health insurance companies provide coverage during travels abroad, it may not always be the case; therefore it is important to check with your insurance provider. If your health insurance does cover you while in Switzerland, you will still need to register with the residency office in the canton or state you are moving to. A time period of three months is given to complete this process. Once registered, you will be informed if your international health plan is acceptable by the canton. If not, you will also be provided with options for a local healthcare plan. Cantons in Switzerland give the option of one or two healthcare coverage providers. These are called ‘sickness funds’.

How does the Swiss healthcare system operate?

The Swiss healthcare system adheres to high standards. Expats get to choose where they wish to receive treatment. The doctors are fluent in English and waiting times are generally brief. However, there are monthly premiums and deductibles to be paid. Switzerland’s public hospitals are equipped with modern facilities and a basic health plan covers most of the treatment at these facilities. Not very different from public hospitals, the private hospitals have shorter waiting times and may provide certain specialty treatments that are not available at public facilities. The costs are higher at private hospitals. Expats must obtain their own health coverage within three months of coming to the country. Insurance premiums are varied depending on geographical area and not income.

Will I be able to afford the high cost of living?

The Swiss cities of Bern, Zurich and Geneva frequently feature among the top ten in cost of living surveys. The rural areas too can be expensive in Switzerland. However, the living standard is also very high, as are the salaries. Many expats feel like they are getting their money’s worth due to the efficient public services and excellent infrastructure. The cost of living and taxes vary among the cantons. Due to the scarcity of apartments, rental property rates have skyrocketed, and can take up almost 20 percent of the salary.

Swiss health insurance is another major cost and premiums are based on the area one lives in, and not salaries. Those who need to commute regularly will have to factor in the costs of public transport. Using a bicycle is one of the ways in which residents save on commuting costs, although one does have to buy an annual license. Swiss public schools are free, but since the teaching languages used are the cantons’ official languages, some expats prefer to send their children to international schools, where the fees can be quite expensive.

The Swiss economy is steadily growing, resulting in low unemployment rates. The industries of finance and information technology frequently hire expats. However, Switzerland has quotas for immigration and foreigners are hired only if a local is unable to take up the position. As a result, most expats who work in Switzerland are highly skilled. Jobs are available for English language teachers, but expats who also speak German, French and Italian stand a better chance of getting hired. The work ethic in Switzerland is mainly performance-based and work experience is valued, as are references from previous employers.

How does the Swiss education system operate?

There is a wide choice of schools in Switzerland. The public schools maintain high standards and are ideal for expats with younger children. Many expats choose to send their older children to international schools. There are certain factors to keep in mind when choosing the right school for your children; these include:

Am I prepared for culture shock?

Due to its multilingual and multicultural population, expats may not have to face much of a culture shock when moving to Switzerland. But there are some areas where adjustment will be required. For instance, according to local laws, those who reside in apartments can use some amenities such as washing machines only at certain times of the day. Most locals speak English, so language may not be much of a barrier. However the signs and transport announcements are in the local language. The Swiss society tends to be based on conformity and although it is a popular destination among foreigners, they’re usually only accepted once they incorporate the local customs.