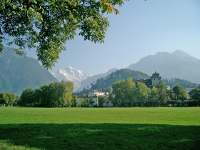 On paper, Switzerland seems like a fantastic place to live. A top-notch public healthcare and social services system, close proximity to other major European countries, and neutrality in pretty much every war mean that even the prohibitively high tax rate might not put you off. Plus, if you studied French, German or Italian at school, you’ll be able to speak the languages, right? Right. Well, almost.

Mention that Swiss French is the same as their own dialect to any person hailing from France and you’ll probably find yourself in the midst of an onslaught. Not only are there the usual idiomatic differences in expression that spring from living in another place, there are also whole other words that drop into conversation so that even the most fluent German, Italian or French speaker can find themselves mystified by the range of new words they’re required to learn. And then there’s Romansch, a sort of convergence language sitting somewhere between French and Italian, spoken by a significant minority of the population mainly around the Grisons region.With all the other stresses and strains of moving to a foreign country, the last thing you want to do is arrive believing you speak the correct language when you actually don’t understand much of what people are saying. With that in mind, we’ve put together a list of phrases that differ from their original counterparts to get you started.

Sac en plastique is the French phrase for ‘plastic bag’; nice and easy to remember. The Swiss, however, call it a cornet. Don’t get confused about which meal you’re being offered, either: Swiss French call lunch dîner whilst the French call it déjeuner. A similar thing happens to the evening meal; the French dîner becomes the Swiss souper. In the unlikely but urgent event that you might need to convey that someone has broken their neck, don’t use the French il s’est brisé la nuque. Its Swiss equivalent is s’énuquer; literally ‘to neck oneself’, so instead you’d say il s’est nuqué. When partying, in France people fait la fête, whereas in Switzerland they fait la noce. Most of these words at least sound vaguely related, unlike fœhn, the Swiss word for ‘hairdryer’, which is far removed from the more literal sèche-cheveux.

Driving terminology also differs wildly between the two countries; if you think a giratoire sounds like a 1960s dance school, you’d be wrong; it’s the Swiss French word for ‘roundabout’. Your indicator light is not your clignotant, like the French you learned at school, but signofile. And when it rains, it doesn’t pleut, instead sa roye. When you’re raising a glass to your newfound friends, don’t say santé. Instead, go for the far more English-sounding tchin-tchin.

The grammar of Swiss German differs somewhat from that of its neighbouring country, and we won’t go into the most complex details here. One of the main things it does differently, though, is its treatment of verbs, which can sound quite strange when translated back into English in their full contexts. For example, to say the English sentence ‘She comes to teach my lesson’ in German, you would say ‘Sie kommt meinen Unterricht zu lehren’, whereas in Swiss this would be changed to ‘Si chunt meine Unterricht cho lehre’, which would literally translate as ‘She comes my lesson come teach’.

At times in Swiss German you can see the influence of the Romance languages creeping in, for example an informal “Hi, how’s it going?” among friends would be translated as saluti or saletti, betraying an Italian influence. Should you be unfortunate enough to lose your wallet in Switzerland, don’t say Ich habe mein Portemonnaie verloren. Instead, go with the similar but different Ich han mis Portmone verloore. Hopefully this will get you all the help you need to be reunited with your hard-earned cash.

Swiss Italian is properly called Ticinese, and of all the languages spoken in Switzerland is probably the closest to its counterpart. Notable exceptions include chifer for ‘croissant’ instead of cornetto; azione in place of offerta for ‘offer’; and ritorno for (money) change rather then resto. Strong French and German influences can be heard in many of the Ticinese terms: a coté means ‘parallel’ or ‘next to’; a Besserwisser is a know-it-all.

Speaking foreign languages like a local is a worthy goal, but difficult and time-consuming, especially when resources are scarce. Given a while, though, you’ll no doubt find yourself picking up bits and pieces as you go along, and in the meantime, most Swiss people will understand the versions of French, German and Italian you learned at school. Did we miss any interesting idioms? Let us know in the comments.