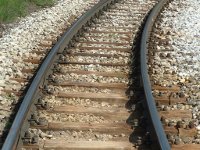 We loved Swiss trains. As expats we faced uncertainty every day, but we could always count on the trains for grounding. If the scheduled time was 12:30, we knew with certainty that we’d miss the train if we arrived at 12:31. When you’re running late there’s far less stress if you know you don’t have a chance of making it. Just relax and grab a glass of wine while you wait for the next train.

Once you’re ready to take the train, all of Switzerland is open to you! Europe, too, for that matter.

We lived in Geneva, tucked into France so far that it might as well be France. So we took advantage of the high-speed train to Paris. Liz and I zipped there (~200mph) to see the musical Notre Dame de Paris (in French), the trip very comfortable and easy compared to air travel. On another empty weekend we took a family trip by train to visit the Louvre, hassle-free.Switzerland is a trainlover’s delight. Geneva is fairly small, but we could hop on the train, tram, bus combination to get from work or school to our home in Cologny, several miles away. All large cities provide these commuter train options, often a very economic choice compared to car travel with the cost of gasoline several dollars more per gallon in Switzerland than in the US. That same train in Geneva connects in a massive spiderweb to other Swiss cities, going north on the west side of Lac Léman and all points east and south.

There are train trips that are just for the experience themselves. Funiculars give you a dramatic view above wherever you started from and a unique 40-degree or greater incline. Switzerland has over 100 of these! Many were built before 1900, and some still operate with a water counterbalance method. Water is pumped into one train at the top, and released from the other train at the base. Gravity pulls the heavy train down to the base, pulling the empty train up the tracks. With Swiss engineering, the two meet in the middle of the track on a short bypass. The cycle repeats ad infinitum, or for at least one hundred years.

You can do the luxury trip on the Orient Express or Glacier Express, making a winter journey through the Alps, stopping in St. Moritz or Zermatt. In fact, unless you helicopter in, you can’t ski the Matterhorn without taking a train. You can arrive in Brig or Visp by train and transfer your belongings on the cog-wheel train for the hour-long trip to the village of Zermatt. Or drive to Täsch and take the train the last seven kilometers. Carts await your arrival to help get your luggage to your hotel. Then if you want to ski, you take a small gauge train up the mountain. The Eiger too has a train station at 10,000 feet. The whole experience of skiing on and off a train is very different from the gondolas and chairlifts at US ski areas. We felt so European taking our ski break, eating rosti on the terrace of a chalet mid-Eiger, watching for our kids ski down and cross the tracks to join us.

If you’re likely to use a train for your commute or even make a few pleasure trips a month within Switzerland or Europe, a rail pass will probably be cheaper than individual tickets. The pass will work on multiple train, tram, bus, and ferry lines. Some offer discounts with other travel and entertainment partners (e.g. ski resorts), even free museum entry. There are many good deals, but it’s important to check the fine print before you make your purchase decision, since there will be many restrictions as well. The passes are tied to passports, so not transferable, have defined usage periods, may not be replaceable, and may not cover all fees for some routes.

Our most memorable train ride was the one we didn’t take. Liz and I were in the habit of seeking out musical theatre wherever we could find it. We bopped to London for a West End weekend for under $100 on Easy Jet. We saw Rent on its European stop in Geneva and we scoured the paper for upcoming events. When the ABBA/Tim Rice musical, Chess, was announced for Arbon, Switzerland we had to go. Arbon was the farthest east we could go in Switzerland without ending up in Liechtenstein. We got on the train in French-speaking Geneva and headed to German-speaking Zurich for our transfer. This is the Grand Central Station of Switzerland, not all that easy to navigate in a foreign language. We made the transfer and got to Weinfelden. Then we got on another train for the short trip to Arbon, proud of our accomplishment in getting there.

We wandered the town on Lake Constance, or Bodensee as the local German-speaking people know it. With time before the show, we stopped for food at an Italian restaurant. And it was Italian—not a word of English, or French, for that matter. Luckily pizza is a universal language. We ordered and then called my husband to check in. With loud Italian voices in the background, we joked that we had gotten on the wrong train in Zurich and ended up in Italy. And then we lost phone service. So my husband spent the night thinking his wife and daughter were lost in a foreign country—not worried, because we were capable expats, but under a cloud of misinformation. And we could have easily gone to Italy since the train spiderweb reaches out to Milan from Zurich. But the punchline came with the performance itself. The show was in English, but the tour originated in Denmark and the players had such heavy accents that we didn’t understand a word. Oh well, the music was great, we had good food on our “trip to Italy,” and the train rides were fun.