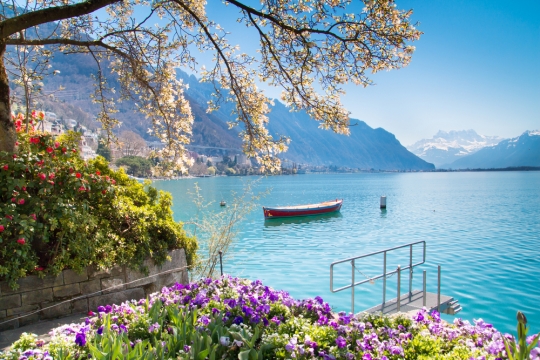 We are all getting more conscious of the need to look after our planet. Around the world, initiatives to clean up the air, the oceans and the food we eat are taking effect. In the UK for example, shops are required by law to charge for plastic bags, seeing a massive drop in the amount of non-degradable junk going to landfill.Some countries are better than others at looking after our global habitat. Venezuela, despite being in the grips of political turmoil, has passed legislation to protect more than half of its territory from development.

And it’s not always the law that stimulates people to change their habits and become cleaner and greener. In Switzerland, an organic food revolution has swept through the supermarket shelves and onto the nation’s supper plates. On average, Swiss shoppers spent USD$293 per person on organic products in 2015, the highest per-capita spending of anywhere in the world.

Fresh produce such as eggs, vegetables and bread are the most popular organic products in the Alpine nation, fuelling a rise in both consumption and the number of producers. Although the market share, compared to non-organic goods, was only at seven percent in 2015, it is rising.

With spectacular mountain vistas and crisp, clean air, Swiss people seem determined to protect their country’s pristine ecology. For many, the choice to go organic is a conscious effort to reduce the chemicals used in modern agriculture and limit the fossil fuels burnt in shipping produce around the world.

The country’s biggest producer of snack foods, Zweifel, has led the way in selecting greener oils to make its potato chips. Although EU legislation will eventually limit the amount of processed oils in foods, Zweifel have done away with them altogether in their crispy snacks.

Since November 2017, all Zweifel Pomy-Chips flavours have been fried in High Oleic, Low Linolenic (HOLL) oils, rather than the more widely used partially hydrogenated oils. Not only are HOLL oils better for consumers’ hearts and cholesterol, but they are produced in Switzerland.

Pietro Realini, Production and Logistics director with Zweifel says the switch has been a resounding success. “We’ve been able to achieve all our objectives,” he told Hospitality and Catering News, “a local and sustainable supply, a short supply chain, happy Swiss farmers and of course quality products.” Zweifel has been able to make the change across 100 products, and “what’s more, we’ve been able to do all that with no difference in price.”

The average Swiss diner consumes the most chocolate of any nation per year at more than 11kg of the country’s famous export, so it’s hardly surprising that chocolate is getting in on the organic act. Smaller brands are popping up to take on the giants of the chocolate world, offering organic and Fairtrade sweet treats. Such is the growth of the popularity of these products that even the mighty Nestle have restructured part of their business to develop organic products.

Organic expats in Switzerland can find chemical-free options on offer at the country’s biggest supermarkets. Coop supermarket can boast half the turnover in organic produce, whilst rival chain Migros lays claim to about a quarter.

Even though the big boys of the food industry are starting to join the organic revolution, Swiss shoppers still like to meet to see a familiar face when buying their veggies.

Farmer’s markets are enjoying a resurgence across the country, with producers selling their wares direct to customers. Although the supermarkets’ organic ranges can be half the cost of these market stalls, Swiss shoppers like putting a name and a face to their cabbages and carrots. “We have lots of regular customers from all parts of society, including people on low incomes,” says Naïma Blaser, who works on her parents’ stall.

Although the organic movement is busiest on the hillside farms, the purchasing power of Swiss citizens has ensured that markets, shops and restaurants cater to their new demands.

Le Marche de Vie, close to Lake Geneva, sports the usual health food grains and tofus, but also boasts a wide range of organic products. Converts can pick up not only food supplies but also chemical-free toiletries and cleaning products. In addition to a well-stocked shop, customers can enjoy the on-site restaurant to taste-test their groceries.

Organic markets are popping up around the city, with Thursday evenings being the shopping night for residents of Saint Jean.

Expats can even get on the organic kick as soon as they arrive, with Goodie Organic Food and Bar serving healthy options inside Geneva Airport.

Not only are Swiss people using market forces to improve the range of organic options, they may soon hold a referendum on the subject. Over 100,000 people signed up to support a ban on all synthetic pesticides for commercial agriculture.

The Swiss constitution means that any motion with 100,000 supporters can force a nationwide referendum on any topic. However, having reached that magic threshold, the motion may not go to the polls for another three years.

The ban, should a referendum pass, would have a big knock-on effect around the world, as the initiative would also ban the chemicals from any product imported to the country. Companies would have ten years to satisfy the new organic legislation or face a ban from selling their products in Switzerland.

There aren’t many countries in the world which would consider such a dramatic change to its food economy. Even in countries like Denmark, where organic consumption is higher, organic living is a consumer’s choice, where customers accept that they must pay more for the products they prefer.

It’s not clear what the likely outcome of the referendum would be, but this does illustrate just how seriously the Swiss take the question of organic produce.