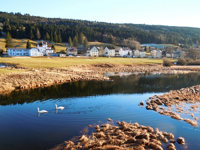 Moving to a new place is always pretty tough, but it should be a no-brainer if the move is to anywhere in Switzerland! While Switzerland may be a pretty expensive country to live in and that may seem daunting to most, the truth is, if you do move to Switzerland on work, you will be paid well. Minimum-wage or “wage slave” jobs, as we refer to them in the rest of the world, do not exist in Switzerland, and no matter what service someone performs, you can be sure that they will be paid fairly for it. This is part of the reason for the higher cost of living. Switzerland also invests greatly in the health, education, and welfare of its population, which is why almost all global prosperity, health, happiness and economic reports put Switzerland at pole position.Happiness can never be measured satisfactorily, but there are several determinants of happiness that can be measured. Here are a few points to consider if you’re going to be an expat in Switzerland.

Switzerland has a very strong economy and it has remained largely independent. The economic stability in the country has kept inflation rates down, despite the economic turmoil of the past decade in neighboring European nations. Today, the Swiss currency remains one of the strongest in the world and employees in big Swiss cities like Geneva and Zurich are amongst the highest wage earners in the world in terms of industry standards. A waiter or waitress in Switzerland for example earns on an average USD 43000 annually, as compared to the United States annual average pay of USD 19000.

There is fairness in wage pay, as demonstrated by the earnings of what would in most countries be low paying jobs. This ensures dignity of labor and high quality service. The Swiss rank high not just in terms of pay, but also for retaining talent and for attracting fresh talent. Despite all the free market rhetoric about small businesses in the United States, the Swiss economy has actually faired brilliantly, creating the perfect environment for small businesses. Small business enterprises or SMEs in fact account for 99 percent of the Swiss economy and they also employ 75 percent of the workforce.

The Swiss government spends just 2.7 percent of its annual GDP on healthcare, and yet its healthcare system is rated as the best in the world! How do they pull it off – the lowest government spending on healthcare in the developed world and the healthiest citizens? The Swiss enjoy universal health coverage, and depression rates are also found to among the lowest in the world. Mental health and wellbeing is a huge determinant of general health, so it’s no surprise that they need to spend a lot less on healthcare.

When it comes to education, the Swiss are again in the lead. Their primary schooling system is rated as the best in the world, while their math and science education and management schools are also rated as being among the best.
Not surprisingly the literacy and math and science test scores put the Swiss population well ahead of global averages.

As an expat, it’s always comforting to find familiar faces, or rather familiar ethnicities, or a mishmash of ethnicities. In this regard, Switzerland comes out on top, as it truly is a melting pot of culture, with 22 percent of its population comprising of residential and temporary foreign workers. If you move to cities like Geneva and Zurich, these figures are a lot higher.

With the United Nation’s Headquarters in Geneva, along with the headquarters for WHO, Red Cross and CERN, foreign nationals account for more than half of the city’s population.

As much as big government and state-funded social welfare is demonized in some parts, most populations that have actual experience with such government benevolence seem incredibly happy with it. Despite the fact that Switzerland is an extremely expensive country to live in, there are several perks that make it all worthwhile. In addition to healthcare being guaranteed for all, the country has an excellent public transport system that makes car ownership more of an inconvenience than a benefit! Unlike workers in most parts of the world, Swiss employees are rarely over-exploited.

Overtime is discouraged, there is parental leave as well, and employees get five weeks of leave a year, which they are encouraged to take! Happier employees are more productive and loyal, and the system works accordingly.

Switzerland is one of the safest places to live in, with one of the lowest crime rates in the world. Crime rates are so low that it isn’t uncommon to even see unescorted children walking alone, riding bicycles or travelling by bus.