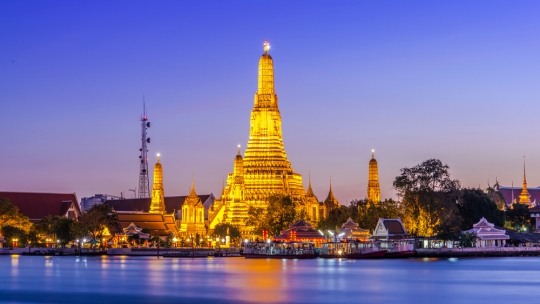 Bangkok, Thailand, is a vibrant capital city known around the world for many things, from its exciting nightlife scene and stunning palaces, temples and pagodas, to spicy food, charming streets and friendly faces. However, over the past few years, Bangkok has added something new to what makes it so unique, and that’s the increasing popularity of crime fiction novels written by expats who know the city well. Foreigners – or farangs – have been living in Bangkok for decades, and it’s no surprise that they have brought their experiences and imagination to bookstores. Reading one of these mystery books will not only keep you turning page after page but will also make you feel as though you’re right in the center of neon-lit Bangkok.With so many crime fiction novels to choose from, it’s hard to know what to pick. These recommended reads should point you in the right direction.

Jumpers is the latest book in Moore’s famed series that stars private eye Vincent Calvino, a half-Jewish, half-Italian lawyer from New York who gave up his job to become a detective in Bangkok. In this latest instalment, Calvino is called to investigate the death of a Canadian painter. However, even though the death seems to be a suicide, it soon becomes clear that there’s more going on than meets the eye.

The first book in this series, Spirit House, is still widely talked about today, as it was one of the first books ever written by an expat that explored noir in the majestic city of Bangkok. You can start with Jumpers, or you can start from the beginning of the Calvino series.

English writer John Burdett is one of the most popular expat writers of his kind, and it all started with his first book, Bangkok 8. This novel captivates readers even before the first page, with a neon-pink and yellow cover that could match perfectly with the signs on Soi Cowboy.

The book follows a murder that takes place under a Bangkok bridge, witnessed by two off-duty cops. When one cop gets murdered shortly afterwards, his partner – a complex character named Sonchai Jitpleecheep – wants revenge, and so takes the reader on a journey through the drugs, prostitution, and corruption of the city to get it.

Bangkok 8 will no doubt get you hooked on the rest of the Jitpleecheep series, each one a thrilling new crime case that takes place in the heart of Bangkok.

The Half-Child by Angela Savage

The first book in Angela Savage’s Jayne Keeney detective series, Behind the Night Bazaar, takes place in the hipster city of Chiang Mai, However, its sequel, The Half-Child, takes the reader to Bangkok and across other areas in Thailand.

Like Savage herself, Jayne is an Australian woman living in Bangkok. When Jayne is hired to investigate the suicide of an Australian woman that took place on the Thai coast, something quickly tells her that Maryanne Delbeck didn’t take her own life. In the process of solving the case, Jayne must negotiate strippers, expats and corrupt officials who are getting in the way. If you can’t get enough of the Jayne Keeney series, then make sure to read the third book, The Dying Beach, which takes place in Krabi.

The Laundry Man by Jake Needham

American expat Jake Needham’s Jack Shepherd detective series is one of the most well-known in the Asia-crime niche. Each one of his books (and there are many) are set in different parts of the continent, but The Laundry Man starts the series off in the chaotic city of Bangkok.

A major international lawyer from the U.S. who leaves his job to move to the city, the background of main character Jack Shepherd is similar to that of Vincent Calvino in Jumpers. Shepherd gets sucked into tracking down millions of dollars that were lost when a secret Asian bank collapses, and soon realises that the man coercing him is a man Shepherd believed to be dead. Now, Shepherd has to navigate a city that’s never felt so foreign, as he tries to survive the corruption, deceit, and extortion all around. If you like this book, make sure to also check out Needham’s classic The Big Mango.

British expat Stephen Leather has written many, many books, and is one of the top-selling authors on Amazon Kindle. It’s no wonder, then, that his thriller Private Dancer is one of the best Bangkok crime books out there. Many of Leather’s books are part of a series, but Private Dancer is a stand-alone quick read for anyone who wants to really envision the nitty-gritty atmosphere of Bangkok.

This book takes the reader into the life of travel writer Pete, who meets a woman called Joy in a go-go bar in Bangkok. He believes Joy is the love of his life, but comes to realize she has a dark side. This is a story that could take many possible turns, but you’ll have to read it to find out what happens.

The Queen of Patpong by Timothy Hallinan

The Queen of Patpong is the fourth book in Timothy Hallinan’s Poke Rafferty series. Much like his creator, Poke Rafferty is a travel writer living in Bangkok. He, his partner Rose and their daughter are living a peaceful life. However, a terrible reminder from Rose’s past comes back to shatter everything for which she and Poke have worked so hard. Poke feels as though he has already experienced Bangkok at its absolute worst, but that was nothing compared to what’s coming.

There are eight books in total in the Poke Rafferty Series, so it’s best to start at the beginning with A Nail Through the Heart and end with the most recent book, Fools’ River.

There are thousands of fiction books that have been written about Bangkok and Siam. However, these days, it’s crime fiction written by expat writers that’s taking over the world, one series at a time.

What are your favourite crime fiction novels? Let us know in the comments!