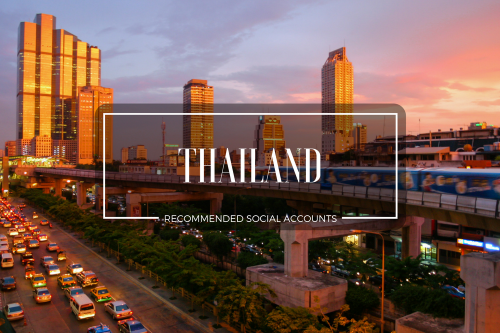 At Expat Focus, we like to be on the lookout for resources around the web that could help prospective expats adjust to their new countries. Today, we’re taking a look at Thailand and some of the social media accounts you should be following if you’re thinking of moving there.Thailand Expat/Thai Discussion
Facebook Group

With almost eight thousand members in this group, questions don’t go unanswered. There seems to be no question that this group can’t handle. If building a social circle, renting a home or finding activities for the family are high on your ‘must have’ expat life list then this group is an excellent starting point. Always friendly and with a healthy dose of sarcasm thrown in, everyone is welcome to join this Thai discussion.

This region-specific group has great tips for expats and travellers alike. The group directory holds plenty of useful information and links to everything from immigration to seasonal events. The two thousand plus members of the group are happy to share information and experiences: anything to make life in another language and culture a little easier for expats old and new.

Much more than buying and selling happen in this group, though there is a good deal of that too, useful if you need to pick up something for your new expat home in Thailand. With over twelve thousand members you are likely to find someone who can answer any queries you have about life in Thailand, or at least get some pointers in the right direction.

British born and a self-confessed proud Brummie, Phil has been living and working in Thailand for over ten years. Together with his Thai wife and his no longer rose tinted expat glasses he enjoys sharing his explorations of the country and his wide knowledge of working as an English teacher abroad. Definitely compulsory reading for any potential teachers, not one to sugar coat, his advice is always truthful.

Trilingual Karsten comes from a British and German family and worked all over the world before settling in Thailand. His Thailand starter kits contains a wealth of information on the less glamorous but essential sides of expat life such as health insurance, finding a job and opening a bank account. He tweets about his passions, entrepreneurship, technology and travel as well as a healthy number of posts in defence of his beard.

You get two for the price of one with this couple! Brit Simon and American Kristen both currently teach and live together in Bangkok. Passionate travellers, they met up at various places around the world before deciding to base themselves in Thailand. Their social media is enough to inspire wanderlust in anyone and comes with a healthy dose of realism, for which any expat will be grateful.