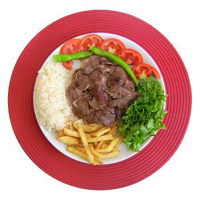 From aromatic home-cooked stews to spicy kebabs, Turkey’s culinary heritage is a blend of varied influences. The flavors that arose from the kitchens of the Ottoman court continue to inspire Turkish cooking today, as do the cooking methods and tastes of the many ethnic communities and cultures that have inhabited the land over the years. While there are many delectable delights in store for anyone who makes a culinary journey through the country, here are five typically Turkish dishes that you must try during your stay.

This dish comprises of lamb stew served on a bed of puréed roasted eggplant.A classic Ottoman recipe, the name Hünkar Beğendi translates to the ‘the Sovereign relished it’ or more simply ‘Sultan’s delight’. Eggplant dishes are hugely popular in Turkey and this one uses pieces of lamb to offset the creaminess of the puree. The lamb is cooked in buttery tomato gravy until soft and succulent. The dish can also be made with chicken in place of lamb. You can find Hünkar Beğendi in many restaurants across Turkey and it can be found in its most traditional form in those restaurants that specialize or promote Ottoman cuisine. Hünkar Beğendi serves as an ideal dish for the cooler winter months.

Kokoreç is one of the most consumed fast foods in Turkey. It is also a popular dish among the nomadic Turkish population. It consists of lamb or goat intestines wrapped around sweetbreads that are placed on skewers and roasted horizontally over a charcoal fire. Once roasted, it is chopped along with tomatoes, spring onions and green peppers and served in quarter breads. Kokoreç is usually served with side dishes like pickled cucumbers and peppers. This dish may not be on the menu in most restaurants, but is available in almost every street. However, eating Kokoreç at street stalls may not be such a good idea since it’s very important that the intestines are cleaned thoroughly for health purposes. When the dish is cooked at home, it is common practice to perform a laborious process of cleaning the intestines under cold running water, while gently turning them inside out to get rid of all impurities.

A type of Turkish pie with fillings of meat, potato, spinach or cheese, Börek is available at most bakeries in the country. There are also dedicated Börek shops that specialize in making different varieties of the pie. One variety of Börek is called Su Börek, which means water Börek. This is made by boiling layers of dough in large pans and adding a mixture of parsley, feta cheese and oil between them. Once it is brushed with butter and cooked in a masonry oven, it turns into very soft, moist pastry. Another popular type of of Börek is Sigara Börek (cigarette Börek), which consists of long, thin pastry with a filling of potato or cheese.

This traditional Turkish milk pudding features a rather unusual ingredient – chicken. During the Ottoman period, this dessert was often served to the royals and till today it remains one of the country’s signature dishes. Eating a chicken and milk pudding may not sound very appetizing, but Tavuk Göğsü contains not the slightest trace of chicken flavor. The finely shredded chicken breast is used mainly as a thickening agent and is thoroughly cooked and processed in the course of the preparation. The result is a thick, creamy sweet treat that may be enjoyed plain or with a hint of cinnamon on top.

Dondurma is Turkish ice cream made with milk, sugar and mastic. Salep is a flour obtained from the tubers of a type of wild orchid called Orchis mascula. It lends a distinct stretchy, elastic character to the ice cream, which prevents it from melting or dripping even as it slides over the edge of the cone. The ice cream mix is pounded and stretched in a special Dondurma-maker for at least 20 minutes, after which the elastic mass is kneaded, cut into pieces and served. This delicacy may be available only in Turkey since the variety of orchids from which Salep is obtained is deemed an endangered floral species and therefore the export sale of the flour is prohibited.