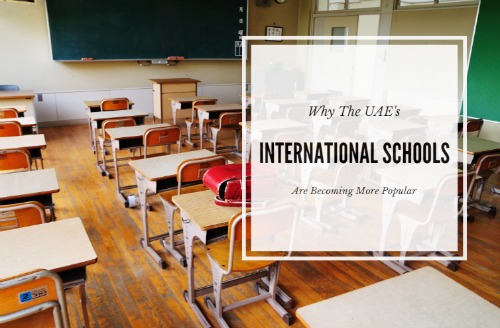 The expat community in the United Arab Emirates has grown by leaps and bounds in the last few decades. People from all over the world including the UK, Canada, Australia, and the US, as well as other parts of Asia, are settling down in this part of the Middle East with their families.

Furthermore, many of them are choosing to educate their children within the country.As a result expats actually outnumber the local students by a fairly large margin in some schools. Given the current scenario, further growth is inevitable. This in turn has lead to a huge demand for good international schools across the Emirates.

News reports state that there are more than 500 international schools in this country, which is one of the highest numbers globally. By most accounts, the UAE is the leading country in the world in terms of English-medium, K-12 international schools. In addition, while the actual number of schools in this country may be on par with China, student enrolment in the UAE is the highest around the world. These institutions are diverse and follow various curricula, the most prominent ones being American, British (NC, GCSE), and International Baccalaureate (IB). Several foreigners also opt for Indian (ICSE, CBSE), Canadian (MOE), and French curricula.

The UAE is divided into seven emirates, of which Dubai has the major portion of expatriates, followed by Abu Dhabi, the capital. The number of international schools is also much higher in these two places. Dubai alone has around 253 schools.

Apart from the growing population of expats, there are several other factors that are increasing the popularity of international schools in the UAE. These include the following.

There is a high demand for the National Curriculum of England among the local and expat student population in Dubai. Most parents too prefer to have their children study the British style of education. Almost 50% of the international schools therefore offer the British curriculum. For more information on this, click here. At the same time, it is possible for students to choose from the curricula of various countries.

The top educational institutions in this region differentiate themselves from their competitors through accreditation by at least one major, globally-recognized accreditation entities. In fact, in Dubai, it is mandatory for all international schools to be accredited by at least one specific body. This gives the students and their parents the assurance that the school is meeting a high standard of quality.

Moreover, all the top international schools across the world are now becoming a part of at least one well-reputed, global association, like the Council of British International Schools (COBIS) and Association for the Advancement of International Education (AAIE).

In any country that has very high standards of education, getting admission to a well-reputed school or college is a challenging process. Students, and sometimes parents, are made to go through various screening rounds before they are accepted. In such a competitive environment, children with special learning needs find it even more difficult to get into good schools. Fortunately, educational entities in the Emirates are bringing about a change to make things easier for such learners. One of the main factors making international schools in this country so popular, is their movement towards inclusion. This is a result of a growing demand from local and expat students.

According to a research survey conducted by the International School Consultancy (ISC) Research & Next Frontier Inclusion (NFI), an increasing number of international K12 schools have begun to embrace the opportunities as well as the challenges inclusion brings. This means that provision for students with special learning needs will no longer be an exception. Legislation supporting the concept of inclusion is being implemented in several countries like the US, Canada, the UK, and Australia. Naturally, expat parents are expecting similar provisions from the UAE’s international schools too. Moreover, local parents that don’t have access to special teaching support in state schools are also turning to international schools for a solution.

In the survey conducted by the ISC it was observed that about one third of the participating schools classified themselves as selective. The statistics showed that 27% of them gave admission to students on the basis of tests and previous school records. The survey also highlighted that around 6% of the participating institutes are Highly Selective. The remaining considered themselves Non Selective in varying degrees. Of them:

Among the schools that are following inclusion, integration with the mainstream classroom may vary to a great extent. For example:

– 35% of them claim to follow an inclusive approach as far as possible
– 25% state that they use learning specialists as consultants
– 10% use a learning specialist for co-planning, co-teaching, and co-assessment, along with the mainstream teacher (known as the push-in model)
– 44% say that they make use of push-in as well as pull-out (resource room) models
– 5% employ the pull-out model as the main learning approach

The NFI observed that there is a lot of ambiguity around the relative merits and demerits of the different provision models. Obviously, higher understanding of each has to be developed.

One of the aspects that were very evident in the survey is that most of the international schools are not too comfortable with an exclusionary attitude towards learners with special needs. At the same time, the authorities admitted that are often short of skilled staff. Only around 33% of the schools that participated in the study said that they have employed highly qualified special educators and about 21.5% believed that their staff members were mostly qualified. A majority of them – 39% – felt their faculty had some qualifications, while 14% stated that their teachers had no special skills in supporting kids with learning differences.

While 84% of the participating schools are willing to enroll children with special learning needs, only around 35% of them expressed satisfaction with the provisions they had for such students. This is a definite misalignment and the NFI is putting a taskforce together to propose higher standards that can enable an institution meet the needs of various student groups in international schools.

The total number of English-medium schools has crossed the 8,000 mark globally. These institutions cater to roughly 4.26 million students. Furthermore, reports by the Oxford University and the British Council state that the need to be educated in the English language is a growing phenomenon. Research by the ISC predicts that by the year 2025, there will be more than 15,000 English-medium international schools teaching at least 8 million students.

In the Emirates, there has been an increase of 21 new English medium international schools in a short span of 2 years. The total number of students (between the ages of 3 and 18) attending such institutions is 545,074. This is by far the highest enrolment of any Asian country by a significant margin. Approximately 36% of all the international schools have a student population of more than 1000.

In the UAE, almost all the international schools provide good quality English education with globally recognized curricula. Many students as well as parents consider this a stepping stone towards gaining a place in a Western university. These schools also give students an insight into the western style of teaching.

Authorities from universities in the US, UK, Canada, Australia, and New Zealand also state that foreign students from English medium international schools generally meet their criteria and they have had adequate exposure to internationally recognized curriculum.

The demand for international schools it isn’t just high among the expats settled in the UAE. Students from other parts of the world often move to the Emirates for good quality English education. Fortunately, the Arab population also benefits, as the governments of Abu Dhabi and Dubai have set no limit on the enrolment of local kids in international schools.

Almost all the international schools in Dubai and Abu Dhabi have a healthy mix of students from various parts of the world in addition to the local population. In fact, it is also common to see teachers from many different countries working in such schools.

It has become a common practice for schools to hold culture-related events, in which students, parents, and teachers are actively involved. This provides a great platform to children as they get to learn about and experience different cultures while they share their own.

There is stiff competition in the UAE, and getting into a well-reputed school isn’t very easy. Seat scarcity is a major problem and finding a slot can be a huge challenge for students as well as their parents. In fact, most parents in the UAE are under heavy pressure to seek admission as soon as possible; applications have to be made well before the child reaches school-going age.

Some of the best international schools in Dubai and Abu Dhabi include: