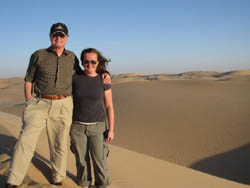 I am a 40-year-old journalist from Canada.

I moved to Abu Dhabi from Ottawa in April 2008 to help start up an English newspaper, The National, serving the UAE and region. I had always wanted to work abroad and never had the nerve or the opportunity – when I got this chance to work with other newspaper people from all over the world, it seemed like an obvious thing to do.What challenges did you face during the move?

Before leaving I became obsessed with whether I would have to pay Canadian taxes or not (it turns out I think not), but I think that was just a way to focus my worry about making such a dramatic move in my life. When I look back on it now, it was just a nutty thing to do: leave a beloved circle of family and friends behind, not to mention a great job as a columnist in the nation’s capital. It was much simpler to leave, however, than after I arrived. I had serious culture shock, missed my family and friends terribly, struggled somewhat in my new position as an editor – even though from about a day after arriving I found myself in a great circle of people who would become some of my best friends. I was also living in a not-very-nice hotel, and spent 10 months there, due to a severe shortage of accommodation at the time.

It was impossible to find accommodation in Abu Dhabi at the time, so after 10 months I was lucky to secure a coveted company apartment quite close to work. It’s not the best and very expensive (US$2000 a month) but even though there are more places out there, I would have to commit to a year and get my company to pay the rent for a year – all rentals in Abu Dhabi require either a year or, less commonly, six months of rent upfront. I like the flexibility of company housing, which I could leave at any time.

I don’t have much of a relationship with locals, although I have been to the odd dinner and dealt with them through work. Due to the influx of expats to help build the UAE, Emiratis have become somewhat segregated. Having said that, some of my colleagues have tried much harder and become much more assimiliated into their world. And the Emiratis I have met have been truly lovely – warm, welcoming generous people.

The winter weather! It is gorgeous and sunny here every day. I like the lifestyle – lots of dinners out, brunches, hanging out with my friends. We still work hard, but somehow it’s less of a grind than back in Canada. The travel opportunities are amazing because I am in the middle of everything. I have been to 12 countries and counting. I also don’t have to have a car here, taxis are cheap and plentiful. I also absolutely love the diversity all around me. I am a minority here, even a trip to the supermarket is filled with lots of different languages, tons of different types of dress. I work with people from Bulgaria, UK, Australia, all over the Middle East – it’s an adventure every day.

The summer weather! It gets so hot here, above 50 degrees Celsius. It’s sickening and claustrophobic and you just try to make it through while clinging to your sanity. I also worry a lot – although I am trying not to – about what will happen when I feel like I want to go back to Canada.

I would say just live in the moment and make your life about where you are. Start learning the language as soon as you can – you will feel so much more connected to what is happening around you. Soak up everything around you and appreciate the diversity. Make a financial plan! It’s possible to use this opportunity to get yourself much farther ahead financially than would ever be possible in the West. It is also possible to get caught up in the lifestyle and get into (possibly even greater) debt.

I will probably return to Canada to settle down at some point, although I might like to work in another country first. I’d like to expand on my blog, A Canadian in Abu Dhabi, and write a book or a novel about the crazy life here.

Read more about Ann Marie and life in Abu Dhabi at www.annmariemcqueen.blogspot.com