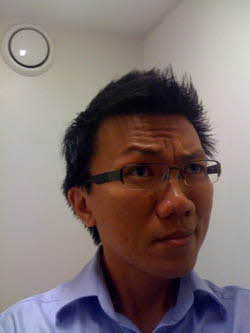 I’m CK. That’s the initials to my name and after awhile, people around me just call me that. I suspect they’ve forgotten about what my actual name is and I’m not about to remind them.

Moved to London in the summer of 2007 with my wife. Well, there was an opportunity and it was then or never so here we are. How time flies, come to think of it.

Irony is that both of us have never set foot into London prior to our move. On hindsight, it was pretty foolhardy. I mean, plenty could have gone wrong as we knew no one here to begin with and had to figure everything out from scratch. We spent quite sometime trying to figure out the Tube and finding accommodation.Can you tell us something about your property?

A one bed rental. We stayed in our previous rental for three years before moving. Conditions weren’t ideal in the first property, with drunkards roaming on the streets in the middle of the night. But try as we did, we couldn’t find another place to move to until recently and thank gawd we did as there’s a huge construction site looming beside our previous place now.

Are you employed or self-employed?

Employed. Well, coming from Singapore, which is outside the EU, there are obvious issues procuring a work permit. From my understanding, the employer has to show that they have tried getting someone from within the EU to fill the position before opening it up to others. Otherwise, I have to add that Londoners are a fine lot though I have difficulty understanding some of the contextual jokes initially (and still do sometimes). That makes it a tad awkward when meeting clients for the first time but hey, I’m getting there.

A lot it seems. Well, I do hear a whole lot of languages along the High Street. I was reading an article on the newspaper back home the other day. Apparently, Singaporeans are over represented in London (approx. 9000). Well, given our small population to begin with, I guess that’s quite a bit.

Locals? Well, London is home to one of the most diverse population in the world. I heard that there are over 100 languages (not counting dialects) spoken in the capital alone. If by locals, you mean Londoners, well, most of them are fine really. The English, however, are polite to a fault but then again, they are well known for that. Once you have mastered your ‘sorry’ and ‘thank you’, you’ll be fine.

The bountiful activities to do in the capital. No longer am I restricted to just movies and restaurants during weekends. There are theatres, museums, musical and comedy performances, and even local guided tours (I personally recommend London Walks). You’ll never run out of things to do in London. Well, I know I haven’t!

Like most Singaporeans, I adore my food. The cravings for some of the local delights keep me up some nights (I’m serious!). Luckily, my wife is rather adventurous in the kitchen and could conjure up most of the dishes found in Singaporean hawker centres.

Sometimes, it’s not all about money. Yes, it matters but it shouldn’t be the sole deciding factor why you are moving. You’ll be surprised how quickly the intangibles add up. Keep an open mind for new stuff, you might just find that you’ll end up liking it.

No firm plans as yet. Looks like I’ll be staying put for the time being. Let’s see.

After being in London for the past three years, CK is still discovering bits of London through www.singaporeaninlondon.com

Check out London Chow at www.londonchow.com where he gives his two cents worth on where to eat and where to avoid in London.