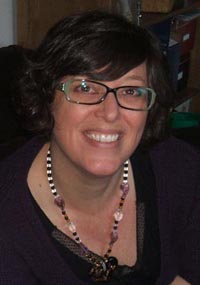 I am a 41yr old Aussie girl from Melbourne who has loved living in the UK for the last 7 (almost) years. I love reading, cooking, eating, music, travelling, watching tv talent shows – oh, and blogging!

I left my settled and comfortable life in Melbourne and arrived at Heathrow Airport in January 2004. The catalyst for the rather sudden decision (a week in November the previous year) was running late so me and my 2 super huge suitcases sat in the grey dawn of Terminal 4 and wondered how all this was going to work out. But I just knew that this was the next ‘journey’ for me, no matter how it looked right then or turned out in the future.What challenges did you face during the move?

Said catalyst was pleased to see me but not very supportive (we were only in touch for about 6 weeks after I arrived) so I just got on with trying to get work (unbelievably tough at a senior level), build a network of friends (through contacts people from home had given me) and working out where I might want to live. On top of this I broke my elbow a week after I arrived by slipping on a patch of ice the morning after an incredibly beautiful snowfall so that was a ‘conversation starter’ to say the least and people give you a bit of space on the tube if you are sporting an obvious injury.

Jobs for me were likely to be on the West side of London so that’s where I focused my search. I never house-shared before and that’s all I could afford with rents being so high so my first year in Brentford was a shock to the system – and made me determined to live on my own again as soon as I could afford it. From Brentford, I moved to Kingston Upon Thames which is SW of London and have been here ever since, having found an amazing little (and I mean little) maisonette flat on my first trip around the area with a local estate agent (it was the second place I saw). Pretty lucky, eh?

Not really, although my best friend (an Aussie I met over here in my first 2 weeks and who lived around the corner in Brentford) lives 10mins walk away with her husband. I’ve tended to steer away from traditional Aussie haunts as the majority of people I bump into there seem to be less settled over here and plan to go home – whereas the UK is home for me now.

I have a very mixed bag of friendships but the people I bond most closely with tend to be the expats – whether they have moved to London from other parts of the country or are from overseas. Expats really help each other and I think that’s because no-one can ever explain to you before you do this the joys and frustrations of building a new life like this – expats just get it. And they are full of useful bits of information about how to do things easily/cheaply/for free.

There’s a richness and groundedness about my life here even though it’s been tough and I’ve not yet been able to achieve the equivalent salary or position to that which I had in Melbourne. I can feel challenged and tired and joyful all in the space of about half an hour.

The expectation from others that you will some day ‘go home’. I know life turns out in unexpected ways but I cannot ever imagine living in Australia again – bit of a round peg in square hole thing. There’s also the expectation from people ‘at home’ that you are the same as when you left – more round peg/square hole!

Since moving to the UK, I’ve explored new passions and really understood what I want out of life without all of the trappings and the pressure of others wanting to live vicariously through what you choose to do.

The big challenge is I hate the phone calls. I’m lucky that my family understands but this whole thing of spending hours on the phone with friends on the other side of the world doing the update thing is something I avoid like the plague. It’s actually what started me blogging – little updates more regularly.

Tough it out – I’ve met lots of amazing people and experienced extraordinary highs and lows – being an expat teaches you stuff about yourself that just stays out of sight if you are only willing to play it safe. And trust yourself.

Reach out – Many people I’m not in touch with now. Sometimes the people you meet are there at the right time in life, and then the time passes and the rightness fades – but the memories and experiences add an incredible richness.

To stay in the UK and discover more things to love and more challenges to be overcome. And to never say ‘I wish I’d been brave and done that…’

Read more about Kym's life in the UK at GiddayfromtheUK