I have been an educator for over 30 years with a Master’s Degree from the University of Wisconsin. I have extensive professional experience both in the USA and in the Middle East. I was also an award winning sales representative in the pharmaceutical industry.

My overseas experience began in 2004 as I became the Executive Director of the American Business Group (American Chamber of Commerce) in Abu Dhabi, United Arab Emirates, for two years which included fund raising, membership sales and development.

I have been a professor of graduate and undergraduate business management and communication courses.


Where, when and why did you move abroad?

My husband and I moved to Abu Dhabi in 2004 for his career in higher education from San Miguel de Allende, Mexico where we had been living for over six months.

In 2008, we returned to the UAE to live in Dubai for three years until 2011. Again, my husband’s career took us back to the Middle East. This time he was the Principal of two all boys government funded, technology based high schools in Dubai and the other in Ras al Khaimah.

This time my new position was as the Executive Director of ITEC, in Knowledge Village, Dubai (an ESL language-teaching institute for adults from all over the world).

It was challenging to find our way around the larger city of Dubai due to increased traffic, more roads and highways and the sheer volume of people living in a fast growing city. Abu Dhabi was a much easier city to navigate because it is laid out on a grid and there were fewer people because it’s the older city, as well as the capital.

My 30-mile commute to work took two hours each way from our flat. The stoplights, the round-abouts, bumper-to-bumper traffic and many pedestrians all increased the stress and drive time.

It was also challenging to go grocery shopping locally because most labels were in Arabic and many clerks did not speak English. However, it was easier to shop at the large grocery and retail stores called Carrefour which catered to a more international customer. Approximately half of the labels were in English and the other half were in Arabic. But, there was a large selection of fruits, vegetables, meat, fish and other goods. I found myself looking at the pictures on the cans and made decisions based on that visual. I could not always understand cleaning supplies though.

There were challenges finding taxis at times too. Not enough taxis, it was very hot and humid and too many other pedestrians waiting for taxis. Since all of our flats were unfurnished and my husband used the car daily for his job, I needed to use taxis daily.

I also had to furnish and start new households three different times. Not only that, but we moved eight times in nine years! That meant using taxis and filling them with a mop, broom, bucket, cleaning supplies, glassware, dishes, kitchen utensils, bedding, pillows, lamps, rugs, towels, etc. Anything that you need to start a new household or a new apartment, from scratch.

We never lived in an American compound as many expats did in the Middle East. We knew a lot of Americans from various companies and they all lived in compounds filled with villas and Americans only. We also met Brits who had the same living arrangements, Australians, Canadians, etc. They also had their own private clubs with swimming pools, activities, restaurants and bars. But, again, they would only associate with expats from their country due to the nature of their socialization patterns.

We did not live in that manner. We always rented a flat or a villa living next door to people from other countries, cultures and nationalities. I loved the aromas as the women cooked. I found that I could identify which country they were from by the seasonings being used. I interacted with everyone in my apartment building and got to know the men and women from many other cultures.

To me, living abroad meant living with other cultures and people NOT like me. That was one of the most interesting and exciting things about living abroad. 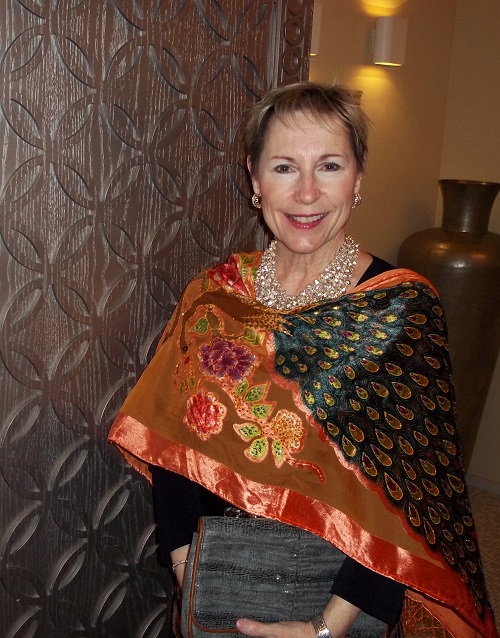 As I said, I loved the intercultural exchange as I got to know ladies and men from other countries. I also taught ESL to adults from all over the world. But the most interesting students were the ladies from the United Arab Emirates. Most of my classes were segregated – Women Only or Men Only. The classes at ITEC in Dubai were typically co-educational. I also was a substitute teacher for an all girls school in Dubai and an international school (K-12) in Dubai.

As I taught the young women and the older women in Abu Dhabi, I came to know them as friends. I was invited to share meals with them in their homes, I met their families (not the men though), I went shopping with them, I went to their weddings and we had great times together!

They were super intelligent, very curious about everything Western, lovely and friendly women who were good students, wanted to learn English, wanted to get married, and wanted to be good mothers and wives. This was the cultural exchange and experience that I loved about living in the Middle East!


What do you dislike about your expat life?

At times it was difficult to communicate with people from other cultures due to their accents and my not understanding their English. Sometimes, as a teacher, if I could not get my message across in English, I had to ask a student to basically translate into Farsi or Arabic so more students in the class could understand the concepts.

Also, there were rules in society for expats, yet no rules for the Emiratis. We expats were expected to obey traffic laws and rules of the road. Yet, a citizen from the UAE could break laws and not be punished. Also, men had a tendency to pop right in front of you in a line, no matter where you were. I had that happen in hospital, grocery stores, restaurants, etc. They felt privileged and protected by being a member of the United Arab Emirates.

The society was very patriarchal, as I expected. But at times, this frustrated me as I made more and more friends with the women of the Middle East. If I had a lunch or coffee planned with one of my Middle Eastern lady friends and her husband decided that he didn’t want her to go, he simply forbade her to go. She would text or call me telling me that her husband said she could not go out that day. I felt very badly for these women who, of course, must obey their husband, their father or their brother, whoever is the family patriarch. No independence for the women in these countries. Unfortunately, I don’t see that changing within their societal norms, culture or religion.

Well, living abroad simply widens your horizons more than you can ever begin to know until you have the experience. I realize that freedom and democracy are values that we take for granted as citizens of the USA. Other countries simply do not govern or operate by those rules. As women, we are blessed to have the right to vote, to drive a car, to take a job, to make choices about our pregnancies and so much more. The women in the Middle Eastern countries in which I lived do not have even those basic rights and freedoms.

Also, people in the USA are not as geographically and politically aware and knowledgeable as other citizens. I found a disconnect with friends and co-workers upon my return from the Middle East because their experiences and world awareness has been limited and is narrow.

I feel so fortunate to have had the opportunity to live and work abroad, especially in the Middle East as a western woman.

Go for it! Live in another country for six months to a year! Find an opportunity to live abroad and embrace it! Research the country in which you will live and surrounding countries, especially religion, women’s rights, employment and living conditions. Find a city large enough to have public transportation, restaurants, coffee shops, universities, etc.

But be prepared for the unexpected and go with the flow. Also, meet new people every opportunity you have. Actually make new friends with men and women from other cultures. Go out to eat with them, cook with them, meet their families and enjoy your differences! It will be the most rewarding time of your life!

My husband and I travel often and have begun using Airbnb in other countries. We love the experience of living in someone’s apartment, meeting the host, learning about the neighborhood from them and not living in a tourist area or hotel. It’s a great experience.

We just spend all of August in Europe – Amsterdam, Germany, Austria, Budapest, and Prague! Fabulous fun!

We traveled to Spain last year for a month. In 2017, I’m going back to do the Grand Tour of Spain with three lady friends. Then, I’m taking my 18-year-old granddaughter on her first trip to Europe. We are going to see most all of Italy for 15 days in June! I can’t wait to share my love of travel with her!

My husband and I are also planning to return to Ireland and stay in Airbnbs this autumn!

Again, we love going to local pubs, driving our rental car or taking public transportation and just meeting and talking to people from all walks of life. It’s so interesting and enriching!

You can keep up to date with Barbara's adventures on her blog, Middle Eastern Life for One American Woman.