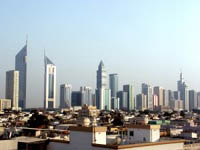 Joining a club or group in a new country is a way to make the most of your expat life. These clubs, founded with various aims in mind, are a great way to connect with people from your home country and keep familiar traditions alive, while integrating into the new culture at the same time. The UAE is an expat hub and there are many clubs and societies to cater to the interests and welfare of its rising expat population. Here are 5 expat clubs in the UAE you should consider joining.

The Abu Dhabi Women’s Group is a meeting point for people across the world who share the same experience of being located to Abu Dhabi.It was formed to provide support to newcomers to the region and to encourage a sharing of common interests. Membership is open to all and is free. Run by volunteers, the Abu Dhabi Women’s Group organizes varied activities such as weekly coffee mornings, field trips and golf tournaments. The group is also involved in providing support to local businesses started by members.

This Dubai-based association was founded in order to create a support network for the Australian and New Zealand community in the UAE. Run entirely by volunteers, ANZA has been in operation for almost 20 years. It is open to Australians and New Zealanders of all ages and organizes a variety of activities for its members. ANZA also publishes a quarterly newsletter called ANZAakhbar, which provides information on the association’s different events and activities, sports news and other information that may be useful for the expat community in the UAE. It also helps to promote Australian and New Zealand products in Dubai. Some of the club’s annual events include the Australian and Waitangi National Day Celebration. ANZA is involved in raising funds for several different charities such as the Red Cross/Red Crescent Society and Gulf for Good. When the need arose, the members even got involved in fund raising for natural disasters that occurred in their home countries such as the earthquakes in Christchurch and the floods in Queensland.

The British Business Group, Dubai and Northern Emirates (BBG) was established in 1987 as a means to encourage and develop British business in the UAE. The group’s activities include connecting with decision makers, arranging networking and business events, and sharing of business practices. The BBG has a membership of over 2000 members, consisting of businesses in the Middle East and United Kingdom, operating in a variety of sectors such as construction, finance, event management, human resources and intellectual property. The BBG was awarded Best British Business Club in the World in 2010 and 2011, by The Telegraph Group.

The Abu Dhabi Triathlon club calls itself ‘the home for swimmers, cyclists, runners, triathletes, ironmen…and other athletes in the UAE capital’. Open to all nationalities and athletes of any level, from beginner to international, this club holds regular training sessions and related activities. Members also compete in regional and international events and train throughout the year. The club has an informal atmosphere and people are encouraged to simply turn up and take part in activities. Help is provided to members about where to train and what equipment to use. The sessions are likely to change during the year and it is advisable to check the type of events and timings beforehand. The club’s website provides details about permanent training sessions of each sport and also offers helpful tips and links to training programs.

The Dubai Drama Group (DDG) is a non-profit theater company that has been in operation in Dubai for more than 25 years.

Consisting of adult members of all ages, the group aims to bring together those with a love of community theater. The group has a committee that meets every month to plan activities and future events. DDG puts up a number of productions throughout the year and also organizes workshops for the members. It does not, however, have regular acting classes. Members are of varying theatrical experience and can choose to get involved in either an on-stage or off-stage capacity. The club issues membership on a yearly basis.