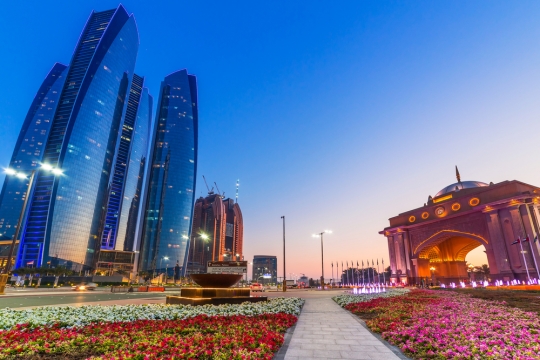 Transformed nearly overnight from sleepy coastal towns to glimmering metropoli by oil money, the United Arab Emirates have developed their economy in large part by spending generously on international talent. A large majority of the people living in the UAE at any given moment are non-citizens on temporary permits for work, and the United Arab Emirates have cemented their reputation as a place for the young and mobile to make money they can bring home at the end of their stay. While Dubai gets most of the international attention for its luxury resorts and towering skyscrapers, the federal capital, Abu Dhabi, also draws significant numbers of expats into its borders. For those seeking a bit less of Dubai’s glitz and glamour, Abu Dhabi can be a solid choice.Unfortunately, nowhere in the United Arab Emirates is an ideal home for LGBT+ people, even temporarily. Homosexuality is illegal under both federal law and the laws of the individual emirates. Being convicted of same-sex intercourse (‘sodomy’, in their preferred English translation) can lead to up to 14 years in prison, or even death by stoning, but sentences for expats are often commuted to immediate deportation. Arranging hotel rooms without separate beds leads to unwelcome scrutiny at a minimum and can be grounds for police interrogation.

Gender-nonconforming behaviour, including haircuts and jewellery that the Emirati authorities deem insufficiently masculine on people they read as men can also lead to legal action. The Emirati legal process is famously brutal, and people brought in as “gender-nonconforming men” can have long hair forcibly shaved and be otherwise made to conform with the local vision of masculinity even before being brought to trial.

Emirati authorities include transgender women, especially those whose legal documents still show male gender markers, in this category, and have destroyed hormone replacement therapy found in the possession of such women after bringing them in, even when those women were presenting in masculine ways to avoid scrutiny. Cisgender women face similar but slightly less intense scrutiny.

Abu Dhabi, as the federal capital and a city where expats make up a smaller majority of the population, is more conservative than its neighbours, making it a particularly tricky place to be openly LGBT+.

All of that being said, the operative word is ‘openly.’ While the United Arab Emirates is extraordinarily, violently conservative by Western standards, its cities and Abu Dhabi in particular are regarded as LGBT+ oases within the Arab world.

The underground, secretive gay subculture in Abu Dhabi is large and thriving, with knowledge of its events being spread by word-of-mouth between knowing individuals and so kept away from the authorities. Such events are as lively as those in any other place where LGBT+ people must hide, and so serve as vital nodes of connection between people who risk legal violence if the relationships between them become more widely known. Temporary residents are a large part of these events and are cautioned to not be visibly drunk or affectionate while entering or exiting in order to avoid bringing police scrutiny. Of course, for Muslim people and residents, alcohol consumption at any level is a legal offence.

Raids are not common but do occur, and lead to many arrests when they do happen. Outside of these spaces, discretion is the better part of survival. Emirati social conservatism includes finding even public affection between men and women gauche at best, and citizens are more than willing to directly advise visitors to stay within social norms when they don’t simply call the police.

Expats often seem, to local eyes, a threat to the moral purity of their homeland, and so local people keep an eye on them on that basis. Therefore, spending one’s time among fellow expats, who don’t usually exert the same pressure on others to conform, can be a welcome release valve.

For LGBT+ people who are accustomed to hiding their membership in the community, Abu Dhabi is perhaps only a little more intense than anywhere else. For a trans person whom onlookers and listeners consistently read as their chosen gender and whose documents reflect that gender, or a gay man or lesbian whose appearance contains no or only subtle markers of their sexuality, and who otherwise acts within Emirati social norms while in public, living in Abu Dhabi poses roughly the same challenges as anywhere else where one needs to conceal the nature of one’s attractions or relationships.

An expat in Abu Dhabi can expect to never be able to marry or even discuss their same-gender lover in the city or to be able to alter their legal documents to reflect a new gender using Emirati legal processes. They might not be able to consistently refill hormone replacement therapy in local pharmacies.

Non-binary expats should not count on acknowledgement of their gender in public and might be disallowed from entering the country if their documents include a non-standard gender marker. Emirati immigration processes also reject HIV positive individuals. The consequences of running afoul of the authorities are high, but thousands of LGBT+ individuals from throughout the Arab world and beyond come to Abu Dhabi for that bit of secret freedom they can’t find in their homelands, and an expat from further afield can make use of the same social tools to protect themselves during a short, lucrative stay.

The United Arab Emirates is currently relaxing its temporary residence protocols. Formerly, a would-be expat would have to secure employment within the UAE as a precondition of applying for residency, but new processes allow job seekers to remain in the country for extended periods of time while unemployed. There is not yet a way to switch from a tourist or visitor permit to a job-seeker or work permit, so an extended stay in Abu Dhabi is best considered well in advance.

Specific rules vary between countries of origin and over time, so consulting with the nearest embassy of the United Arab Emirates is always wise. Local services help to connect non-speakers of the famously difficult Arabic language with employment and housing opportunities. With healthcare coverage being connected to employment for non-citizens and English proficiency not particularly common among Emirati citizens, such assistance is usually vital for migrants.

Abu Dhabi is, to put it bluntly, the sort of place that LGBT+ people escape from in favour of more genuinely accepting locales elsewhere in the world, and organizations such as Human Rights Watch have condemned its abuses against the LGBT+ community. A thriving underground LGBT+ culture makes it more livable than most places with its reputation but doesn’t erase the danger. However, Abu Dhabi is also a short car ride from the scenic vistas of the rest of the United Arab Emirates and a short plane ride from much of southern Asia and eastern Africa, as well as being a good place to make a large amount of money quickly in the petroleum or nuclear-power industries, or as a teacher. In this paradoxical status as a dangerous, secret meeting place for large numbers of LGBT+ people from the broader region, it can be a good place for an adventurous LGBT+ expat to try to acquire the tools for a bright future lived elsewhere.

Just don’t offer your left hand to anyone, ensure you make your own private food and drink arrangements for Ramadan, and keep your status hidden.

Have you lived in Abu Dhabi? Share your experiences in the comments below, or answer the questions here to be featured in an interview!