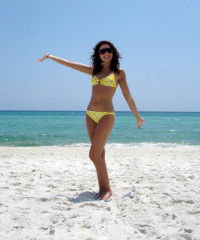 In recent days, visitors to the public beaches of the United Arab Emirates were met with some disheartening warnings: signs were placed along these beaches warning that skimpy or revealing attire such as bikinis and briefs are no longer welcome there. While exact penalties for this newly minted offense are unclear as of the moment, there is much talk of cash fines involved.

News of this unexpected regulation came from the Emirate of Ras-Al Khaimah [RAK], which currently accounts for over 4 million of the UAE’s residents and is occasionally seen as the next Emirate to follow in the footsteps of Dubai’s tourism success. Not being as oil-dependent as novice students of the Middle East might expect, much of the $25 billion local and foreign investment to have gone into RAK will clearly go towards further amenities and facilities to keep visitors happy. It is worth considering briefly how this ban can be expected to impact such outreach efforts.Thoughts on Local Customs

Though the great majority (some 80%) of residents in the UAE adhere to the Islamic faith, the individual emirates within the UAE are not monolithic in terms of their social conventions, and the state of Dubai is likely to remain more tolerant of Western-style swimwear than other states may be. The residents of this area have also not been living under rocks all their lives, and are well aware that visitors to the country harbor widely differing worldviews and often more permissive or libertarian attitudes.

While certain allowances will be made for these visitors, who are after all the lifeblood of the service-based economies in Dubai and elsewhere, there are still more than enough red lines demarcating unacceptable conduct. Little prohibitions like left-handed handshakes (locally considered the hand used for ‘unsanitary’ purposes) can still make or break an interpersonal deal or social engagement, and bared shoulders on either men or women have long been seen as a breach of conduct in public areas away from the beach. Customs not necessarily based in religious observance, but in a more all-encompassing respect for the health of the region, are becoming greater in number as well: see, for example, a 2009 ban on plastic shopping bags that began in Ajman and later spread throughout the UAE.

Will it Affect Local Tourism?

The consensus, for now, seems to be that this regulation will not be an irreparable drain on the tourist industry: after all, one of the favorite vices of Europe and the Americas – recreational alcohol consumption – has long been frowned upon within the UAE, requiring special licenses both for its sale and possession. It is interesting to note that, even without the widespread availability of this ‘social lubricant,’ the UAE enjoys a higher ranking in certain travelers’ polls than some countries and cities that are famous for the availability of such. Though this is hardly an impartial source, Dubai’s tourism board brags that Dubai is a more popular destination for visitors than Amsterdam, with its famously tolerant attitude towards intoxicating substances.

There also exists the possibility that the ‘bikini ban’ would be an enticement for future visitors rather than a deterrent. For those Westerners who chafe at public displays of affection and dislike exhibitionism, RAK may have just given them an additional reason to visit rather than deducting one. And for those who yearn for the chance to relax at the beach, yet feel less than physically perfect and do not want to feel pressured into a contest of showing off physical assets, this prohibition may also be an encouragement to visit.

Disappointingly, the rash of news stories to have arisen in the wake of this ban have not looked at it from this angle. It is also interesting that some of the more outraged commentary is coming not from prospective tourists, but from commentators who already have an ‘ax to grind’ with the UAE, had no plans to ever go there, and are unlikely to ever be personally affected by their regulations.

On the bright side, prospective UAE beach-goers will still have it easier than – should such a thing exist – visitors who find themselves holed up in their accommodation and needing to play a good old-fashioned violent video game. Many such titles have been banned due to their “contradiction of customs and traditions.”