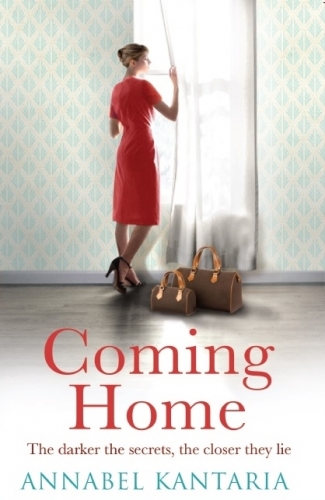 In 2013, she won the inaugural Montegrappa Prize for First Fiction at the Emirates Airline Festival of Literature. Her work caught the critical eye of top London agent Luigi Bonomi and Annabel went on to secure a three-book contract with Harlequin’s MIRA. Her debut novel, Coming Home (MIRA, May 2015), is the reworked version of the prize-winning manuscript.Annabel, please tell us a little about yourself.

I’m an author and journalist living in Dubai with my husband and two children. We’ve lived here for 17 years. I worked as a magazine editor before going freelance to bring up my children and focus more on my fiction. For nearly six years, I was the Dubai Expat blogger for the Expat Telegraph. I also write a column for Stylist Arabia magazine.

What attracted you to move to Dubai?

What do you like/dislike about expat life?

I love the lifestyle afforded us by living in a place that gets so much sunshine, and I generally like the way that most expats tend to be friendly and engaging and up for new adventures in a way that people who’ve never lived abroad are sometimes not. I also love being able to dip in and out of the UK as I please; having a foot in two countries is fun.

What I dislike about expat life in Dubai is its transiency – the speed at which people move on. I find it sad to see my children’s pain when their best friends leave and, on a deeper level, I find that the transient nature of Dubai’s expats can mean people care less about the city and other people as they know they’re not here long term. That’s hard to deal with.

You recently published your debut novel, Coming Home, what is the book about?

It’s about an expat called Evie, who, one morning, gets the phone call that every expat dreads: her father has passed away. She flies home to England to help her Mum sort out his affairs and, while she’s there she discovers a life-changing secret. After that, more and more secrets come tumbling out of the closet and Evie’s life disintegrates around her. It’s psychological suspense and is quite a dark read. People are often surprised how dark it is.

Is there a message or moral in your book for your readers?

There was a sentence I had in mind while writing the book: ‘can you ever really know your parents?’ We grow up living with our parents; we think we know them inside out – but do we really? Can we ever really know who they are as adults?

What inspired you to write, Coming Home?

As someone who has family – not least my mother – living overseas, I always dread the middle-of-the-night call to say that something’s happened, and I wanted to use fiction to explore that fear.

I’m also really drawn to the saying ‘every expat is running away from something’ – it seemed a good idea to create a character who is running away from her past, but who, because of that phone call she receives, is forced to go back and face her demons. The death of Evie’s father is the trigger she needs – otherwise she may well have continued running away all her life.

Can you tell us about your research process? What were the challenges
(research, literary, psychological, and logistical) you experienced?

Research: My degree is in psychology, so I had a good head start on getting inside the characters’ heads but I did a lot of research on grief disorders. I really enjoyed opening up my psychology books again and studying the damaged mind. It’s a real area of interest for me. I spent a lot of time reading around the topic when I perhaps should have been writing!

Another psychological challenge was wondering what people – specifically my agent – would think of the book when it was finished. Would I hand it in only to have him say ‘Annabel, what on earth were you thinking?’

As an author, you write in a vacuum. I don’t let anyone read my work , so I have days when I think my writing’s on fire, then other days when I think I’ve written complete rubbish. Without someone there to tell you that you’re doing okay, it can be quite an emotional rollercoaster and it can be hard to generate the self-belief you need to get through to the end. And don’t get me started on the hopelessness of it all. I’m sure I’m not the only author who spends swathes of time wondering ‘Is it even worth it?’ Without a book deal – which I didn’t have when I wrote Coming Home – you don’t even know if your hard work will ever see the light of day.

Logistical: The biggest logistical challenge while writing Coming Home was finding the time and headspace to write the book. My youngest child was three when I started the book, and he finished school at 1pm. Once he was home from school, I had to stop work so my days were pretty short, and I had my journalism work to do as well.

What type of audience do you feel your book appeals to?

As a successful author what tips can you offer aspiring expat writers?

It’s been said so many times it’s a cliché, but write. You can’t edit a blank page. If you write just 1,000 words a day, you’ll have enough words for a manuscript in 90 days – and then you have something to get your teeth into. Put it aside for a few weeks, then read it again, and you should start to see how the story needs to be changed.

Also, my advice is to live as much as possible. Say yes to opportunities, try new things, meet new people. Every single new experience you have will enrich your writing.

I’m currently working on the edits of my second novel, The Disappearance, which is out in spring 2016. When the edits are done, it’s heads down and onto my third book, which has to be completed by July 2016.

I hope to continue writing – hopefully more fiction, but maybe something more factual about life in Dubai. We’ll see!

Where can people buy Coming Home, and in what formats is it available?

Coming Home is currently available in all good bookshops in the UK and in the UAE. It’s available as a book, for the Kindle and as an e-book on Amazon, Apple or Google.