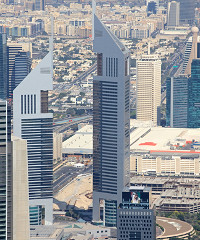 The United Arab Emirates [hereinafter UAE] are a federation of seven different principalities each governed by its own emir: Abu Dhabi, Dubai, Sharjah, Ajman, Umm al-Quwain, Ras al-Khaimah and Fujairah. Since the early 1960’s, these federated states have advanced in prosperity largely on account of their oil exportation. Abu Dhabi, which led the charge among the emirates in this respect, came to share the wealth with the surrounding area, and some 50 years later the CIA World Factbook has listed the UAE as having the 10th largest per capita GDP in the world (this places it, impressively, above the significantly larger nation of Canada, and a full fifteen places ahead of the United Kingdom, although more recent estimates have seen the UAE’s ranking drop to 13th.)UAE Industries at a Glance

The popular stereotype of the UAE economy is that it is wholly reliant on the aforementioned oil exports, but this is not entirely accurate. The amount of gross domestic product that is received from oil and gas production is only, in fact, 25%, and the diversification of the economy in recent years is a trend that the government aims to continue.

The service industries make up the largest sector of employment in the UAE by far, at 78% of the workforce (this number is probably larger still within Dubai), with particular emphasis on the hotel and restaurant businesses.

The UAE’s manufacturing base is exemplified by the port city of Jebel Ali near Dubai, where over 5,500 companies are said to have facilities, and where around 200 factories are also in operation. Non-agricultural export goods locally manufactured in the UAE include cement, fertilizers, textiles and various construction materials; while the agricultural business does a good trade in dairy products, fish, dates and vegetables. The construction industry is one other industry that, in lieu of a sort of ‘housing bubble’ within the area, will likely continue to generate employment for a few years.

Foreign Outreach within the UAE

The UAE has something of an odd demographic situation when it comes to labor: the nation has been a region powered by an increasingly transient workforce since the 1970’s, and it has been estimated that nationals of the region make up only 10 percent of the total population, and one percent of the private sector workforce since the country’s formation. (i) Foreign investment in the nation is also being encouraged via the creation of a tax-free Free Trade Zone (regions of the UAE not counting as Free Trade Zones require at least 51% local ownership.)

Offshore incorporation is another option for doing business in the region, which requires the services of a local agent to aid in registration, but can be done even if the business in question has only one employee. Though it is wise to perhaps consult first with other investors or entrepreneurs who have taken this road, local websites encouraging this activity project a “hands-off” or non-interventionist image, promising that financial records will not be audited except “in case of suspicion.”

Friendliness to non-native business concerns is not an absolute condition, though, and one recent incident stands out as an example of this. The nation’s 2010 decision to ban Blackberry email and web browsing services – which raised the ire of not only 500,000 local users, but also foreign nationals passing through the region’s airports – was one such major exception. The state news agency WAM noted how Blackberry “is the only device operating in the UAE that immediately exports its data offshore and is managed by a foreign, commercial organisation”. (ii)

What to Expect From UAE Employment

Those who successfully relocate to the UAE will encounter a number of working hours and holidays similar to what could be expected in the major English-speaking economies of the world: the average UAE employee works 5.3 days with 28 days of vacation time. In the vast number of cases, health insurance is also provided by employers within the region.

Interestingly, less than 2% of the total workforce in the UAE possesses a doctorate degree (this is not to say the workforce is uneducated, as over 80% of it does possess a university-level education.) This points to a situation where a doctorate degree may be something of a rare and respected commodity in the area, although it is difficult to tell whether the low number of such employees in the UAE results from a difficulty of attaining this level of education, or of an indifference to it (i.e. a prioritization of work experience over education level.)