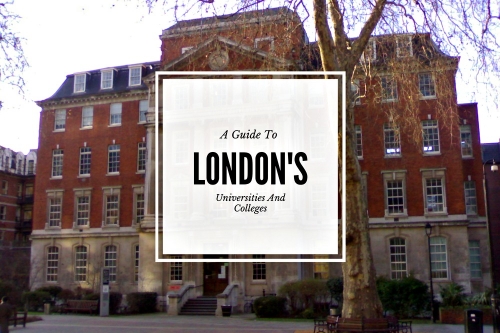 Getting a degree from a recognized university in London is like a dream come true for almost any student. Educational standards across the UK are known to be among the best in the world, and moreover, the degrees that are validated by recognized accreditation bodies in the UK are accepted in almost every country around the world.London is home to over 45 well-reputed universities and colleges. There are more than 400,000 foreign students studying in this city, a number that makes up around 26% of the total student population.

Apart from the great quality of education, students are attracted to London because of its high living standard, infrastructure, placement opportunities and social life. Not even the high cost of living deters the students who plan to study in this city.

Read on to find out which are the top universities and colleges in London.

Established in 1826 to provide higher educational opportunities to all those who had been excluded from it, University College London became the first institute in England to admit female students on equal terms as the male students.

Most commonly known as UCL, it has become the number one college in London after overtaking Imperial College London; currently, it also ranks 7th in the world. University College London is extremely popular not just with the local population but with international students as well. They account for more than one-third of the total student body.

Being a multidisciplinary college, UCL offers its students a wide range of subjects, which is what really gives this college an edge over the others. Moreover, it has a high percentage (more than 50%) of post-graduates. The academic to student ratio is the best in the UK at 1:10 – their small classes allow better individual support.

UCL’s faculties and teaching centers are located in the heart of central London, very close to the British Library, and close to some other well-known universities. Its main campus is just a short distance from Soho, London’s entertainment hub, as well as Oxford Street, one of the main shopping districts.

For more information on admissions, you can get in touch with the university authorities on:

On July 8, 1907, the Royal College of Science, The Royal School of Mines and the City & Guilds College came together to form Imperial College London, a science-based institution, known today for excellence in teaching as well as research.

Imperial College London currently ranks 2nd in the UK, 3rd in Europe and 8th in the world. It is home to more than 14,500 students and around 8,000 staff members. This institute holds a very strong global appeal; one-third of its total student body is made up of international students from 125 different countries.

Unlike its competitors, Imperial College London focuses on 4 main disciplines: Science, Engineering, Business and Medicine. The university is famous for applying these skills to enterprise and industry. At this place, engineers are known to work alongside clinicians, mathematicians collaborate with businessmen and scientists rub shoulders with designers. The dynamic environment of interactive discovery keeps students excited about what they learn each day.

Its main campus is located in South Kensington, which isn’t far from the city center. Students find themselves close to Hyde Park, Royal Albert Hall, Harrods and many of London’s top museums.

To learn more about enrolling, get in touch with the authorities on:

This well-known institution was founded in 1828 by a group of distinguished politicians and churchmen in the tradition of the Church of England. In 1829, it was granted the royal charter by King George the IV. The faculty of King’s College London played a very important role in 19th-century science as well as extending opportunities for higher education to women and working men in the form of evening classes. Twelve individuals associated with this institute (and its affiliates) have been Nobel Prize winners.

Today, King’s College London welcomes students and teachers of all faiths and beliefs. Over the years, it has evolved into a comprehensive, research-led university. It currently ranks 3rd in the UK and 19th across the globe. International students make up about 20% of the total student body and postgraduates constitute around 40% of the 26,000 students.

King’s College London has gained a reputation for being the best in courses pertaining to Humanities, Law and Sciences, including Health Science.

It is also known to be the most “centrally located” university in London. Of the 5 campuses in the city, 4 are situated quite close to River Thames as well as other iconic landmarks like Big Ben, London Eye and Tower Bridge.

Find out more about the college and the procedure to sign up, by contacting the office at:

In the October of 1895, London School of Economics and Political Science (usually referred to as LSE) opened its doors to students for the first time.

Today, the institute has climbed an impressive 36 spots to rank 35th across the globe, alongside other well-reputed universities: Stanford, Harvard & UC Berkley. In fact, LSE gets a higher position in the individual rankings of various subjects. It boasts of a cosmopolitan student body with close to 9,300 students from 145 nations. You will hear more than 100 different languages being spoken on the campus. Of course, English is the main language for education.

LSE has been known as a world-class institute for the research and teaching of social sciences, including International Relations, Economics, Politics, Finance, Accounting, Law, Anthropology and Sociology. It has the highest percentage of world-leading research of any university in the country.

Like many of the other top universities, London School of Economics is located close to the heart of the city, near Chancery Lane, an area historically associated with the legal professions. Located just to the north of the river, it is within walking distance of the British Library and is relatively close to Trafalgar Square.

You can find out more about the admission formalities and other details by getting in touch with the office at:

This institute ranks 9th in the UK and 109th in the world. Of the 21,187 students across all the campuses, 7,818 are from different countries (around 150) and 1,927 are from within the EU. International students make up close to 40% of the total study population. The university prides itself on the support provided to overseas students. It also offers assistance to students who are seeking employment through their in-house job portal. Queen Mary University of London is among the Top 10 universities in the UK in terms of graduate starting salaries.

This institute offers more than 240 degrees across 3 faculties: Humanities and Social Sciences, Medicine and Dentistry and Science and Engineering.

All five campuses are located close to the heart of the city. The main campus is situated at Mile End, while the others are in Whitechapel, Charterhouse Square, Lincolns Inns Field and West Smithfield.

For more information on this university, get in touch with the officials at:

The Royal Holloway College was set up in 1886 by the Victorian philanthropist and entrepreneur Thomas Holloway. Greatly inspired by the Chateau Chambord in the Loire Valley, this institute was opened by Queen Victoria. Since then, Royal Holloway has grown in size and status, building on the excellence and talent of its students.

After climbing 44 places this year the institute ranks at 231st globally. In terms of international outlook, it ranked 1st in the UK and 5th in the world by Times Higher Education World University Rankings in 2014. About one-third of its student population of 9,000 is from outside of the UK, representing 130 different nationalities. There are 60 student societies and at least 15 of them have an international flavor.

Royal Holloway is one of the leading research-intensive universities, with 19 different academic departments that span Humanities and Social Sciences, Management, Economics and Arts.

While most of the top universities in London are centrally located, Royal Holloway is a bit further out, near the town of Egham. This offers students a suburban experience, while they remain close to the heart of the city and can pop up for a day trip.

To learn more about this university, contact the office at:

School of Oriental and African Studies

Europe’s only Higher Education Institution to specialize in the study of Asia, Africa and the Middle East was established in the year 1916. School of Oriental and African Studies (SOAS) received its royal charter on June 5, 1916, and granted admission to its first batch of students on January 18, 1917. A month later, it was formally inaugurated by King George V.

After climbing more than 55 places since last year SOAS ranks 275th globally. More than 50% of its 5,000 students are from outside of the UK, representing 133 countries. In addition to that, around 3,600 students from different part of the globe have signed up with this institute for distance-learning programs.

SOAS offers a broad range of Research and Masters Programs in the faculties of Humanities, Social Sciences, Law, Arts, Culture and Languages.

This university is located in the Bloomsbury area of London, which is known for its beautiful garden squares. You will also find a few academic resources close by, including the British Library and the Senate House Library.

To get in touch with their office, reach out to:

You will also find a fair number of foreign institutions operating in London, without Royal Charters. Some of them are bona fide universities and their degrees are validated by renowned accreditation entities in the UK or overseas. At times, foreign universities conduct study-abroad educational programs in London. However, these are usually restricted to students who get their degree from the same university campus in their home country. Some of the more well-known colleges in London that offer foreign degrees are:

Not all foreign institutions and universities offer degrees that are validated by recognized accreditation bodies. It is, therefore, important to check affiliations and other details before seeking admission to any of the institutes mentioned above.