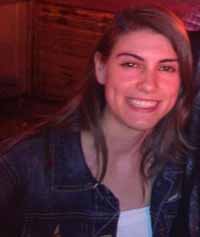 My name is Catarina Bras, I am 26 years old. I was born in Portugal and lived majority of my life in Queluz with my family.

I studied Communication and Technology back in Portugal. When I moved to England, I enrolled on a Web Design course, where I obtained an ABC Level 3 Award in Web Production.

I currently work for a major UK airline, where I have worked for over 8 years. I am part of the Retail and Online team, which I really enjoy working for.My main hobbies are, spending time with friends, going to the cinema, keeping fit, working on small projects such as logo designs, building websites and translating documents/websites from English to Portuguese and vice versa.

One of my passions is travelling. I have visited several countries, including Holland, Spain, Poland and Italy. By far Italy has been the best place I have ever been to, where I spent a month and learnt to speak Italian fluently.

In September 2004, my best friend and I decided to move to the UK with the intention of staying for six months only.

My best friend’s mum and sister had moved to Luton a few years earlier and we decided to join them.

The main reason for my move, was the death of my father and the emotional memories Queluz brought to me. Some other reasons which influenced my move, was the difficulty in finding a job. As at the time unless you had a lot of experience and held a degree it was near on impossible to get employed.

I came looking for an opportunity to build a better future, and although the intention was to only trial it for six months, things worked out for the best and I decided to stay.

The challenges I was most faced with during my move, was the adaptation to the English language. Although we learn English as part of our school curriculum, this never really prepares you for having to use the language every single day to get by.

I found it hard to understand the English accent, especially with so many variations depending on where in the country you come from. It took me almost one year to actually get out there and communicate with others apart from my Portuguese friends. I was frightened of making grammatical mistakes and making a fool out of myself.

This fear quickly went away as I started to interact with others and making English friends.

I was lucky to already have a job interview booked when I moved here, this was however a temporary job which lasted until Christmas. Afterwards, I was faced with the challenges of finding a permanent job. I was registered with an employment agency and all jobs that came my way seemed to just be temporary. I had a few random jobs, such as data entry to stripping cables, before I finally found something enjoyable and permanent.

I moved to my friend’s mum’s house, finding somewhere to live wasn’t really an issue. It was hard as we had to share the house between all of us, so it was at times a bit crowded and there was no privacy.

As I started building other friendships, I was invited to move in to one of my close friend’s house. This allowed me to save enough money to then move out and rent a two bedroom house with another friend. However, a year into the rental contract, her job required a re-location to London, which it wasn’t in my plans.

I started looking for alternatives and eventually found the maisonette I currently live in. It took me a long time and a lot of money spent to finally have my independence.

I think the hardest thing, is deciding to live on your own and having to pay up-front for rental deposits and then sustain the bills involved in running a house.

Yes, there are several other expats in the area. I am happy to say that perhaps majority of the Portuguese expats are my friends, who eventually moved over to Luton too in search of better futures. There are at least 15 of us in currently in Luton who all consider England as our home now.

Luton is served by an airport which is located less than 20 minutes away from the town centre. The airport has several flights to various countries within Europe, making it easier for anyone to travel around.

For this reason, Luton is a town where a lot of expats currently reside. There are big communities of Polish expats, Lithuanian and several other nationalities.

My relationship with the locals is very good. I now have a lot of friends around this area, excluding my Portuguese childhood friends, and I enjoy my life as if I was always part of this town.

I have never experienced any bad comments for being from a different nationality. In fact, when talking to several locals, when they find out that I am from Portugal, they always have a holiday in Portugal story to tell!

I live in a really nice area of Luton and the neighbours are very friendly. I have a good relationship with my downstairs neighbour and I really enjoy it.

What I like the most about my life, is my job, I work within the travel industry and I get to interact with a lot of people. My current role, gives me a lot of satisfaction by doing what I enjoy.

I am also very happy with the people I have met so far, since I have moved to Luton. I have met some incredible people who have taught me so much and who I could not live without.

One other thing that makes me like Luton is the fact that the airport is very well located and has a direct flight from Luton to Lisbon and in less than three hours I am back in my home country.

I dislike being so far from my family, but this has made me realise how much they mean to me and has made my relationship with them even stronger.

Even after 10 years, I seem to still struggle with the weather. I find it hard not being able to lie on the beach enjoying the sun and taking a dip in the sea.

One thing I miss quite a lot is Portuguese dishes, which are hard to find around here. I normally travel to Bedford, just over 20 miles away, to eat at a Portuguese cafe. Alternatively, a 45 minute train journey will get me into London, where I can visit Stockwell, mostly known for its Portuguese community.

My advice would to anyone following my footsteps is, be prepared to build your life here, don’t just think it will be a short term visit and one thing is certain, you will not leave the country rich unless you win the Euro millions!

Most people assume that by coming to England, they will earn a lot of money fairly quick. It is right that wages are higher than in Portugal, but it is also worth mentioning that the cost of living is substantially higher and therefore you earn for the life you are expected to live.

Another thing I would advise others on is there are a lot of jobs out there and sometimes you may have to go through random temporary jobs before you reach something you enjoy doing. But just do not give up and don’t be put off by having your applications declined. Remember your time will come when you are ready for it!

Although I live everyday like it was my last, my immediate plans for the future are buying a car. I am looking into leasing a Citroen DS3, which I absolutely love.

Once the car plans are out of the way, I am looking to put together a “Bucket list” of things I would like to do and places I would like to visit. Some of these will include a Warner Bros Studio Tour, a Banksy London Tour, holidaying in Egypt and many other places. It will be a vast list and random list for sure.

In an ideal world, my biggest plan would be to live closer to my mum, but I have been further to convincing her to move with me!